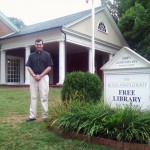 The Queen Anne’s County Department of Public Works – Division of Engineering and General Service’s (QAC) does more than balance budgets every day. The agency has a three-pronged mission to respond promptly to customer service concerns, safeguard the environment, and respect its cost-conscious citizens. By working with the Maryland Energy Administration (MEA) and the Department of Energy’s (DOE) Energy Efficiency and Conservation Block Grant (EECBG) program, QAC was empowered to meet its mission while reducing energy consumption and lowering energy costs.

QAC immediately responded to the grant advertisement, and was one of the first counties to complete its projects, which totaled $282,692. These projects included installing efficient heat pumps at the QAC Office of the Sheriff, a solar energy system at the Detention Center, and HVAC upgrades to both the Centreville and Kent Island libraries. In all, QAC is saving almost 200 megawatts of energy per year, which is the equivalent to powering 15 homes for a year or removing 23 cars form the road for a year. It also results in an annual cost savings of more than $20,000!

According to Queen Anne’s County Commissioner Philip L. Dumenil, “These are projects that the county has been putting off for years due to budget constraints, but were able to complete with the EECBG funds. Furthermore, we were able to generate enough energy to offset a significant portion of our detention center’s lofty electric consumption.” Dumenil also noted that Queen Anne’s County is “required by resolution to decrease our county government greenhouse gas emissions by 20 percent within the next three years, and with the energy efficiency and solar generation projects, we will be well on our way toward achieving this goal.”

John Scarborough, the County’s Chief of Engineering, found he enjoyed the fruits of the labor involved with these projects. According to Mr. Scarborough, “Completing projects that reduce energy consumption make me feel great. They are pleasure to do, and give one a rewarding feeling.”

QAC Warden Lamonte Cook took a more pragmatic view by noting that, “Public safety agencies, including the Detention Center, are 24/7 essential operations that require higher than average usage of energy. The solar panels are an efficient way to help manage energy costs without impacting daily security and administrative services.”

Under the EECBG program, the 10 largest Maryland counties and the 10 largest Maryland municipalities (based on population) received grants directly from the DOE. MEA manages approximately $9.6 million in the State’s remaining EECBG funds, which the agency uses for projects in the remaining counties and municipalities. All local government EECBG projects were completed by August 2012.