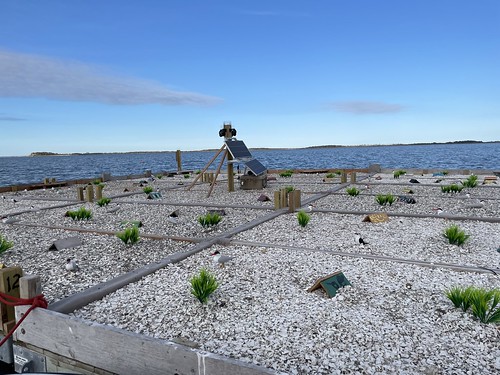 The project, now in its second year, is providing a floating wooden-framed platform as a nesting site for endangered colonial waterbirds, which have declined by a staggering 90-95% since the mid-1980s due to sea level rise and the erosion of their natural barren sand nesting islands in the coastal bays. The initial year of the project was an immediate success. The platform was successfully used for nesting by 23 pairs of common terns, making it the largest breeding colony of this species in the Coastal Bays in 2021.

“The immediate success of the project is encouraging,” said Director of Bird Conservation Dr. David Curson of Audubon Mid-Atlantic. “But the fact that the largest Common Tern colony in the coastal bays system last year was on this small artificial island illustrates just how dire the situation is for these birds. In 2003, there were more than 500 pairs of Common Terns nesting at six natural colony sites in the coastal bays – today, most of these former sites have been degraded by erosion and some have been washed away entirely.”

This year the partnership has expanded the size of the nesting platform from 1,024 square feet to 2,304 square feet, by adding five new raft sections to the four used in 2021. The rafts are latched together in a square formation that flexes at the joints as waves roll beneath it. This design allows the platform to safely withstand large waves and strong winds during storm events.  The project team hopes the larger platform will not only support a larger tern colony, but also may attract Black Skimmers to nest alongside the terns.

The project team has also expanded in 2022. Maryland Coastal Bays Program hired Archer Larned, Ph.D., to the newly created position of Coastal Bird Habitat Coordinator to assist with the project, using funds provided by US Wind. “We will monitor the platform closely through the 2022 breeding season,” said Larned. “Early signs are encouraging. Remote cameras installed on the platform show that about 50 Common Terns are already using it for roosting, and we are hoping that nesting activity will begin soon.”

Dave Brinker, of Maryland DNR Wildlife and Heritage Service, has been monitoring colonial nesting waterbird populations in Maryland since 1985.

“This project shows great promise in offering endangered colonial waterbirds much-needed nesting sites,” Brinker said. “But in order to fully recover and sustain populations of terns and skimmers in the coastal bays it is essential that we restore and maintain former sand islands that have been lost to erosion. To achieve that we will need a long-term strategy that allocates locally dredged sand for island restoration.”

“Addressing the population declines of these important bird species is a high priority for our department and our partners,” said Jeannie Haddaway-Riccio, Secretary of the Maryland Department of Natural Resources. “We are pleased to support innovative measures and long-term efforts to give them the best possible chance to rebound.”