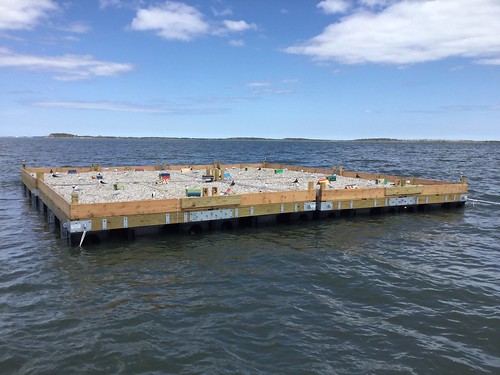 Due to shoreline erosion and sea level rise in the coastal bays, populations of certain colonial nesting bird species have declined by a staggering 90-95% since the mid-80s. These species typically nest on islands in small colonies on barren beaches.  The lack of suitable nesting area on these eroding islands has resulted in a loss of sufficient nesting areas for these populations to flourish.

“Island-nesting terns and skimmers in the Coastal Bays are in trouble and are on the cusp of being extirpated – or wiped out – from Maryland as breeding species,” explains Director of Bird Conservation Dr. David Curson of Audubon Mid-Atlantic. “As suitable habitat for these birds dwindle from effects of a changing climate like shoreline erosion and sea level rise, it’s more important than ever to do what we can to keep them as part of the coastal ecosystem. We need a two-pronged strategy of ongoing sand management to maintain their natural islands to combat erosion, and provide artificial habitat as an interim measure until the species populations are stable again.”

This year the group has undertaken a pilot project to establish an artificial island to imitate the characteristics of an ideal nesting beach for these birds. This project also uses a social attraction method that draws in seabirds to the platform with social cues, using bird decoys and audio recordings of bird calls. This model and technique has worked in other parts of the U.S., and in Canada and Europe, including restoring the puffin population in the Gulf of Maine.

Local wood artisans John Collins and Todd Peterson helped to design and construct platforms that were loaded with crushed clam shell for the birds to nest upon and anchored in an undisclosed location in the coastal bays. Local community groups constructed chick shelters and decoys were placed to attract common terns and black skimmers to this new ideal nesting ground.

The nesting platforms will be monitored throughout the season. If this project is successful, then consideration will be given to launch more in the following years to protect and preserve our diminishing colonial waterbird population.  Roman Jesien, of the Maryland Coastal Bays Program states, “we hope that these nesting platforms work in the short-term while we continue our efforts to restore and conserve our natural islands for the long-term.”

Dave Brinker, regional ecologist for the Maryland DNR Wildlife and Heritage Service, has been monitoring colonial nesting waterbird populations in Maryland since 1985.

Maryland DNR is providing technical assistance, materials, and funding through federal Pittman-Robertson funds the state receives from the U.S. Fish and Wildlife Service. Match for these federal funds comes from Maryland Program Open Space funds used to purchase land for state Wildlife Management Areas and from the Chesapeake Bay and Endangered Species fund, a voluntary state income tax checkoff. Audubon Mid-Atlantic and National Audubon are providing technical support and assistance with planning, coordination, and raft construction under a contract with MD DNR. Maryland Coastal Bays Program is assisting with planning, coordination, and volunteers.

“The steep population declines in these important bird species warrants our immediate attention,” said Jeannie Haddaway-Riccio, Secretary of the Maryland Department of Natural Resources. “We are pleased to assist with this interim measure as well as long term measures to give them the best possible chance to rebound.”