If You Build It, Will They Come? An Artificial Island May Be the Lifeline Maryland’s Common Terns Need The sections of nesting platforms are assembled, locked together, and anchored for the summer nesting season (photo by David Harp for Audubon)

Under a bright blue sky in early May 2021, about 20 people gathered at a boat ramp south of Ocean City, Maryland, to launch an unusual structure into Chincoteague Bay: a makeshift island that could be common terns’ best chance to survive in the region. The volunteers wheeled eight 8-by-16-foot wooden platforms into the water and connected them two at a time. Then a backhoe operator coated them with crushed clam shells, and—painstakingly slowly—a boat captain pulled each quadrant to an undisclosed location that would provide protection from curious tourists, hungry predators, noisy boats, and extreme weather. There, the team bolted everything together to create a single floating island the size of a small apartment.

Voilá, nesting habitat for dozens of common tern pairs. Or so conservationists hoped. This was the first seabird nesting raft ever attempted in the Mid-Atlantic, and there was no guarantee any terns would make use of the real estate. Without the raft, however, wildlife biologists feared that this feisty seabird could disappear from Maryland entirely. The state’s Coastal Bays region was designated an Important Bird Area in 2009 due to its tern and skimmer nesting habitat, but royal terns and black skimmers haven’t nested successfully in recent years. Common terns, the raft’s target species, are still around, but their numbers have plummeted from roughly 2,500 pairs statewide in 1985 to about 600 pairs in 2018 (the most recent official count). 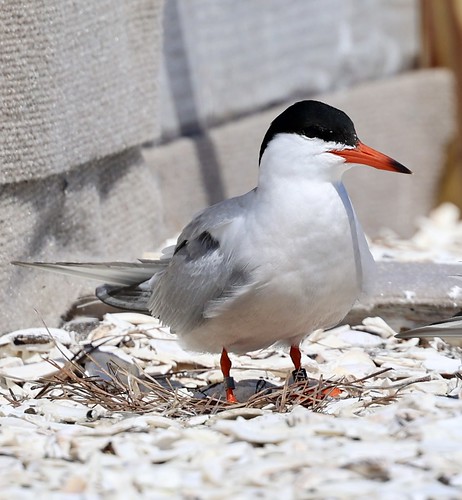 Banded common tern on the artificial island (by Kim Abplanalp)

The terns’ decline mirrors the disappearance of their preferred nesting islands in the Chincoteague Bay, which is sheltered by a barrier island that runs parallel to the coast. Historically, powerful winter storms would rupture the barrier island and water and sand would rush into the bay, washing away some islands and forming new ones. In 1933 that dynamic system changed. After a hurricane burst a hole in the barrier island on the south end of Ocean City, separating it from Assateague Island, the city made its newfound access to the Atlantic permanent.

Now islands in the bay wash away when water surges into the Ocean City Inlet, but they are no longer naturally replenished. Sea-level rise compounds the problem: the region had three times more days of coastal flooding between 2005 and 2014 as it would have had without the impacts of climate change, according to nonprofit Climate Central’s Surging Seas Risk Finder tool.

In the fall of 2020, one of the only remaining nesting islands disappeared, forcing many of the region’s terns to look farther afield for secure sandy stretches this spring, says Dave Curson, Audubon Mid-Atlantic’s director of bird conservation in Maryland. Members of Maryland’s Department of Natural Resources, Audubon, and other non-governmental organizations are interested in rebuilding some of the lost islands, but the permitting and planning process could take years. “The raft is an interim measure to give common terns—and hopefully black skimmers—nesting sites now,” he says.

Dave Brinker, an ecologist with the Maryland Department of Natural Resources, took inspiration for the ersatz island from a project in Toronto, Canada, where Lake Ontario’s levels are kept artificially high for shipping lanes, submerging historic nesting islands. Since the 1990s, rafts have hosted common terns, with generation after generation returning to breed, says Andrea Chreston, project manager at Toronto’s Tommy Thompson Park. “For us, the tern rafts have been a very successful design.”

Brinker based the raft design on those in Canada, but he customized it in collaboration with two local wood artisans. They installed wheels to ensure the raft could be easily pulled out of the bay in winter and materials to help it withstand salt water and choppier coastal weather. In the weeks after the launch, he made several trips to the newly assembled nesting island, adding flourishes to make it even more attractive, like a realtor staging a home to impress buyers. To catch the birds’ attention, he populated the structure with custom-built decoys of adult terns and set up speakers playing their calls. He put out little wooden boxes that could shelter vulnerable chicks. He did his best to create an ideal spot for terns looking to settle down and raise a family. 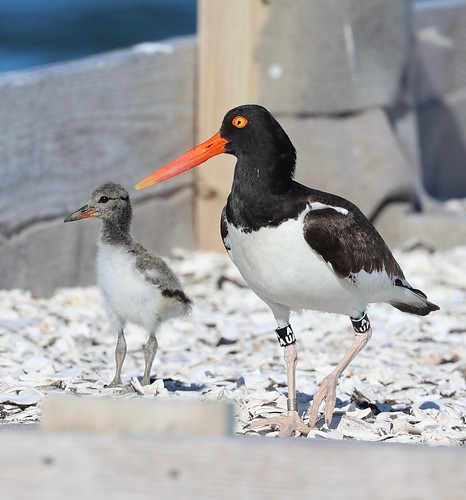 American oystercatcher with chick on the artificial island (by Kim Abplanalp)

A week passed. Then another. The only terns Brinker saw on his visits were made of plastic. June arrived with one avian pair in residence: American oystercatchers.

Brinker installed a camera on June 15 in hopes of better understanding what was going on. He saw the oystercatchers chasing common terns on the raft. But within a week the tide turned: terns outnumbered other birds and had taken control of the territory. On June 23 a tern laid the colony’s first egg while Brinker was installing yet more cameras. “That gave me a really good feeling,” he says.

By late July the raft no longer looked like a life-size diorama. Terns swooped and squawked; pairs dipped their heads in courtship. Diligent parents incubated speckled eggs, while fuzzy chicks beat the heat under wooden shelters. There were 20 active nests, eight hatchlings, and more on the way. A colony of this size could produce up to 60 chicks, Brinker says.

This late-blooming colony was the largest common tern nesting site in Worcester County last year—a bittersweet fact for Curson and Brinker. “It shows just how valuable this floating island is, but it also shows how rapidly they’re declining,” Curson says.

Still, the success could pave the way for rafts to be incorporated in future seabird conservation projects. “The problems in the Coastal Bays are typical of problems for coastal birds all around America’s coasts,” Curson says. “Providing protected nest sites is really key to conserving colonial waterbirds.” 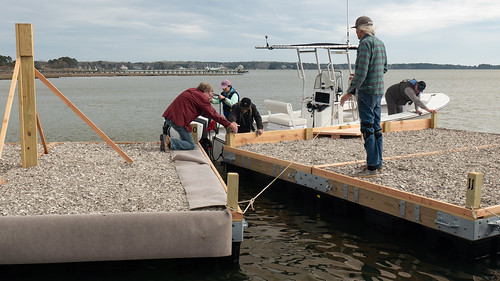 Installing the artificial island in 2022 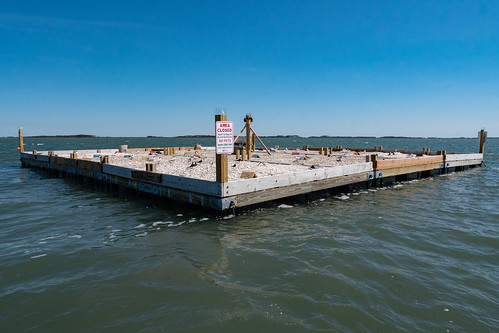 Artificial tern island in the spring of 2022

This year the partnership has expanded the size of the nesting platform from 1,024 square feet to 2,304 square feet, by adding five new raft units sections to the four used in 2021. The remote cameras show that about 50 common terns are already using it for roosting. This return may signal the appeal of the floating island to newcomers, growing the colony and making strides toward common terns once again being a common sight along Maryland’s coast.

Rachel Fritts is a science writer based in the Washington, D.C. area. This story originally ran in the Fall 2021 issue of Audubon Magazine.