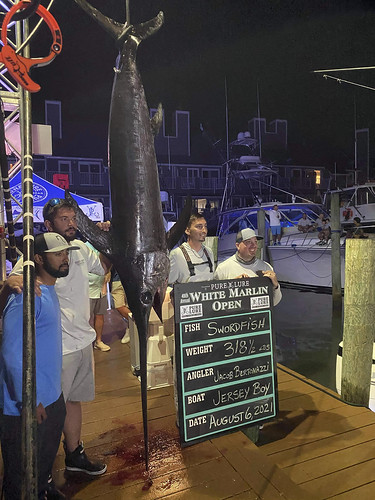 A New Jersey angler is now the second officially recognized state record holder for swordfish, which he caught in a tournament August 6 at Ocean City.

Bertonazzi was deep dropping with squid on a circle hook when just minutes before the tournament ended he caught the record swordfish.

“We were having a slow week … not having anything,” Bertonazzi said. “We had 15 minutes before the end of the tournament when it started taking (the bait).”

It took nearly two hours for Bertonazzi to reel in his record swordfish which he called a “mind- blowing experience.”

The swordfish weight was officially certified by Alex Davis, weighmaster for the White Marlin Open, at Harbour Island Marina. A Maryland Department of Natural Resources biologist confirmed the catch.

The previous record was set by 36-year-old Peter Schultz of Annapolis in late July. Deep dropping for swordfish has gained in popularity over the last few years, resulting in more catches of large swordfish. The two record fish caught in a short time period is similar to 2019, when two record dolphinfish (mahi-mahi) were caught a few weeks apart.