Natural Resources Police Escort Sea Turtles Back to the Wild 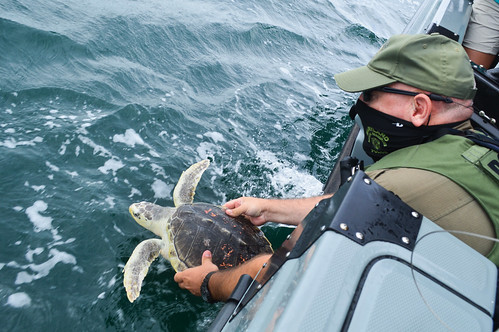 On Sept. 9, officers met with aquarium representatives along with two Kemp’s ridley turtles and one green sea turtle. The turtles, Mozzarella, Stilton, and Halloumi, were rescued last year with symptoms related to cold stunning — a condition caused by a dramatic decline in water temperatures affecting the cold-blooded turtles — including pneumonia, respiratory distress, dehydration, infection, and emaciation.

After being successfully rehabilitated by the Baltimore aquarium, the turtles were ready for release back into the ocean. To provide a proper and safe send-off, NRP offered to use their patrol boats for the release.

Once they were a few miles offshore at a secure spot, the officers delicately placed each turtle in the water. After a few seconds, the turtles disappeared into their underwater home.

Cold-stunning of sea turtles and marine mammals can occur from late October to early winter. The immediate impacts can cause some species to become slow and unresponsive, making them dangerous to themselves and boaters.

Anyone who sees an unresponsive or lethargic sea turtle or marine animal in the water or on the beach should call the Maryland Marine Mammal and Sea Turtle Stranding Hotline at 800-628-9944. The hotline is manned year-round, 24 hours a day.