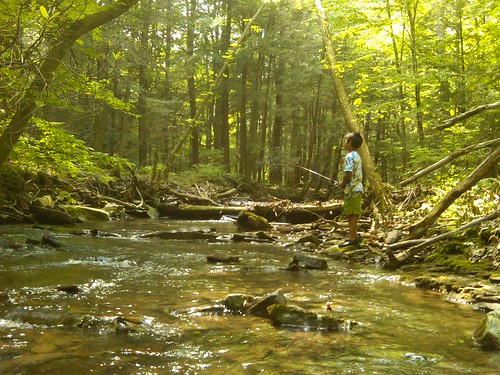 Let the sun shine and warm the landscape and waters of Maryland this week. After several days of rain, cold temperatures and a root’n toot’n northeaster, I think we’re all ready for some dryer and warmer weather. The rain does bring out the green in everything, and this is a marvelous time of the year to be outdoors. A whole new opportunity has opened up for those who fish for striped bass in the Chesapeake as the minimum size has dropped down to 20 inches. The water clarity in the middle and lower bay is amazing right now, so get out there and enjoy the outdoors; they’re out there waiting for you.

Before we jump in, here is a quick reminder that Maryland will once again be having free fishing days in June and July, providing a unique opportunity to fish the state’s waters without obtaining a fishing license, stamp or registration.

The floodgates at the Conowingo Dam closed this past Sunday for the first time in more than a week, which is good news for fishermen and the bay. The waters of the lower Susquehanna and the very upper portions of the bay will have stained water for a while, as well as floating debris, but will clear up in time. Presently the lower Susquehanna River is loaded with white perch. Now that the river has calmed down, there is excellent fishing to be found. There are still a few hickory shad being caught and released at the mouth of Deer Creek, but there is a lot of white perch eager to take shad darts. Lower flows in the river will also mean better fishing for flathead and channel catfish, and there could very well still be some American shad near the dam pool. 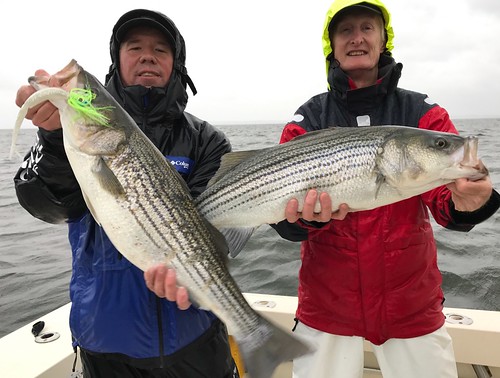 The Chesapeake Bay striped bass regulations changed on May 16 to allow bay fishermen to keep two striped bass between 20-28 inches, or one fish above 28 inches and one below. This is a welcome change for those weary of trolling back and forth across the channels in hope of hooking up with a striped bass over 35″ inches in length. The upper boundary line has moved a bit farther up the bay from the Brewerton Channel to a line drawn across the bay from the southern tip of Hart-Miller Island to the end of Route 21 in Tolchester. This will be a relief to those wishing to jig or troll for smaller fish that they can take home. Chumming and chunking will also be a good option this week. There have been exciting reports of striped bass in the Swan Point area as well as the Triple Buoys, Love Point, Podickory Point and the Bay Bridge piers.

There are encouraging reports of 20-28-inch striped bass at a number of locations in the middle bay region. There have been good reports of jigging action at the Hill area that up until May 16 has been catch-and-release only. Metal jigs and soft plastic jigs are the ticket; some are using 9-inch soft plastic jigs and finding a few trophy class fish. Other locations that are holding a lot of fish are the channel edge off Kent Island and the 35-foot channel edge near Parkers Creek to the power plant on the western side of the shipping channel.

Captains who continue to troll will be adding smaller lures in their trolling spreads this week and will be able to target and keep fish smaller than 35 inches, which will make everyone happier. As most will attest, the spring trophy striped bass season has been a bit disappointing. The weather was certainly not on our side and everyone is still trying to figure out how our post-spawn striped bass slipped through the fleet of boats pulling planer boards with as many as 40 lines on the larger charter boats. At this point, it is hard to say what sneaky shenanigans the spawning striped bass played on us. One thing is a fact, surface water temperatures had dropped from above 60°F to 55°F by the weekend. Warmer weather this week and plenty of sunshine should get our bay water temperatures back to a more favorable level. 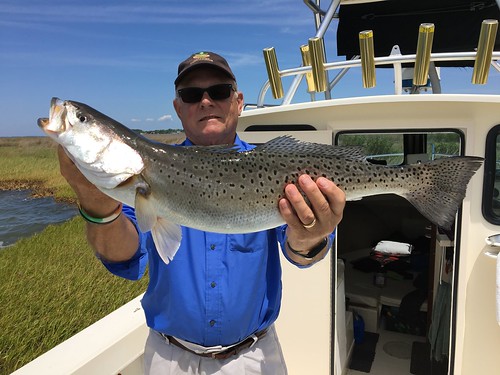 William Rohrer Sr. is sure happy with this big speckled trout he caught recently in the Tangier Sound area. Photo courtesy of Ken Zborowski.

The lower bay region offers good fishing for striped bass under the 35-inch mark this week. Locals will be happy to divert their attention from trophy sized fish or the lack thereof to something more accommodating to their efforts. Large trophy sized striped bass are still being caught along some of the traditional steep channel edges along the shipping channel and in the lower Potomac River. There are also a lot of striped bass in the 20-30 inch range in the region; they tend to be congregated near the Cove Point to Cedar Point area.

Recent continued late-night enforcement at Fishing Creek Bridge in Dorchester County by the Maryland Natural Resources Police resulted in nine men being charged with illegal fishing and 154 undersized striped bass being seized. Officers also charged four men with fishing in a prohibited area, keeping too many striped bass and keeping undersized fish. Fifty-six striped bass were seized. The men are scheduled to appear in Dorchester County District Court. Each charge carries a maximum fine of $1,500. Many thanks to the officers who are out patrolling along the bay during some very late hours.

On the bright side, the lower Eastern Shore fishing scene has seen some wonderful speckled trout catches in the past week along the lower Eastern Shore marshes. Targeting guts and tidal creeks where they empty out into the bay on an ebbing tide has always been the place to be, and once again, those stinky old white Gulp mullet baits tend to be the best lure to use. Flounder are showing up in the Tangier Sound area, and an old buddy from the 1960s, northern blowfish, are being caught by those bottom fishing. Cow-nosed rays are moving into the region and spreading to the north in waves just in time for the opening of areas where shallow water fishing for striped bass is a passion for many.

Fishing for white perch has been very good in most of our tidal rivers and creeks this week. The perch have arrived at their summer haunts and are ready for fishermen. Fishing with ultra-light tackle and casting to shoreline structure in the evenings is a wonderful way to pass some time. Structures such as fallen trees, logs, riprap and current beaks are good places to cast small spinners, spinnerbaits or plastic jigs. In deeper waters, near docks, a shad dart tipped with a grass shrimp is hard to beat when jigged close to the bottom and under the dock. 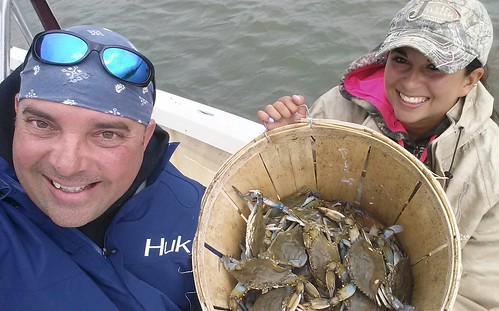 Rich Watts and his daughter had a hankering for some fresh crabs and set out collapsible crab traps in a middle bay region tidal creek. Photo courtesy of Rich Watts.

The weather on Thursday through Saturday was not very inviting to fishermen or recreational crabbers. Crabbing is picking up speed and although water temperatures took a dip this past week, crabbing in the shallower creeks offered some rewards.

To kick off the freshwater/inland section, I want to mention the new Maryland state record muskellunge. Tessa Cosens used a black spinner to catch the 32.5-pound fish in the Upper Potomac River, below Dam #5.

Fishing for walleye continues to be good at Deep Creek Lake along rocky drop-offs and deep grass edges. Drifting minnows has been a favorite way to fish for them. Anglers are also catching a mixed bag of smallmouth bass, rainbow trout and large yellow perch. Largemouth bass are moving into the cove areas and other shallow areas in preparation for spawning and males are starting to carve out nests. Northern pike can be found in the deeper parts of the coves and chain pickerel in the shallower grass. Miles Spicer was fishing on the upper Anacostia River when he caught this snakehead. Photo courtesy of Bruce Wernek.

Largemouth bass in many areas of the state are beginning to shift towards a summer mode of behavior, but with water temperatures relatively cool, they can be found most of the day near grass and similar structure. Whacky rigged stick worms have been working well in the grass and topwater lures in the shallows. In many of the state’s tidal rivers and creeks, northern snakeheads are becoming more of a shallow water target for those who wish to help cull their population and take home something to eat. The lower Eastern Shore tidal rivers and creeks have an expanding population and the tidal Potomac area has had a lot of northern snakehead for several years.

Fishing for crappie remains good this week near structure such as fallen tree tops, brush and grass. Bluegills can provide plenty of fun fishing, especially for the young crowd equipped with a simple bobber and worm rig. There are children’s fishing rodeos almost every weekend this time of the year and they provide fun fishing for out little angler’s with a bit of competition thrown in. What kid doesn’t like to win a trophy? To find a fishing rodeo near you, check out the rodeo schedule.

There are plenty of blue catfish in the tidal Potomac River waiting to jump into someone’s ice chest for a trip to the filleting table and freezer. Cut bait such as fresh white perch or gizzard shad and a bottom rig is all that is needed. 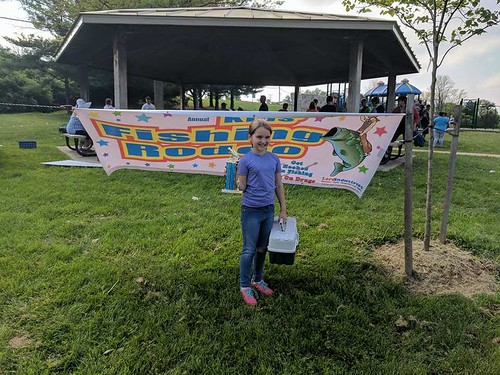 Amelia Hatmaker seems to have had a great time fishing and came home with a trophy, a tackle box and bragging rights. Photo courtesy of Michael Hatmaker.

The weather has finally started to smile on the Ocean City area this week and the fishing continues to be great for large bluefish in the surf, the inlet Route 50 Bridge area and the back bay channels. These bluefish are real choppers and although skinny, provide some fun fishing. They are being caught in the surf on cut bait rigs and a few striped bass are also being caught. Those fishing with baits such as squid and peeler crab are catching black drum and blowfish.

Casting Got-Cha plugs or drifting cut bait at the inlet will also get one into large bluefish. There are flounder being caught in the back bay channels such as the Thorofare on white Gulp baits and the traditional squid and or minnow bottom rigs. There are short striped bass to be found in the Route 90 Bridge area and they are providing some fun catch and release fishing.