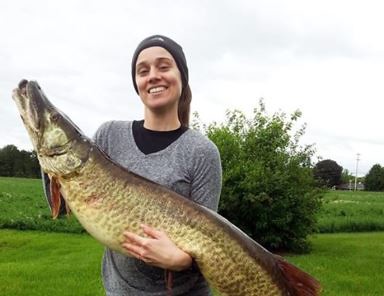 Tessa Cosens, 26, caught a muskie recorded at 32.5 pounds May 6 along the banks of the upper Potomac River in Washington County.

The record fish was 49 inches long with a 24-inch girth.

A relative newcomer to muskie fishing, Cosens – who is several months pregnant and had been feeling under the weather – was fishing along the riverbank using a 7-foot muskie rod and double-spinner. She snagged her record catch after a 15-minute struggle.

“All the guys around me stopped fishing and looked at me,” Cosens said. “There is no other fish that fights like a muskie.” 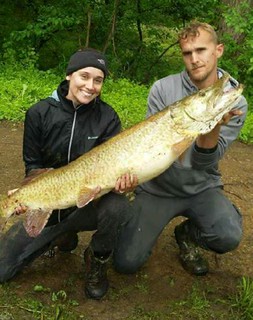 Muskie’s are one of the largest freshwater fish in the state. Cosens’ catch broke the previous Maryland record of 31.75 pounds, set by Kenneth Files in 2011.

To help determine the age of the fish, Cosens is donating a sample of the muskie’s scales and cleithrum – a large bone above the gills – to the department for further analysis.