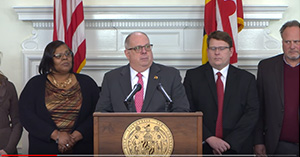 On January 5, 2018 Governor Larry Hogan announced a series of legislative proposals and an executive action to further protect, support, and empower victims of crime in Maryland. The governor’s initiatives include proposals to combat human trafficking and repeat sexual predators, as well as to aid in the restitution process and protect domestic violence victims’ personal information.

ANNAPOLIS, MD – Governor Larry Hogan today joined Senate President Thomas V. “Mike” Miller and Speaker of the House Mike Busch to sign the Rape Survivor Family Protection Act into law. This new law, passed with the governor’s vocal support after nearly a decade of efforts by advocates, will enable rape victims who conceive a child to terminate the parental rights of their rapist. At the outset of the 2018 session of the Maryland General Assembly, the presiding officers stated their support for this legislation, while the governor called on legislators to act expeditiously and pledged to sign it the moment it reached his desk. Read more…

Below are some agency resources you may find useful:

We're available on the following channels.