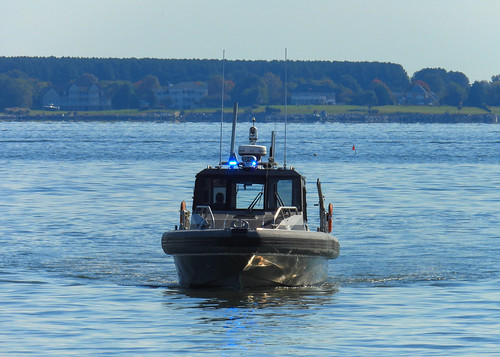 A commercial inspection of a Worcester County aquaculture company in July resulted in multiple citations. During an inspection of Johnson Bay Oyster Company, an aquaculture lease company in Girdletree, officers reported several violations and charged the owner, Charles Coleman, with more than 30 citations. Charges included vessel equipment violations, aquaculture marking violations, failing to attach state-issued tags to oyster containers before leaving the site, operating outside of designated lease coordinates, failing to implement a vibrio control plan, and other violations. On September 30, Coleman pled guilty to failing to tag oysters harvested from a lease area, failure to implement a vibrio control plan, and four counts of failure to comply with the National Shellfish Sanitation Program Model Ordinance. He faces up to $6,000 in fines.

A fishing citation led to police arresting a Washington, D.C. man for an active warrant. Officers were conducting a patrol check of Rock Point in Charles County on August 11. While there, they observed Ermen Gomez, 26, fishing and possessing an undersized striped bass. In response, police wrote Gomez a fishing citation. During their investigation, they also learned that Gomez had an active NRP warrant for failing to appear. Police immediately took Gomez into custody. He is scheduled to appear in court at a later date.

Police charged a man for illegally harvesting blue crabs in Dundalk, Baltimore County. On Aug. 24, Officers were on patrol at Peach Orchard Park along Bear Creek when they observed Jose M. Lemus Portillo, 39, crabbing along the shoreline. Portillo and a juvenile were wading through knee-high water and shining a flashlight to attempt to locate crabs. According to police, Portillo harvested about a half-dozen crabs by scooping them out of the water with a large landing net and returning to shore to place each crab into an orange bucket. As the two were packing, police inspected and found 21 female crabs and nine undersized male crabs, a female peeler, and 13 legal-size male hard crabs. Portillo admitted to harvesting all of the crabs. He was charged with multiple violations including possession of female crabs (which is not allowed for recreational crabbers); possessing more than 20 crabs per bushel, possessing undersized crabs, and recreational crabbing on a Wednesday. He faces up to $575 in fines and is scheduled to appear in court later. The crabs were seized and returned to the water.

Police charged a Pennsylvania man with failing to report a deer harvest. Officers were on patrol August 30 when they followed up on 2021-2022 season Deer Management Permits. They discovered that a hunter, Peter Durgin, checked in two antlered deer on a permit that allows only antlerless deer. Durgin, 35, admitted to shooting the two antlered deer last year. Police also allege that Durgin shot two fawns this year on the current 2022-2023 permit. Durgin told police that he did not check the fawns in as required and did not take possession of the deer or meat. As a result, police charged Durgin with failing to report a deer kill within 24 hours. He was also issued a citation for the antlered whitetail harvested in 2021. If convicted, he faces up to $750 in fines.

A Fallston man was charged with operating a personal watercraft while intoxicated and speeding on Middle River in Baltimore County. Officers on boat patrol September 17 observed a vessel leaving Frog Mortar Creek exceeding the 6-knot speed limit heading towards the mouth of Middle River. Police say they attempted to conduct a vessel stop, but the operator continued traveling at an excessive speed. Officers continued to follow at a safe pace until the operator finally stopped the vessel at Muddy Gut on Back River. Police ordered the boat operator, Kevin O’Brien, 39, to shut his boat off and put his hands in the air. During their investigation, police noted that O’Brien had glassy eyes and an odor of an alcoholic beverage. O’Brien told officers he had two alcoholic drinks. O’Brien also had trouble producing equipment requested during the officer’s safety inspection. Officers wanted to conduct a field sobriety test but O’Brien refused and stated that he “isn’t that drunk.” Police charged O’Brien with multiple citations. He was scheduled to appear in court at a later date where he faces up to $3,000 in fines and 28 months in jail.

An Allegany man was charged with hunting without permission on private property. On September 19, officers received a tip that Matthew Fann, 20, was trespassing on private property in Flintstone and had harvested an antlered deer. Fann later admitted that he sought written permission to hunt on the property, but that the owner denied authorization. He initially stated that he was hunting alone, but later recanted that statement and admitted that he was hunting with a friend. Police also that Fann misreported the location of two antlerless deer he had killed, falsely stating the harvests were at South Mountain State Park in an attempt to conceal his exceeding the deer bag limits of Region A. Police issued Fann one criminal citation for trespassing, and citations for hunting without written permission, exceeding the Region A bag limit for antlerless deer during bow season, and false statements when reporting the harvest of any deer. He was given three additional warnings for false statements when reporting deer harvests. Fann faces up to $4,500 in fines.

Officers charged a Callaway man with harvesting oysters without a license. On Oct. 7, Officers were conducting surveillance near the Wicomico River and observed William Hobbs, 34, on a boat using hand tongs to harvest wild oysters. When Hobbs came back to shore, he attempted to hide his face from officers. However, officers still approached him and during a conservation check check learned that Hobbs’ license to harvest wild oysters had expired. According to police, Hobbs admitted he did not currently have a license and was charged for that and for failing to pay the state’s oyster surcharge. He faces up to $26,000 in fines and a year in jail. He is scheduled to appear in court at a later date.

Maryland Natural Resources Police Officers charged an Anne Arundel County man with hunting violations In the Brooklyn area of Baltimore City. On Oct. 18, officers responded to a wooded area after hearing that a man was dragging a deer from a “no hunting” zone. Officers identified the man as Gordon Hall III. According to officers, Hall did not possess the required hunting stamps nor permission to hunt in that area. He harvested an 8-point buck on Sept. 24 and at time of harvest did not possess the required bow stamp. As a result, police charged him with 12 hunting citations including hunting without permission, failing to report a deer, and failure to report a deer kill. If found guilty on all charges he could face a maximum $18,000 in fines.

Police charged a Thurmont man with illegal possession of a weapon in Frederick County. On Oct. 24, officers on patrol in Wigville Road for the first day of black bear season observed man hunting, identified as Steven Grimes, 47. During the compliance check, police located a rifle in Grimes’ possession. However, during their investigation, officers learned that he was prohibited from possessing a firearm due to criminal convictions on his record. As a result, police confiscated his weapon and charged him with illegal possession of ammunition and a firearm. Grimes is scheduled to appear in court at a later date.

Police charged a Frederick man for poaching on private property on Oct. 30. Officers were on patrol in the area of a Frederick County retirement community after receiving a complaint that there was a man hunting on the property without permission. Police found a man wearing camouflage and holding a crossbow, and identified him as Tyler Murphy, 26. He told police that he was trying to find a deer he shot elsewhere, where he had permission, and intended to get permission for this location afterward. Murphy also claimed he had only one bolt with him that he had used to hunt the deer. During this conversation, police noticed that Murphy’s pants had insulation falling out of a tear in his clothing. While on the property, police found a natural blind containing tufts of clothing insulation similar to Murphy’s; a deceased, antlered whitetail deer; and two crossbow bolts with orange fletches, matching Murphy’s. When confronted with this information, Police say Murphy admitted that he shot the deer while on the retirement community’s property and cited him hunting without permission. The deer was donated to a family in need. NRP reminds all hunters that Maryland regulations require written permission to hunt on private property.

A Princess Anne man was charged with oyster violations and other charges. Officers were patrolling in the Wicomico River on Nov. 4 when they observed someone operating an unmarked Jon boat with commercial oyster gear and a basket of oysters on board. Two occupants, one identified as Michael Oney, 30, were on the vessel. Police conducted a commercial inspection and located eleven and a half bushels of oysters, seven and half of those were not tagged as required by Maryland law. Oney admitted that the bushel was his. Police also discovered marijuana on the vessel, which also belonged to Oney. Afterward, Oney was charged with exceeding the catch limit for power dredge by one bushel, failure to affix a tag to oyster bushel before leaving the oyster bar two bushels, and possession of marijuana. Police returned the oysters to the water. He faces up to $2,100 in fines.

Several Anne Arundel and Montgomery County residents were charged with trespassing and striped bass violations in Talbot County. Officers were on patrol on Nov. 5  when they observed multiple individuals fishing on the south side of the Knapps Narrows drawbridge on Tilghman Island, which is clearly marked with a “no trespassing” sign. During their inspection, police located four undersized striped bass. Three of the eight individuals admitted to catching the four striped bass. Additionally, all of the subjects were using a rod and reel to attempt to catch fish. Each of these individuals were charged with exceeding the striped bass size limit, a $100 fine, and trespassing on posted property: Juan Carlos Castillo Gonzalez, 42, of Montgomery Village; Angel Gomez Castillo Gomez, 20, of Lothian; Angel Adalberto Castillo Gonzalez, 44, of Lothian (charged with two fish violations, for an additional $125 fine). Additionally charged just with trespassing are: Jose Rodolfo Rivera Cortez, 46, of Rockville; Nolvia Ramirez, 24, of Rockville; and Irvin Alexander Roque Gomez, 24, of Lothian. For the trespassing charges, all must appear in court.

Police cited a Carroll County man for shooting a white-tailed deer with a firearm during archery season. Officers received a call Nov. 8 of shots fired in a residential area in Keymar. The caller informed officers that in addition to hearing gunshots, he saw a vehicle parked on the road, and a man shining a flashlight onto his property. When police arrived, they located a trail of fresh deer blood and a deceased antlerless white-tailed deer with a .30 caliber hole in the ribcage area. Police identified a suspect as area resident Robert Beers Jr, 72, and interviewed him at his home. According to officers, Beers admitted to using a 30-30 rifle to shoot the deer and trying to track it. He also admitted that he knew it was archery season and it was not legal to use a firearm to shoot the deer. He faces up to $1,500 in fines.

Maryland Natural Resources Police charged a Pasadena man for illegally baiting and hunting on the Eastern Shore. Police were conducting surveillance Nov. 26 at a baited area with a tree stand in Chesapeake Forest Lands in Dorchester County when they observed Ronald Melvin, 76, sitting in the stand. According to police, Melvin admitted that the stand was his and that he placed the bait. As a result, officers charged him with failing to remove a tree stand, placing bait, and hunting with the aid of bait on Chesapeake Forest Lands. Melvin faces up to $1,500 in fines if convicted.