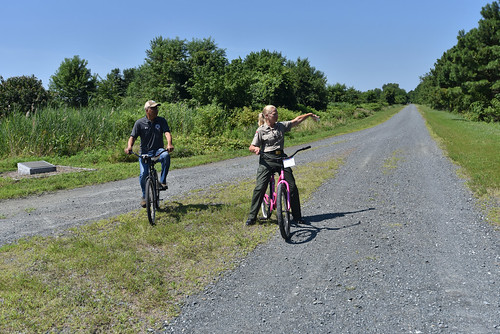 In late 2018, I read a newspaper article where Virignia’s then-governor, Terry McAuliffe, stated that his goal was to visit every park in his Commonwealth during his tenure as governor. I never found out if he actually completed his mission, but the idea caught my attention.

I was already planning to participate in Maryland State Parks’ annual “First Day Hike” on New Year’s Day 2019. That hike would eventually serve as the launch of my State Park Bucket List campaign, in which I officially set my own goal to visit every property managed by the Maryland Park Service during my four remaining years in office. My hope was to use this effort to open Marylanders’ eyes to the natural beauty of our state, and encourage everyone to lace up their boots and get outside to enjoy what our public lands have to offer.

The Bucket List campaign became very popular with our staff and the State Troopers from Executive Protection who would travel with me. The visits would not have been as enjoyable, and definitely not as informative, without the knowledge and hospitality of the park rangers and staff of the Maryland Park Service. I met many wonderful, dedicated, and knowledgeable stewards of state parks during this journey, and I thank them all for their service to our state.

I also owe a debt of gratitude to Maryland Department of Natural Resources Secretary Jeannie Haddaway-Ricco and her team for working with my staff to schedule the visits and participate in all but a few outings. I am also thankful to the Natural Resources Police.

Here is a glimpse into my personal State Park Bucket List journal, with four entries that represent each section of the state: Central, Eastern, Southern, and Western.
I look forward to releasing my entire journal to the public before the end of the administration.

Central: Hart-Miller Island State Park
July 11, 2022
Hart-Miller Island State Park is located on an 1,100-acre island in Baltimore County on the Chesapeake Bay near the mouth of Middle River. Our visit to Hart-Miller Island included a bus tour of the South Cell section of the park, where we observed a variety of bird species, including ducks, ospreys, and several bald eagles (at least five). We were told that deer and at least one family of red foxes call the island home. We had perfect weather for our visit. We met two women who kayaked from the shoreline to the island, and then mounted the park’s free bicycles for a ride on the 3-mile loop around the South Cell. I took a short bike ride to observe the plaque dedicated to community members who worked with the state on the island’s restoration.

The rangers told us that the island is a favorite for boaters who anchor in the shallow waters and wade to shore for fun in the sun on the weekends.

The island was once part of a peninsula extending into the Bay from Edgemere, Maryland. Over the years, it was eaten away by erosion. The Maryland Port Authority purchased the island in 1978 as a potential site for sediment dredged from the Baltimore shipping channel.

Starting in the early 1980s, the perimeter of the island was stabilized with stone and sandy beach areas. The island was rebuilt with the placement of channel sediment. To ease the rebuilding, the island was divided into sections: the 290-acre South Cell and the 790-acre North Cell. The “South Cell Environmental Restoration Project” was completed in 2005. The last sediment deposits were made in 2009. The North Cell remains under final construction and is not yet open to the public. 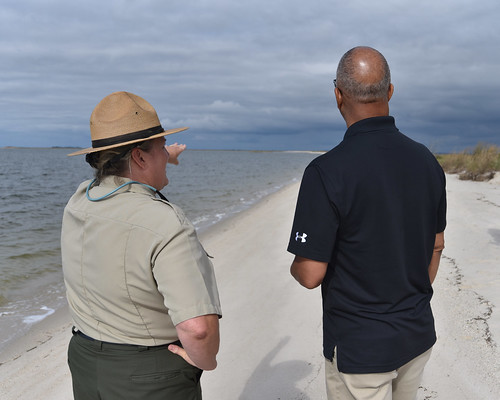 Eastern Maryland: Janes Island State Park
October 13, 2021
On a beautiful October day, I visited Janes Island State Park, a short distance from Crisfield in Somerset County. It’s probably one of the best times of the year to visit, but the DNR website warns visitors of mosquitoes, ticks, and “BITING FLIES” (emphasis added).

During my visit there were no signs of mosquitoes, ticks, and thank heavens—no biting flies. Instead, we were able to enjoy miles of a beautiful vacant white sand beach along Tangier Sound on the island (Janes Island) portion of the park. The beachfront runs for 13 miles along an isolated island, which includes over 2,900 miles of saltmarsh with over 30 miles of water trails. We were the only individuals we saw on the island. The island can be accessed via motorized boats, canoe, and kayak. I understand it probably takes about 45 minute to paddle a kayak to the island. We took a motorboat. (I know, “slackers”).

The park’s mainland, which is a total of 290 acres, offers a variety of cabins as well as over 100 camp sites; 49 are equipped with electrical hookups to accommodate tent or vehicle campers. There is also a well-stocked park store for campers. Many visitors to the park enjoy the fishing, crabbing, and waterfowl hunting. For day-use visitors, there are multiple picnic areas, pavilions, a boat ramp, and a marina. 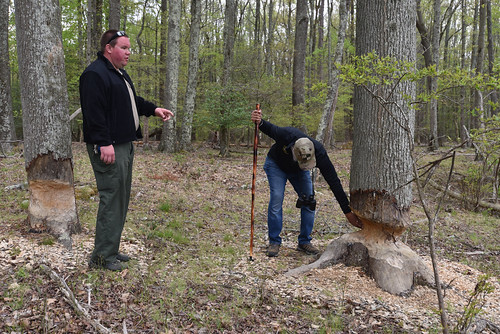 Southern: Mattawoman Natural Environmental Area
April 21, 2022
Mattawoman Natural Environmental Area is 1,727 acres of protected land in Charles County near Indian Head. Nearly 93 percent of the property is designated as state wildlands, and has been named an Important Bird Area by the Audubon Society. The property has neither roads nor parking lots. On our visit, we parked along Route 224 and walked to the bank of Mattawoman Creek. We were led by Lynne Wheeler and Bob Lukinic from the local chapter of the Audubon Society.

Lynne brought along field glasses for us to find some of the rare bird species. We were fortunate to see a red-headed woodpecker. As its name implies, its head is completely red, like Woody Woodpecker. I would have never seen it if not for the trained eyes of our guides. We spotted several bald eagles as we were leaving the area (we didn’t need assistance in pointing them out).

Lynne and Bob told us there had been a long struggle to protect the property from development. The property is lowlands and was still very muddy in spots, several days after the last rain. Drainage would have been a major problem for any development should it have gone through.

The DNR suggests kayaking or canoeing from Mattingly Park in Indian Head upstream on Mattawoman Creek to enjoy the wetlands and submerged aquatic vegetation. As a feeding area for a number of fish species, the area is attractive to fishermen as well as fish-eating birds.

We were amazed to see the work of beavers on a couple of trees near the creek. They chewed the wood so smooth, as if they used sandpaper. 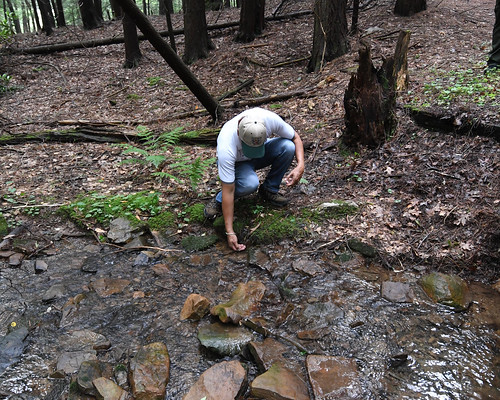 On our trip, we explored a couple of its 10 miles of trails through the beautiful, wooded area. As with all the parks I’ve visited, the rangers are very knowledgeable of the wildlife and various plant species within the park and the neighboring Savage River State Forest. Being that we made several stops on this Western Maryland visit, I was able to take advantage of one of the 12 fully furnished cabins for the night. I had a great night’s sleep with the cool mountain air and it was great to wake up to the beautiful summer morning. With a nice bed, stove, refrigerator, microwave, and a bathroom with hot and cold water, it isn’t quite roughing it like tent camping—but still fairly rustic. One thing to keep in mind is there’s no cellular phone service or internet within the park. That is a good and bad feature, depending on your desires.

For those who want to visit, the park includes a 13-acre manmade lake, which is perfect for summertime fun, including swimming, kayaking, or canoeing. The rangers put on programs throughout the year on various outdoor subjects including campfire cooking, fire starting, nature hikes, and of course, camping in bear country (yes there are bears here). Winter activities include cross-country skiing and snowshoeing.

Boyd K. Rutherford is the ninth Lieutenant Governor of the State of Maryland.