A Hunter’s Story: A Hard Lesson in Tree Stand Safety

I was bleeding from my head and lying on the ground under my tree stand, unsure how I got there. Somehow, in my state of confusion, I fumbled for my phone and managed to tell my neighbor that I’d fallen from my stand. He found me on my back on top of my fallen aluminum ladder, blood drippi ng to the ground.

I recall only a few scattered snippets of the next three or four hours, with no recollection of an ambulance ride to the emergency room and numerous CT-scans being taken of my entire body.

Following my 20-foot fall, I had a concussion and was possibly knocked unconscious. I remember the crunch of each stainless-steel staple to close the long gash across the back of my head–13 in total.

When all the damage was assessed, I also had a broken rib, a strained rotator cuff making me unable to lift one arm, and large areas of my back and arms had severe bruising. I had debilitating headaches. New “floaters” appeared in my eyes, blurring my vision as though I was looking through dirty glasses. A torn retina later required laser surgery.

Most frighteningly, a small bone extension on one vertebra of my spine, called a transverse process, was broken. I had been within an inch of landing directly on my spine, and likely breaking my back and being paralyzed.

According to the National Electronic Injury Surveillance System, in 2020 there were an estimated 3,472 tree-stand-related injuries that were treated in hospital emergency rooms. Those numbers have declined from a decade ago, but still are more than twice the number of hunting injuries caused by a firearm.

A third of those falls led to a fracture. Less common but devastating injuries include damage to the spinal cord, brain, and internal organs. On rare occasions, the hunter does not survive a fall from a tree stand. No doubt many more hunters fall but are very luckily not injured seriously enough to visit the hospital. 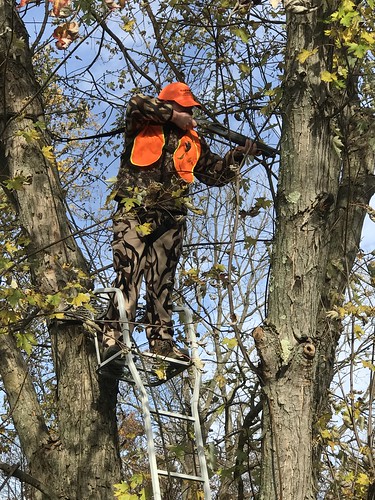 A couple of weeks after my injury, I had recovered enough to return to the site and assess the event. On the day of the accident, I had inspected my ladder and tree stand from the ground, and upon returning noticed the bottom of the ladder had slipped away from the tree a bit, meaning the top of the ladder leaning on a horizontal branch had slipped downward. I adjusted the ladder feet and had assumed it was safe because the previous year I had tied the top rung of the ladder to the tree trunk above the branch. I was wearing my safety harness but, for this first climb of the season, had been unable to attach my safety line to the tree branch until I was up there. The rest of the season I would have been able to attach my harness to the safety line for both ascents and descents.

Most falls occur when climbing up to or down from the tree stand. I recalled climbing the ladder and starting to maneuver into my tree stand by leaning forward into it, with my feet still on the ladder. I surmised that the ladder feet slid further back and the top of the ladder slipped below the supporting horizontal branch, broke the rope tying it to the tree, and fell forward to the ground. With my feet still below the branch and now swinging forward with the falling ladder, my body must have rotated backwards.

Hence, I landed on my back on the ladder, which probably mitigated my hard landing. Had I hit the rocky ground directly, I doubt I would be here to tell the story.
After about six weeks I had largely recovered–I had two months of physical therapy to improve my balance. It remains a tiny bit off.

I will continue to deer hunt in the years ahead, but I’ll be making some changes. First, I’ll buy a good strong commercial metal tree stand–no more “do it yourself” efforts. And it will be much lower to the ground.

Some other lessons learned:
Always tell someone where you are going and when you will be back–which I hadn’t done the day of my accident.
Always wear the safety harness and use a certified safety line.
Always take a mobile phone.

I am a professional wildlife biologist and a safety-conscious, experienced deer hunter. Nonetheless, I became an example of just how rapidly things can go very wrong, and I am grateful to be alive.

A life-altering injury can happen to anyone. Don’t let it happen to you.

Doug Inkley is a retired Senior Scientist with the National Wildlife Federation and member of the Washington County Forestry Board.