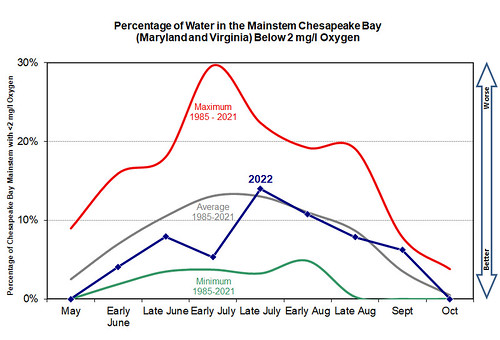 Water monitoring data collected by the Maryland Department of Natural Resources (DNR) and Old Dominion University show that dissolved oxygen conditions in the Chesapeake Bay mainstem of Maryland and Virginia were better than average for May-October 2022.

Dissolved oxygen was better than average in May through early July, followed by near average conditions in late July through August. Hypoxia lingered into September with worse than average conditions of 0.77 cubic miles observed versus a September historical average of 0.44. No hypoxia was observed in October, but weather conditions and research vessel availability prohibited Maryland from monitoring a number of lower Maryland bay stations and pushed Virginia’s monitoring toward the end of the month when no hypoxia would be expected. 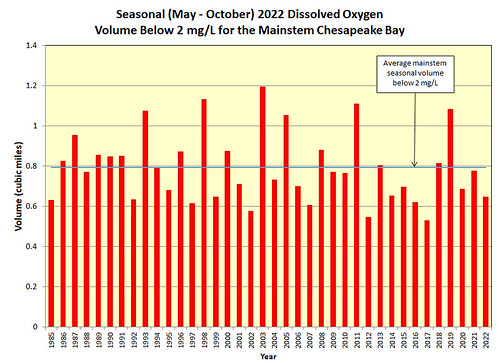 Seasonal hypoxia in the Chesapeake Bay mainstem can generally be forecasted based on freshwater flow into the Bay from January through May. Freshwater flow is an indicator of how much nutrient (nitrogen and phosphorus) runoff may be entering the Bay. However, conditions such as wind, temperature, and precipitation, can provide some influence over the variability of observed hypoxic volumes. Chesapeake Bay freshwater inflows, as estimated by the U.S. Geological Survey (USGS), were lower than average and near the historical lowest 25th percentile June through August. Coupled with already reduced average flows for January through May, these conditions may have helped support near to better than average conditions for most of the summer.

The National Oceanic and Atmospheric Administration’s National Centers for Environmental Information reported that Maryland monthly average air temperatures were above average from May through September 2022, and winds were near average. Warmer air leads to warmer Bay waters, which in turn hold less oxygen and support higher rates of oxygen consumption by microorganisms. These higher temperatures and lack of major wind events that aid mixing of oxygen into deeper waters, could have mitigated even better dissolved oxygen conditions.

In September, flows increased to near the highest 75th historical percentile. While these flows may not have immediately fueled more hypoxia, the lighter incoming freshwater on top of denser saltwater could have enhanced and maintained water column stratification, preventing oxygen from mixing into deeper waters, resulting in the above average hypoxia volume lingering into September. Winds from the remnants of Hurricane Ian in early October likely dissipated any remaining hypoxia in the Bay.

Maryland and Virginia combined results are presented for the mainstem Bay to be more comparable to the e yearly seasonal forecast by the U.S. Environmental Protection Agency’s Chesapeake Bay Program, USGS, University of Maryland Center for Environmental Science, and University of Michigan.

The 2022 forecast, released in late June, predicted Chesapeake Bay mainstem hypoxic volume to be 13% lower than the 37-year average due to reduced riverine nutrient loading from January through May 2022. The decreased amount of nutrients entering the Bay can be attributed to lower than average spring precipitation, as well as nutrient management efforts. Maryland and Virginia’s 2022 monitoring results closely matched the forecast of better-than-average conditions. The monitoring and seasonal forecast results also closely matched the better-than-average conditions predicted from computer modeling conducted at the Virginia Institute of Marine Science.

Crabs, fish, oysters, and other creatures in the Chesapeake Bay require oxygen to survive. Scientists and natural resource managers study the volume and duration of Bay hypoxia to determine possible impacts to bay life, and track improvements due to nutrient management efforts.