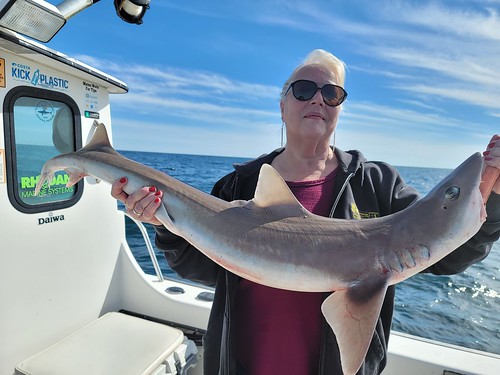 Fay Ganster of Reading, Pennsylvania has been officially recognized by the Maryland Department of Natural Resources (DNR) as the new state record holder for the Atlantic Division with an 18-pound smooth dogfish she caught off the coast of Ocean City on October 22.

Ganster, a frequent vacationer to Ocean City, booked a shark charter trip with her husband months in advance. However, the trip was canceled due to bad weather. At the last minute, Captain John Forman of the Bottom Bouncer fishing charter boat called to give them the green light.

After four to five hours fishing near the Isle of Wight shoal, Ganster pulled in a few bluefish and sea bass. Using a chunk of cut bluefish as bait, she cast again, hooking her record catch. Ganster said it took about 20 minutes to reel it in and “was a little bit of a battle.”

“I haven’t been shark fishing in about 12 years,” Ganster said. She added of her record catch, “This is really cool…this is a big deal.”

The fish’s weight was officially certified at Sunset Marina in Ocean City. A Maryland DNR biologist confirmed the catch.

The smooth dogfish (Mustelus canis) is a member of the shark family and generally swims in packs or schools. The smooth dogfish can be caught year-round and there are no daily creel limits for anglers or vessels