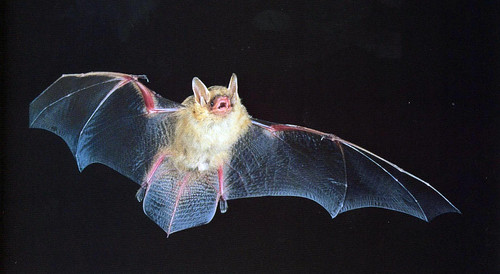 When people think of Halloween a few things may come to mind: pumpkins, ghosts, skeletons, candy, monsters, and of course, bats! As the only true flying mammals in existence, bats face a lot of misconceptions. You may have heard folks saying things like “blind as a bat” and mentioning that they could fly and get tangled in your hair. The truth is that bats can see out of their eyes but rely mostly on echolocation, a mechanism that works much like sonar. There are many species of bats around the world, and you may have heard of species like fruit bats, flying foxes, and even the spooky-sounding vampire bat.

The bats we have here in Maryland, as you can see in DNR’s Guide to Maryland Bats, are insectivores; a colony of bats can literally eat a ton of insects during the summer, as studies of guano have revealed. Bats are the primary predators of nocturnal insects and provide a vital role in our environment by controlling populations of insects that eat plants in gardens, crops, and forests.

The scariest fact about bats is that their populations have crashed in the U.S. from an invasive cold-loving fungus that will attack them in caves while they are hibernating. Millions of bats have been killed by white-nose syndrome since first reported in New York back in 2006, and it is considered one of the worst wildlife diseases in modern times (more info at www.whitenosesyndrome.org). 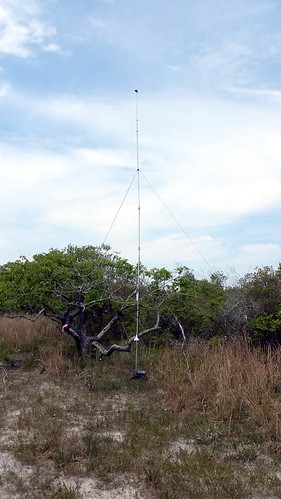 Stationary acoustic monitoring station at Assateague with bat detector and microphone that can receive and record echolocation calls which can be identified to species later. Photo by Ben Neece.

In Maryland we have two bats that are state-listed as endangered. One of them is Maryland’s smallest bat, the tricolored bat, which was formerly called the eastern pipistrelle. The other one is a native species called the little brown bat.

Maryland biologists have been monitoring winter populations with cave surveys for decades. More recently, biologists have been using bat detectors to acoustically monitor Maryland summer bat populations. Unfortunately, the picture is rather bleak with precipitous declines (some reaching 90% or more) noted in winter caves, mines, and tunnels in Western Maryland.

Luckily not all bat species numbers have declined. There are some bats that don’t enter caves for the winter. They will either migrate south, enter buildings, tree cavities, or snuggle in leaf litter on the forest floor. Red bats and big brown bats appear to be doing well in Maryland.

Biologists have been helping surviving populations of endangered bats by giving them places to roost and raise their young in the summer. Bat populations are slow to increase in number because many species only give birth to one pup and their mortality in the first winter can be high. Bats make up for this by living long lives. Banding studies have shown some little brown bats can live up to 30 years in the wild!

Next time you see a bat, remember, they eat pesky insects and don’t fly in your hair. If by some chance your home ended up with a bat as a visitor, this our Bats in Houses page will have helpful ways to handle the situation. Out of all the spooky things this Halloween, bats are our helpful friends!

With winter on the way, we turn to topics that inspire us in this spooky season of decreasing daylight. In this issue, I’m happy to share an introduction to glow-in-the-dark living creatures, a phenomenon that has always been one of my favorite marvels of the natural world. DNR’s resident bat expert, Dana Limpert, collaborates on a native animal feature about our favorite flying mammals. Plus, Outreach and Education Assistant Edwin Guevara describes some entertaining and educational outdoor activities for these dark evenings, and we suggest some Natural Areas to visit in this perfect season for hiking.