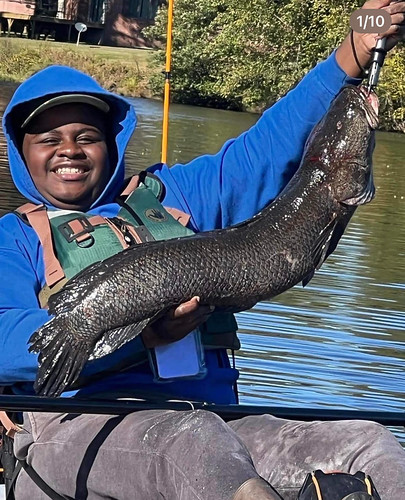 Anglers returned to fishing with some relatively warm and sunny weather following the previous week’s storm. Across the state, cooling water temperatures should cause both freshwater and saltwater fish to feed more aggressively prior to the winter months. Many boats are seeking striped bass on the Bay, fall trout stocking is underway, and the invasive Northern snakehead continues to provide action.

Chesapeake Bay surface water temperatures have dropped to the low 60s and should continue cooling all week. Maryland rivers are currently running in the mid 50s.

Due to the cooled waters and windy conditions this past week, turnover has occurred, and the Bay waters have mixed from surface to bottom resulting in good oxygen conditions and uniform water temperatures throughout the water column. This will result in fish being able move throughout the water column in many Bay areas as they feed on baitfish leaving the cooler rivers mouths.

Expect average flows for most Maryland rivers and streams. There will be above average tidal currents through Saturday due to the recent full moon on October 10.

Expect average water clarity for most Maryland portions of the Bay and rivers. However, expect poor water clarity from algal blooms in the Back and Bush rivers. To see the latest water clarity conditions, check Eyes on the Bay Satellite Maps on the Maryland Department of Natural Resources website.

Anglers at the Conowingo Dam pool and at the edges of the Susquehanna Flats were anticipating an improvement in striped bass fishing with the cooling water temperatures after Ian, but we have received very few reports from this area. The best tactics are casting poppers, crankbaits, and paddletails during the early morning hours. The mouths of the tidal rivers in the upper Bay should also provide striped bass action for those casting along shoreline structure, points, and the edges of grass beds.

Striped bass fishing in the upper Bay is often done by live-lining a mix of spot, eels, or white perch. However, with the cooling water temperatures, spot will soon be gone and many anglers will shift to jigging or trolling with artificial lures. Striped bass should still be holding in the Pooles Island area, the Tolchester Lumps, the mouth of the Patapsco River, Swan Point, and the Love Point rocks.

Jigging at the Love Point rocks and the Key Bridge should be a good option from now into November. After the recent storm passed and the weather cleared, striped bass were found feeding on small menhaden and bay anchovies under diving birds, and most of the bluefish have moved south down the Bay. The edges of the major channels are always a good place to look for schools of bay anchovies or small menhaden being swept by strong currents.

Trolling for striped bass is also becoming more viable as the water temperatures cool and fish are being found along channel edges. Umbrella rigs pulled behind inline weights with bucktails dressed with sassy shads or twistertails as trailers are popular.

White perch are schooling up over oyster beds in the tidal rivers and the Bay. Using bottom rigs baited with pieces of bloodworm or peeler crab is a good way to target them. There should still be some perch along shoreline structure this week and casting small lures is a fun light-tackle way to fish for them. However, keep in mind that if we continue to get cold air temperatures, the perch will be moving to deeper water. 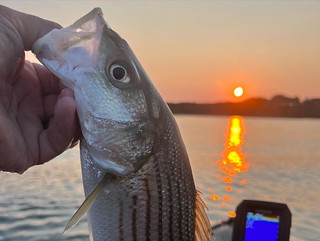 With the cooling waters, jigging close to the pier bases and casting to breaking striped bass should be productive. For this area, the best fishing success is in the morning and evening hours. At the shallow waters of the western side of the bridge, a mix of spot and white perch were being caught on pieces of bloodworm or peeler crab on bottom rigs, but these fish should start moving deeper in the next few weeks.

Striped bass should still be found along some of the channel edges in the middle Bay, and anglers will start to switch from live-lining to jigging. Trolling with umbrella rigs sent deep with inline weights is also a good option along channel edges, and anywhere a mix of striped bass and few lingering bluefish can be found working over schools of small menhaden and bay anchovies. The bluefish are now moving south with the cooling temperatures in the Bay.

Jigging for striped bass will really gain momentum during this month of “Rocktober” as cooler water temperatures push juvenile menhaden and bay anchovies out of the tidal rivers. The shallow water fishery for striped bass has been extremely popular. The Eastern Bay, Thomas Point, and the lower Choptank, Little Choptank, Severn, and West rivers all are good places to cast poppers, crankbaits and paddletails.

Water temperatures at Gooses Reef have now dropped to about 64 degrees, which should push most of the bluefish and Spanish mackerel out of the area. Jigging under breaking fish can result in legal-sized striped bass and maybe a few lingering stray red drum.

White perch are still an option in the region’s tidal rivers and creeks, and some of the best action will be the deeper waters where the perch are holding close to oyster bars. A few perch can still be found holding near docks, rock jetties, and shoreline structure in the mornings and evenings. A simple bottom rig baited with grass shrimp, pieces of bloodworm, or peeler crab will work well when fishing off docks near pilings. Casting small roadrunner type lures, jigs, and spinners work well along the shallower shoreline structure areas.

There are plenty of channel catfish in the region’s tidal rivers to entertain anglers; they are typically easy to catch on cut bait or chicken livers and provide plenty of action. Blue catfish can show up almost anywhere in the Bay and rivers, but the Choptank River seems to be a major hot spot for them. With the improved weather, targeting them this week should be good using fresh menhaden for bait and chumming to attract fish near the boat. 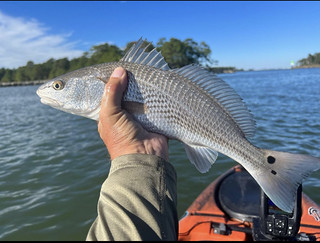 Anglers have not reported any lingering Spanish mackerel in the lower Bay after the storm and the cold snap, but there are still a few bluefish and small red drum being caught around Point Lookout.

With water temperatures at about 65 degrees at the mouth of the Potomac, lower bay anglers should be jigging close to the bottom, under the surface action of breaking fish striped bass and the occasional speckled trout or stray red drum. Jigging with large soft plastics or fishing with cut spot, menhaden, or soft crab are favored methods when schools can be spotted by slicks and pinpointed by depth finders.

The shorelines of the lower Bay, tidal rivers, creeks, and sounds are still holding a mix of striped bass, bluefish, speckled trout, and small red drum. Casting poppers, soft plastic shrimp, or paddletails under a popping cork or casting a variety of soft plastic jigs in the morning and evening hours is a fun light-tackle way to fish.

Recreational crabbers had been enjoying success in many tidal river waters of the middle and lower Bay. There should still be some heavy and extra-large crabs in the Bay and rivers in mid October, until the water gets too cold. The best crabs tend to be deep in waters 12 feet to 20 feet, and most of the sooks are headed down the Bay, so baits tend to last longer. 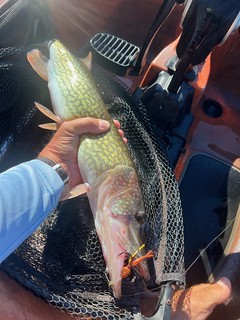 This 21.5-inch pickerel was caught in St Mary’s Lake. Photo by Eric Packard.

Inland water temperatures are declining steadily, and freshwater flow levels should be getting back to normal with dry and sunny conditions this week. All the freshwater species are beginning to transition to a fall fishery and should be feeding.

The upper Potomac River should have some fall smallmouth action. As grass beds diminish, the smallmouth bass are focusing on crayfish that are looking for a winter home in deeper waters. Small crankbaits and soft craw jigs that mimic crayfish are a good bet, as are tubes and spinnerbaits.

Largemouth bass should be spurred on by cooler water temperatures, but anglers may have to experiment with different lure colors in cloudy water left behind by rain and runoff. These fish are feeling the need to build up body stores and are more comfortable in cooler waters, so they are feeding longer into the daytime hours. In many tidal and non-tidal waters, grass beds are showing signs of declining due to cooler water and shorter daylight hours. Targeting existing grass or transition zones between deeper waters and the shallows should produce largemouth bass as they try to intercept baitfish and crayfish looking for cover in deeper waters. Spinnerbaits, lipless crankbaits, and wacky-rigged worms work well along the grass edges and sunken wood. There is still enough grass to target with frogs and buzzbaits and in the tidal areas, which will surely catch the attention of northern snakeheads. There are also some large pickerel starting to feed in the ponds and lakes.

Fall is a great time to target snakeheads in the tidal Potomac and Patuxent rivers, the lower Dorchester County tidal waters, and tidal rivers in the upper Bay. Fishing with large minnows under a bobber comes into its own this time of the year in the more open waters near sunken wood, shoreline brush, and grass edges.

Channel catfish are active in almost every tidal river in the Chesapeake Bay system, and they provide great action from your favorite shoreline spot or from a boat. Blue catfish can be found in great numbers in the tidal Potomac and Patuxent rivers, but there are growing populations in the Nanticoke, Choptank, and many other tidal rivers. 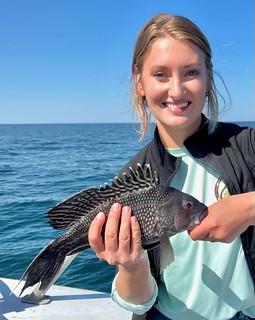 Surfcasters should still have a few shots at some large red drum moving along Maryland beaches, while soaking large baits of cut menhaden, spot, or mullet. The surf was not fishable during the recent storm, but before that a mix of kingfish, spot, and croaker were being caught in the surf on pieces of bloodworm, and bluefish were caught on cut spot or finger mullet. As the waters begin to cool, striped bass will start to move south from the New Jersey beaches, but it will take several strong cold fronts to really get them moving.

Flounder anglers in the back bays have reported some action after the storm passed and warmer sunny weather moved in. Most flounder reports are now from the party boats fishing on the wreck and reef sites offshore. A few tautog and sheepshead can be caught around the jetties on sand fleas and crabs. With the better weather, anglers headed out to the offshore wreck and reef sites and found good fishing for sea bass, flounder, and a few bluefish.

Out at the canyons, deep-dropping anglers have been catching tilefish and a few swordfish after the storm passed and weather conditions improved.

“Fishing provides that connection with the whole living world. It gives you the opportunity of being totally immersed, turning back into yourself in a good way; a form of meditation, some form of communion with levels of yourself that are deeper than the ordinary self.” – Ted Hughes

Maryland Fishing Report is written and compiled by Eric Zlokovitz, fisheries biologist with the Maryland Department of Natural Resources.