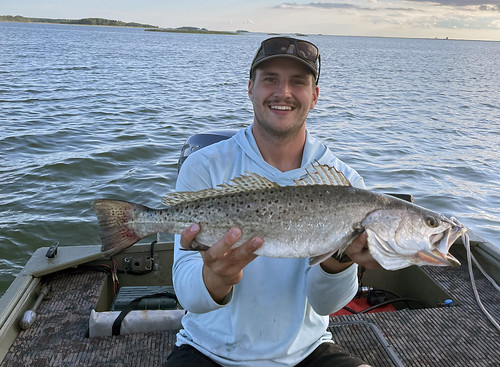 Cooler air temperatures will start lowering water temperatures this month and fish behavior will begin to change, for the better in most cases. Freshwater fish will become more active during the day, summer migrants to the Chesapeake and coastal bays will begin to feel the urge to move south, and fall migrations of offshore ocean species will begin.

Continued moderate weather is predicted all this week with daytime temperatures around 80 degrees. Expect winds of 10-15 knots all week with higher gusts on Wednesday, and a chance of rain or thunderstorms on Monday and Tuesday. Chesapeake Bay surface water temperatures has cooled to about 80 degrees. Maryland rivers are currently running in the mid to low 70s. If you are seeking areas with cooler waters, fish the surface early in the day, or fish deeper waters or upwind areas.

Expect average flows for most Maryland rivers and streams all week. There will be above average tidal currents all week due to the upcoming full moon September 10.

There will be average water clarity for most of the main Bay and rivers. To see the latest water clarity conditions, check Eyes on the Bay Satellite Maps on the Maryland Department of Natural Resources website. 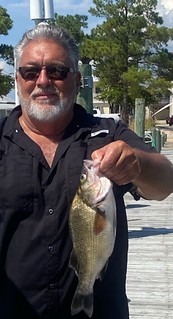 Catfish – flathead, channel, and blue –  continue to dominate the fishing scene at the Conowingo Dam pool and the lower Susquehanna River. Blue and channel catfish can be found in high numbers from the mouth of the Susquehanna River, to the Elk River, and down through the Bay and the tidal rivers that flow into it. The catfish can be caught on a variety of baits when fishing close to the bottom.

Striped bass fishing is centered around the area from Pooles Island south to the Love Point rocks this week. The various lumps southeast of Pooles Island, the bridge piers at the Key Bridge, and the Love Point Rocks are all productive places for live-lining spot, small white perch, and eels. Casting a mix of topwater lures, crankbaits, and paddletails along the shorelines of the Bay and lower sections of the tidal rivers during the early morning hours is a good way to catch striped bass. Visit the DNR website for responsible catch-and-release procedures and for tips on using circle hooks.

Breaking fish consisting of small striped bass and bluefish are being spotted in the upper Bay, and there are verified reports of Spanish mackerel as far north as the Patapsco River. Bay anchovies are on the menu for this mix of fish; to catch anglers can try trolling small gold Clark and Drone spoons behind. Troll at speeds of about 8-9 mph for Spanish mackerel and 5-6 mph for bluefish and striped bass.

White perch are offering plenty of action in the Bay on some of the hard-bottom knolls and in the lower sections of the tidal rivers. Bottom fishing with peeler crab or pieces of bloodworm works well when fishing deep. In the early morning hours and late evening, casting small spinners and roadrunner type spinnerbaits along shoreline structure areas is a fun and productive way to fish. 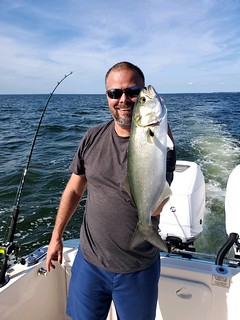 The Bay Bridge piers are attracting anglers that are drifting a variety of baits to the pier bases, with live spot or eels, cut spot, and peeler or soft crab as bait. The early morning hours on a good running tide provides the best chances of hooking up with a striped bass. Casting bucktails and skirted soft plastic jigs in the early morning hours at the bridge pier bases is another good way to fish for striped bass. The shallower ends of the bridge on the western side are also getting a lot of attention from anglers fishing for a mix of white perch and spot. Peeler crab works well for the white perch and pieces of bloodworm for the spot.

Casting a variety of lures during the early morning hours along the Bay and tidal river shorelines is a great way to catch striped bass this week. Locations with structure are always a draw for striped bass, the Poplar Island rocks, Thomas Point, and inside Eastern Bay are just a few examples. To help protect the undersized striped bass that are returned to the water, remember to visit the DNR website for responsible catch-and-release procedures and for tips on using circle hooks.

A mix of Spanish mackerel, bluefish and small striped bass are pushing schools of bay anchovies to the surface and slicing through them. This opportunity makes great fun for anglers who are trolling nearby or casting metal jigs or spoons into the mayhem. Super-fast retrieves are the ticket for Spanish mackerel, and slower retrieves will allow bluefish to catch up. At times jigging close to the bottom underneath the surface action may result in hooking up with a nice sized striped bass.

Trolling small gold Clark and Drone spoons behind planers at a good clip is the ticket for Spanish mackerel, and at slower speeds for bluefish. Spanish mackerel will travel where the food is; anglers and watermen are reporting them far up into some of the tidal rivers this week. Out in the Bay, the channel edge from Bloody Point south past Buoy 83 down to the False Channel is an excellent place to troll. As the season progresses, some of the bluefish are becoming larger.

Fishing for white perch is good this week in the lower sections of the region’s tidal rivers. Fishing with bottom rigs baited with peeler crab over oyster reefs is a good bet. Casting small lures along shorelines during the morning and evening hours is another fun way to fish for them. Docks and piers over some of the deeper waters should never be overlooked and bait should be fished close to the pilings.

There are plenty of channel catfish in the region’s tidal rivers and they are ready to take a variety of baits. Blue catfish are being found with more regularity in the tidal rivers; the lower Choptank River between Cambridge and the town of Choptank tends to hold the greatest numbers. 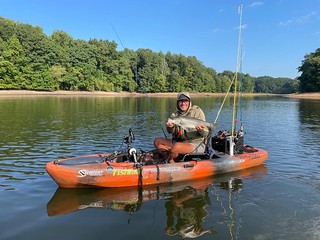 Trolling has been a popular way to fish for them with small gold Clark and Drone spoons being pulled behind planers at 8-9 mph. Slower speeds will catch bluefish. It pays to have a spinning rod rigged with a metal jig or spoon and be ready to cast into breaking fish when they are encountered. The major channel edges on the east and west sides of the Bay are some of the better places to find them.

Some of the best striped bass fishing this week is occurring during the morning and evening hours along the shores of the Bay, tidal rivers, and creeks. Casting a variety of topwater lures, crankbaits, and paddletails is a fun and productive way to fish for them. Anglers near Tangier Sound are also catching some impressive speckled trout, also known as spotted seatrout.

Schools of large red drum are entertaining anglers with some exciting catch-and-release opportunities. The best locations to find them are on the eastern side of the Bay from Buoy 76 south past the Target Ship and Mud Leads. Some are having good success by trolling with large spoons, crankbaits, and hose lures, while others are locating fish on their depth finders and jigging with large soft plastic jigs, or dropping soft crab baits on circle hooks to them. Anglers who are trolling large hoses are picking up cobia in the area from Buoy 72 south past the Target Ship.

As one would expect this late in the season; spot are larger and the fishing is excellent in Tangier Sound and in the lower Potomac and Patuxent rivers. Bloodworms tend to be the best bait to use on a bottom rig. White perch, croaker, and kingfish can also be mixed in at times.

Recreational crabbing is good this week in the middle and lower Bay regions; many of the crabs being caught are large and heavy and coming from deeper waters. Doublers are very common this week and many crabbers are putting a great catch together by simply dipping doublers off pilings and releasing the sooks.

Freshwater fishing is static this week and following a typical summer mode of fish behavior. The best fishing for all species is in the early morning hours and late evening hours, whether one is fishing for trout or largemouth bass. Anglers will start to see cooler water temperatures later on this month, as night temperatures drop.

Fishing for largemouth bass remains good as anglers follow the bass from the shallower waters in the morning to where they seek shade during the day, under thick mats of floating grass or under the shade of docks, brush, or deeper waters.

Fishing for snakeheads is improved, and anglers are enjoying good fishing in grass areas with weedless frogs or paddletails rigged weedless, and by casting buzzbaits. Working the edges of grass beds and spatterdock fields is also a good tactic with paddletails and large minnows under a float.

Anglers at the Assateague beaches continue to catch a mix of kingfish, spot, croaker, and bluefish from the surf. The best fishing for kingfish is reported to be in the morning and evening hours; pieces of bloodworm on a bottom rig is the bait of choice. The bluefish are being caught on cut spot or mullet. Fishing strips of squid can catch flounder and croaker.

At the inlet and the Route 50 Bridge area, bluefish and striped bass are being caught by casting a mix of bucktails, soft plastic jigs and drifting cut spot or similar baits. Some of the best fishing action has been occurring along the South Jetty. Sheepshead are being caught on sand fleas and flounder on Gulp baits and various natural baits. Using a cast net can provide some excellent flounder baits in the form of small menhaden, silversides, spot, and small mullet.

The back bay channels are providing good flounder fishing, and drifting a variety of fresh baits caught with a cast net can entice some of the larger flounder to take a bait. The East Channel, the Thorofare, and the water near the Ocean City Airport are a few of the more popular locations to drift or slow troll for flounder.

Outside the inlet, trolling small silver Clark or Drone spoons behind planers at a fast clip can provide some good action with Spanish mackerel, while slower speeds will allow bluefish to catch up. Fishing for flounder around some of the inshore wreck and reef sites has been providing some impressive flounder in the past week.

The boats headed out to the offshore wreck and reef sites continue to find excellent numbers of black sea bass for the anglers onboard, and small dolphin are creating a lot of thrills and excellent eating for anglers. A nice mix of flounder are being caught and it is not uncommon to limit out on your excursion.

Fishing at the canyons continues to be lackluster, but those that work hard at it are catching a few yellowfin tuna. White marlin releases are becoming more common, and a large wahoo is being caught now and then. Captains are stopping at the sea bass and lobster buoys, and anglers are baiting small dolphin. Deep drop fishing for blueline tilefish is also helping fill fish boxes.

“Nothing makes a fish bigger than almost being caught.” — Unknown author