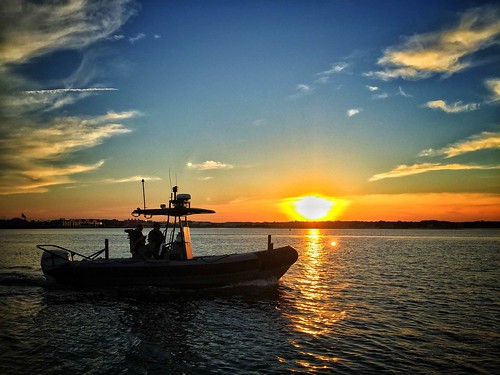 NRP officers charged a man with boating violations and in connection with outstanding warrants in Queen Anne’s County. Police were on patrol near the Kent Narrows drawbridge on June 5 when they observed a vessel tied to the bridge, a violation of U.S. Coast Guard Navigation Rule 9, which prohibits obstructing a narrow channel. The boat’s operator, Dennis Johnson, 60, told officers he was unaware of the rule, however police noted that the drawbridge is conspicuously marked with “No Trespassing” signs on multiple pilings. During a safety inspection, Johnson could not produce the required certificate number, nor did he have a fire extinguisher, throwable flotation device, or sound-producing device on board. In addition, his navigational lights were not operational. Police also learned that he had three outstanding warrants. Officers took Johnson into custody, and cited him for failing to obey navigation rules, failing to display validation stickers, and failing to carry a fire extinguisher. He is currently being held at a detention center and faces up to $1,500 in penalties.

Police arrested a West Virginia man for impaired driving in Washington County. Officers on patrol June 6 were traveling I-70 eastbound in Hagerstown when they observed a vehicle driving erratically and changing lanes without signaling. Police conducted a traffic stop and observed that the operator, Jerimi Shroades, 48, had slurred speech and bloodshot eyes. Officers also located a glass pipe containing a suspected controlled substance. Officers administered a field sobriety test, and based on the results arrested Shroades for driving while impaired and for possessing a controlled dangerous substance. He is scheduled to appear in court at a later date.

A Baltimore County man was charged for possessing a coyote that was brought from Pennsylvania into Maryland. In early July, NRP was informed by the Pennsylvania Game Commission that Steven Keil II, 34, of Pennsylvania, was in possession of a coyote. After investigating further, police learned that Parkton resident Bradley Shelley, 34, had obtained a coyote from Keil, who transported the animal across the state line. The coyote was collected and handed over to Baltimore County Animal Control. Shelley was issued a citation for possessing or transporting a rabies vector species, and two warnings for importing a rabies vector species and failing to obtain a captive wildlife permit. In addition, he faces up to $1,500 in fines. Charges against Keil are currently pending.

In a separate incident, police learned from tips that Jake West Qunate, 26, possessed a coyote and multiple raccoons. Quante told police he had to shoot the coyote because it had started to self-mutilate itself in the cage where he kept it. He added that he no longer had the raccoons because he released them. Police issued Quante two citations for possessing or transporting a rabies vector species, one for each animal. In addition, he faces up to $3,000 in fines. He was also given four warnings, one for importing a rabies vector species, one for failing to obtain a captive wildlife permit, one for possessing a raccoon or opossum without a permit, and one for possessing a raccoon during a closed season.

Police charged a man with poaching fish in Gunpowder Falls State Park. On July 10, officers were on patrol in the state park when they observed two individuals below the train bridge using a flashlight to catch fish in the river. One of the men, Isauro Misael Diaz Montecinos, 25, appeared to have a spear gun. The other had a fishing rod and a white bag used to carry the fish that had been caught. Police observed Diaz shoot at least one fish with the spear gun and place the fish onto a string. A few moments later, Diaz retrieved the string and took the line over to the second person, putting the fish into the white bag. Police searched the bag and located one striped bass, two undersized smallmouth bass, one catfish, one creek chub, and six crayfish. Police issued Diaz 11 citations, including failure to possess a non-tidal license, possession of a weapon in a state park, and fishing for striped bass and smallmouth bass with projectile gear. He is scheduled to appear in court at a later date and faces up to $10,000 in fines.

A Delaware man was arrested July 16 for operating a vessel while intoxicated in Kent Narrows. Officers on patrol observed a boat exceeding the 6-knot speed limit. When officers spoke with the operator, Dale Fry, 51, they say he exhibited signs consistent with alcohol impairment. Police also located two open alcoholic beverages at the vessel’s helm. According to police, Fry could not produce all the required safety equipment during a safety inspection. Fry’s boat registration also expired. He was escorted back to shore and given a field sobriety test, after which police issued Fry three citations for impaired operation, two for safety violations, one for negligent boating, and one for speeding. He faces up to $6,500 in fines and 16 months in jail.