Summer Waterway Users Should Be Alert for Marine Wildlife 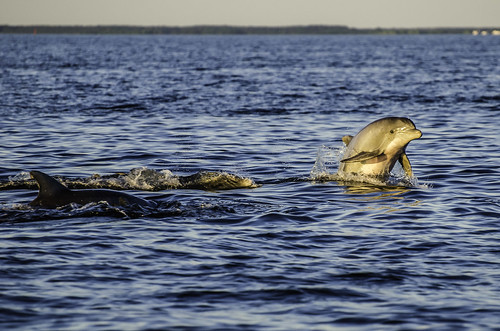 As summer approaches, the Maryland Department of Natural Resources would like to remind people that marine wildlife — dolphins, manatees, sea turtles, whales, and others – are making their seasonal return to the Chesapeake Bay and its tidal tributaries, as well as the Atlantic Ocean and coastal bays.

Anyone who has seen either a marine mammal or sea turtle in Maryland waters is urged to report it to the state Marine Mammal and Sea Turtle Stranding Response Program at 800-628-9944. Anglers, boaters, and beachgoers should especially be on the lookout for stranded, dead, sick, injured, or entangled animals.

In addition to calling the program hotline, anyone who encounters a stranded marine mammal, alive or dead, should follow these steps if possible:

1. Do not touch the animal.
2. Record your location using latitude and longitude, street address, and/or description with landmarks.
3. Estimate and record the length, size, color, noticeable body parts, and movements (if alive).
4. Take photos of the animal.
5. If possible, remain by the animal at a safe distance until stranding staff are able to reach you.

While Maryland’s most common visitors are bottlenose dolphins and loggerhead sea turtles, more than 25 other marine mammal species, and four species of sea turtles have been recorded in state waters.

The department’s Marine Mammal and Sea Turtle Stranding Response program works cooperatively with the National Aquarium in responding to reports of marine animals throughout Maryland’s waters and coastlines.

Marine mammals are specifically protected by federal law, the Marine Mammal Protection Act. In addition, sea turtles and whales are both protected under the 1973 Endangered Species Act. It is illegal to harass, touch, feed, capture, or collect these marine species, alive or dead, including any animal parts or skeletal remains or specimens.