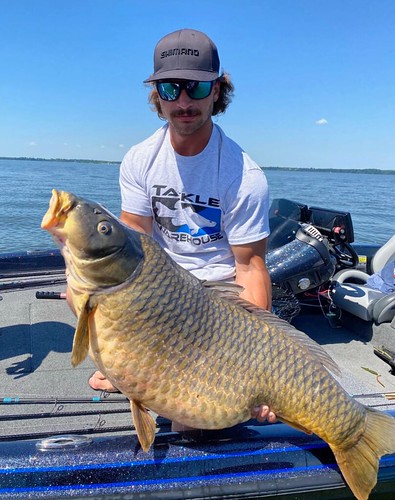 Logan Kuhrmann of Essex is the new state record holder for common carp in the state’s Chesapeake Division. Photo by Matt Weber, used with permission.

The Maryland Department of Natural Resources (DNR) has confirmed Logan Kuhrmann of Essex is the new state record holder for common carp (Cyprinus carpio carpio) in the state’s Chesapeake Division. Kuhrmann, 24, caught the 49-pound carp June 4 while bass fishing in the Susquehanna Flats area of the Chesapeake Bay.

Kuhrmann was using a spinning tackle with a plastic worm and thought at first he’d hooked either a flathead or blue catfish. After a few minutes, the enormous carp was hauled onto the boat and into the live well.

“We’ve seen some really big ones up in the Flats but we’ve never seen one this big ever,”  Kuhrmann said. “The bass fishing wasn’t great but this made my week.”

The catch was weighed on a certified scale by Mike Benjamin of Herb’s Bait and Tackle in North East, and verified by a DNR biologist. The previous record of 44.4 pounds was held by Jimmy Lake with a fish caught off Morgantown Beach in 1978.

(NOTE: This release contains a corrected spelling of the angler’s name, updated on June 8, 2022.)