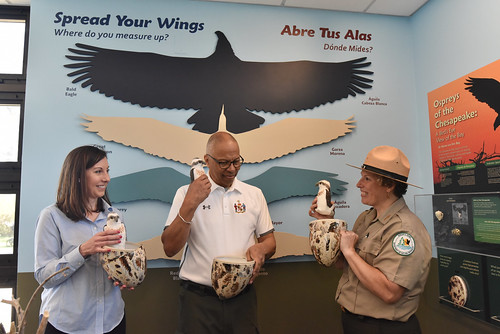 As we approach the start of summer season, DNR is prepared to meet it with new additions to our Maryland State Park system and a growing list of outdoor recreation and education opportunities.

Lt. Governor Boyd Rutherford joined us at Sandy Point State Park to cut the ribbon on our new nature center which will provide the public with educational opportunities about flora and fauna native to the Bay, and the integral part that they play in sustaining its general health. Along with the Center’s interactive displays and information about our Bay – in both English and Spanish – the park also opened a Chesapeake Bay-themed playground. He also proclaimed April 15-22 as Maryland State Park Week for the second year in a row.

In Baltimore County, DNR dedicated a portion of the Gunpowder North Trail in memory of the late Jim Gracie, trout fisherman and stream restoration advocate who served as a long-time member of DNR Sport Fisheries Advisory Commission.  This trail is a fitting tribute to Jim for his extraordinary accomplishments in protection of our state streams, wetlands and coldwater fisheries, and his efforts that contributed to transforming the Gunpowder River into one of the top trout streams in the United States. It was truly an honor to work with him during my time in the Maryland General Assembly and as secretary of DNR as he raised awareness of the importance of water quality in our Maryland streams.

At Patapsco Valley State Park, we also dedicated  our new visitor center to an individual who worked tirelessly to develop it – the William Offutt Johnson History Center is named in honor and memory of the person who worked tirelessly to establish this visitor center. During a 30-plus year career with DNR, Johnson played a key role in creating the Helen Avalynne Tawes Garden in Annapolis, and as a park naturalist at Patapsco Valley State Park, he spent five years converting the last surviving stone duplex from the Avalon Iron and Nail Works into the park’s first full-time Visitor Center that now bears his name.

The week of events culminated on Earth Day, with the Lt. Governor joining us once again for ribbon-cuttings on two new Maryland State Parks on the Upper Eastern Shore – Bohemia River State Park in Cecil County and Cypress Branch State Park in Kent County. These events bookended a week of celebrations and new beginnings throughout our public lands.

As you can see, our staff has been working diligently with our volunteers and partners to ensure that these new additions enhance visitor experience, support our natural resources mission, and provide greater access to Maryland’s outdoors. We invite you to visit and enjoy one of these new locations and stay tuned for additional announcements!