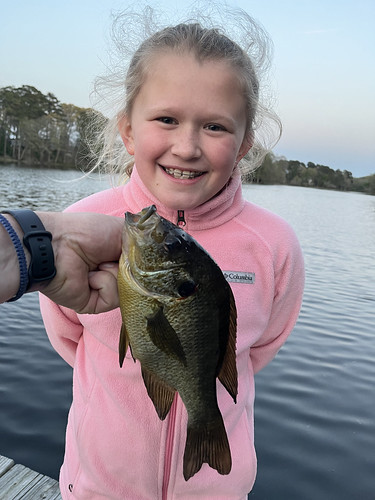 Brady Matthew enjoyed a great family day of fishing with his daughters, catching both sunfish and golden shiners.

The shad run is on, and fishing for both American shad and hickories has been very good for catch-and-release anglers.

The striped bass trophy season got off to a fair start with some large fish in the 40-inch to 50-inch range caught on the first day, May 1.

The 2022 striped bass trophy season will run through May 15. Summer season regulations start on May 16 – be sure to check the DNR website for seasonal regulations in your area of the Bay.

Moderate, windy and wet conditions through Sunday will lead to warming weather later this week. Expect improving water clarity from Sunday through Tuesday. For shad fishermen, Maryland rivers are currently running in the upper 50s to mid-60s and the run is still going on in Maryland’s lower salinity waters. Chesapeake Bay surface water temperatures have increased several degrees since last week to the low 60s, and will likely be in the mid-60s for the start of striped bass season on May 16. There is plenty of oxygen for Bay fish from surface to bottom.

Expect above average flows late in the week due to predicted rains. Expect decreasing water clarity for most of the main Bay as well as many rivers and streams following the wet weekend. Also expect reduced water clarity from algal blooms in the Bush, Gunpowder, Back, Patapsco, upper Nanticoke, and middle Patuxent rivers, and the middle Potomac River from the 301 bridge down to Colonial Beach. To see the latest water clarity conditions, check Eyes on the Bay Satellite Maps on the Maryland Department of Natural Resources website.

There will be above average tidal currents through Friday as a result of the new moon on May 1. 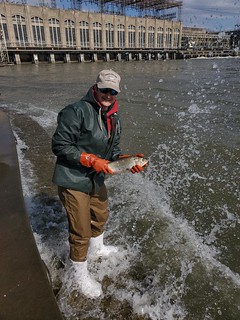 Biologist Matt Jargowski, at the Conowingo Dam, is shown releasing the season’s first tagged American shad as part of our tagging study to estimate the species’ population in the Susquehanna River. Photo by David Sanderson-Kilchenstein, Maryland DNR

Anglers searching for hickory shad in the lower Susquehanna River, Deer Creek, and Octoraro Creek have experienced good fishing as last week’s rains subsided and creek waters warmed and cleared. There have also been reports of American shad mixed with hickory shad in the Conowingo Dam pool and in the river just below it.

Most shad anglers are using a combination of a small shad dart and a small gold or silver spoon in tandem. Gold spoons tend to work best in cloudy water conditions, and silver work when the sun is bright and water conditions are clear White and red shad darts are always popular, but on some days pink, yellow, gold, or chartreuse will stand out. Experienced shad anglers carry a variety of colors and weights to adapt to changing river conditions.

Blue catfish are still a reliable target species – many are fairly large – and can be found in almost every part of the upper Bay, with some white and channel catfish mixing in. We advise using stout tackle, a sinker heavy enough to hold bottom, and circle hook rig baited with fresh cut bait of menhaden, gizzard shad, chicken liver or breast, clam snouts, or other catfish baits that can be purchased at local tackle shops.

Fishing for northern snakeheads is improving as warmer water temperatures cause the fish to be more active, and they will strike bass-style lures. This invasive species can be found in every tidal river and creek in the upper Bay and the Susquehanna Flats. Casting white or chartreuse paddle tails, frogs, and buzzbaits are popular methods. Rigging a lip-hooked large minnow under a bobber can work well when the snakeheads are not striking artificial lures.

The 2022 spring trophy striped bass season began on May 1 and runs until May 15. Upper Bay anglers need to remember that they can only fish for striped bass below the Brewerton Channel. The 2022 striped bass regulations are on the DNR website.

Trolling large bucktails and parachutes along the shipping channel edges near Podickory Point, the Dumping Grounds, and near the Bay Bridge is the most popular method for catching large trophy striped bass in the upper Bay. The minimum size for fish to be kept is 35 inches, with a limit of one fish per angler per day. If you chum or chunk for striped bass, you must use non-offset circle hooks, and fishing with live eels is not allowed. The beach at Sandy Point State Park and the Matapeake Fishing Pier will be popular places for shorebound anglers to fish with bait. 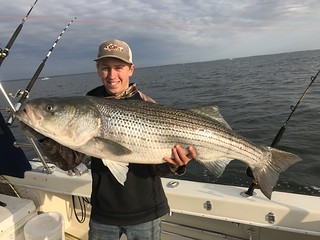 Jonathan Irons of Queenstown, had a great opening day fishing with his father, Mike. Photo by Mike Irons

Striped bass anglers in the middle Bay are reminded that during trophy season, May 1 through May 15, striped bass fishing is only allowed in the main stem of the Bay; the tidal rivers are still closed.

Large parachutes, bucktails, and Mojos with large 9-inch sassy shads in white or chartreuse rigged in tandem or behind umbrella rigs are the best trolling lures for striped bass. Heavy inline weights are used on the deep lines, and unweighted tandem rigs will cover the top waters. At dawn, it is common for the large striped bass to be close to the surface, but boat traffic and bright sunlight will eventually drive them deeper in the water column.

Light-tackle jig and fly anglers enjoyed some success on opening weekend. Good areas for light tackle and fly casting include Eastern Bay, Poplar Island, and any areas where striped bass are suspended near channel edges. The warm water discharge plume at the Calvert Cliffs Power Plant will most likely produce fish on jigs for the rest of May. Large soft plastic jigs in the 7-10 inch range on lead heads are used to target medium and large striped bass. Chunking for striped bass near Dollys Lump or Hackett’s Bar  will produce some large striped bass, but you must use non-offset circle hooks.

Fishing for blue catfish in the tidal rivers should continue for the rest of May. The Choptank and Nanticoke rivers are both good areas for targeting this invasive species. Cut menhaden or gizzard shad are excellent baits, while chicken liver, breast meat, or clam snouts can also work well.

As striped bass trophy season began May 1, anglers were trolling along the steep edges of the shipping channels with large parachutes, bucktails, and Mojos dressed with large sassy shads. As usual, planer boards tend to produce more strikes by deploying a wide trolling spread, along with a few flat lines fished directly off the stern.

Traditional areas to troll for the next two weeks will be the channel edges at Cove Point, Cedar Point, Point No Point, and Smith Point on the western side of the bay. On the eastern side, areas include the steep channel edges from the CP Buoy south to Buoy 76, 72B, and the main channel down the center of Tangier Sound. In the lower Potomac River, the steep channel edge from Piney Point to St. Georges Island and Point Lookout will be good bets for trolling action.

Striped bass are typically swimming close to the surface during early morning hours, and boat traffic will drive them deeper in the water column during the day. Surface water temperatures are warmer than deeper waters so it is often a preferred space for striped bass in the spring.

Blue catfish will continue to offer fun fishing in the tidal rivers through May, and anglers can participate in a conservation effort to help diminish this invasive fish and their predatory effects on native fish populations.

Northern snakeheads are another invasive fish that has spread across every tidal river in Maryland. This is an aggressive predator that feeds on native fish populations. The tributaries to the Potomac River tend to hold some of the largest concentrations of snakeheads. The upper Patuxent River and the rivers and creeks of southern Dorchester County on the Eastern Shore are a close second. Lately anglers have been having good luck casting frogs over patches of grass, and white or chartreuse paddle tails rigged weedless are always a popular bait. A large minnow rigged under a bobber is also a good tactic when lures are not producing. 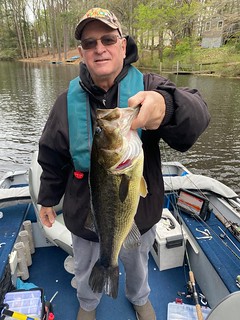 The upper Potomac River water levels have been returning to relatively stable fishing conditions after heavy rains, and water temperatures are holding in the lower 60s. Water temperatures should increase if we get a string of warm sunny days. Fishing the current breaks and deep ledges is a good tactic with soft plastic baits and small crankbaits.

In the central, southern, and eastern regions of the state, largemouth bass are close to spawning or already started. Small ponds usually have the warmest water, followed by larger bodies of water and tidal rivers and creeks. The males have carved out spawning beds in the shallow areas and the females are either on the beds or staged nearby in slightly deeper water. Targeting the largemouth bass that are holding in the deeper waters can be accomplished with small crankbaits, spinnerbaits, jerkbaits, and soft plastics. Any kind of structure such as sunken wood or deep grass are good places to target.

Fishing for crappie should be a good bet until waters become too warm; the cooler water temperatures allow the crappie to freely move in a variety of water depths. Structure is often the key – fallen treetops, sunken wood and brush, or marina docks are good places to look for crappie. Small marabou jigs or minnows under slip bobber, or casting jigs with a very slow retrieve are traditional methods for crappie. 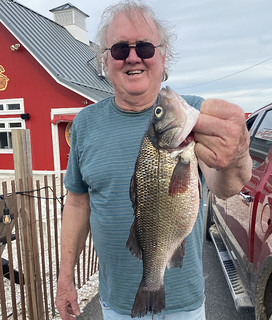 Bluefish have shown up in the surf and the Ocean City inlet, but we have not heard of very large numbers of these toothy fish yet. Surfcasters are still catching a few black drum on sand fleas, but the numbers are down from previous weeks. Clearnose skates continue to be pesky bait stealers, with some spiny dogfish in the mix. Sand fleas have been the most popular bait overall, but a few anglers are also using bloodworms and clams to catch an occasional striped bass, a few being legal-sized. Anglers targeting bluefish should try cut or whole finger mullet, or cut menhaden.

Tautog are still being caught on sand fleas and crab baits along the inlet jetties, the Route 50 Bridge piers, and nearby bulkheads. Flounder are also being caught in the inlet and Route 50 Bridge area, the Thorofare and the channels leading from the inlet. The channels in Assawoman Bay and Sinepuxent Bay also provide good flounder fishing opportunities when the water conditions are clear. Soft plastics such as Gulps are catching many of the flounder as well as squid strips and minnows.

There were two very interesting catches recently in the Ocean City area. Local angler “Big Bird ” Cropper caught a rare 32-inch pollock in the inlet while fishing for striped bass and bluefish. Also, Maryland has a new state record white perch in the Atlantic Division, which includes both the ocean and coastal bays. Robert “Bob” Hudson, of Ocean Pines, unexpectedly landed the 1.85-pound white perch in the Isle of Wight Bay.

Tautog fishing is still the most popular fishery at the offshore wreck and reef sites, with some fair days and some good days depending on sea conditions and swell. The wind tends to dictate when boats can take anglers out to fish, but when conditions are favorable some rather large tautog are being caught. Finally, a reminder that black sea bass season will open on May 15.