While the Maryland Department of Natural Resources may be best known for its conservation of Maryland’s treasured natural resources, our mission also includes the preservation and interpretation of Maryland’s historical and cultural resources. That’s why this spring we have been proud to celebrate all our public lands and the important historical figures that are tied to our natural history.

One of the greatest examples is Harriet Tubman who used her familiarity and knowledge of the Eastern Shore’s landscapes for the greater good. This past March we celebrated the 200th birthday of Harriet Tubman, and the fifth anniversary of the opening of the Harriet Tubman Underground Railroad State Park and Visitor Center in Dorchester County. We were honored to be joined by the Governor and First Lady as well as the Lt. Governor and Second Lady along with Tubman family members and hundreds of guests at our 17-acre park. The park provides visitors a powerful opportunity to experience the land and water through Harriet Tubman’s eyes and to walk in her footsteps on the very ground she traveled to lead others to freedom. In this edition of the Maryland Natural Resource, we are proud to share some wonderful moments and exhibits from that celebration, and remind you that more is to come for her bicentennial this year.

We were also pleased to have Lt. Governor Boyd Rutherford join us at Sandy Point State Park to proclaim April 15-22 as Maryland State Parks Week for the second year in a row. He cut the ribbon on Sandy Point’s new nature center which will provide the public with educational opportunities to learn about flora and fauna native to the Bay, and the integral part that they play in sustaining its general health. A key aspect of the center will be steps everyone can take to protect the Bay from the effects of pollution and climate change.

Earth Day was also a great opportunity to thank the Governor and Lt. Governor for their support of our public lands. The Governor’s Fiscal Year 2023 budget as passed by the Maryland General Assembly includes a re-cord investment of $75 million for the Maryland Park Service—a 20-year high in funding. Additionally, the governor’s budget proposes $37 million for critical maintenance projects so we can make important upgrades and repairs to our facilities. Last but certainly not least, Program Open Space remains fully funded for the seventh year in a row.

This support, along with our incredible team of dedicated professionals, means that we can continue to care for the lands that have been entrusted to us for generations to come. 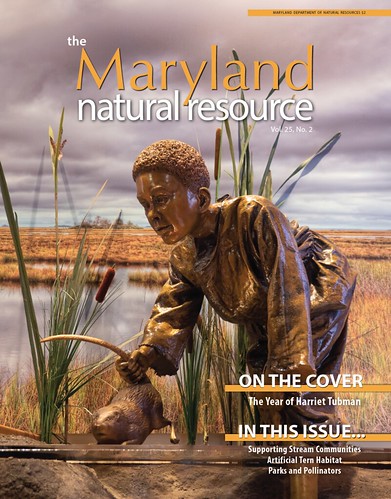 The cover of this edition of the Maryland Natural Resource features a photograph of an exhibit at Harriet Tubman Underground Railroad State Park. In the exhibit, Harriet Tubman is shown harvesting a muskrat. The young Tubman’s labor while she was enslaved included trapping muskrats in the marshes around the Brodess farm. This forced work brought Tubman in close contact with the marsh environments through which she would eventually lead enslaved people to freedom.