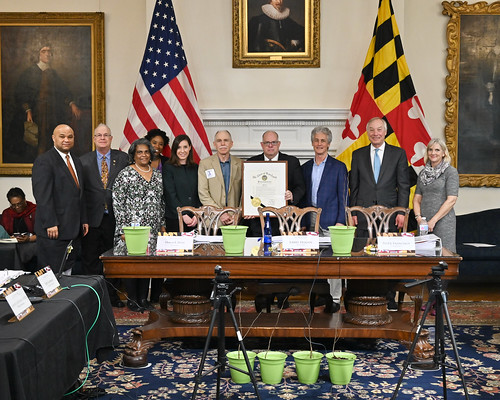 Resuming an annual tradition that was on hold during the pandemic, Maryland Department of Natural Resources (DNR) Secretary Jeannie Haddaway-Riccio honored Maryland Arbor Day by presenting tree seedlings grown at the state nursery in Caroline County to the members of the Board of Public Works – Governor Hogan, Comptroller Peter Franchot, and state Treasurer Dereck E. Davis.

Additionally, board members received note cards featuring artwork from the 2022 Arbor Day poster contest, an annual event held earlier in the year for fifth graders throughout the state. Maryland First Lady Yumi Hogan once again served as a guest in selecting the winners this year; a red bud seedling was also sent to her office in appreciation.

DNR celebrates Maryland Arbor Day every year by giving away trees for planting and honoring the achievements of individuals who have contributed to the state’s forest products industry. Governor Hogan and Secretary Riccio welcomed and  recognized furniture makers Jim McMartin and Jim Beggins, who crafted the Wye Oak Desk used by every governor since 2004. This desk is made from the wood from Maryland’s celebrated, centuries-old Wye Oak tree, which fell during a thunderstorm on June 6, 2002.

Staff also delivered seedlings and note cards to the Maryland General Assembly, where the department and the legislature honored a Maryland Forest Service employee. 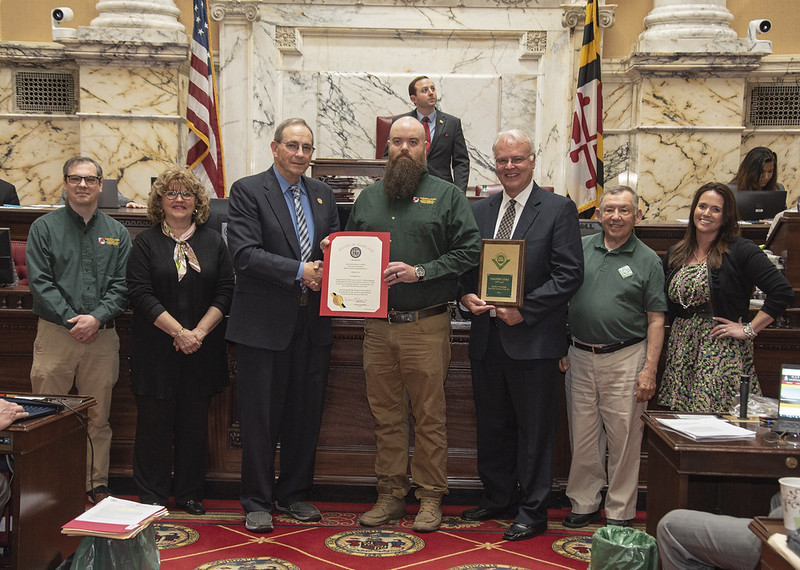 Maryland Forest Ranger Tim Cole was named the American Forest Foundation’s American Tree Farm System’s Northern Region Inspector of the Year. He was selected from among other inspectors across the northeastern United States. He has served as the Forest Ranger for Garrett County since 2013, and a certified tree farm inspector since 2014. Senator George C. Edwards presented a proclamation to Cole, recognizing him for outstanding stewardship in managing forest resources and increasing public understanding of the benefits of sustainable forestry in Garrett County.