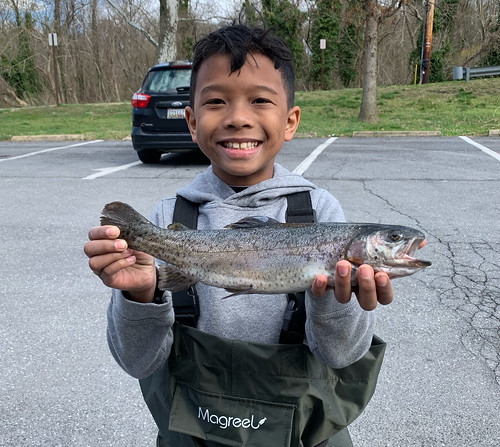 The proud and happy face of Jason Punsalon says it all. Photo by Rodney Punsalon

Trout anglers had their big day last Saturday for what most call the opening day of trout season, although trout have been generously stocked for months. It is a time for our younger anglers to enjoy some success in pursuing trout in local waters with moms and dads.

All Maryland waters of the Chesapeake Bay and tributaries except the Potomac River will be closed to all striped bass catch-and-release fishing starting Friday, April 1 until May 1. Anglers are urged to become familiar with areas that will open May 1 and later season change dates at the Maryland Department of Natural Resources online striped bass regulation map.

The chilly weather the past few days has temporarily cooled Maryland waters for gamefish including shad and herring, which are spawning or preparing to spawn in the next couple of weeks. Chesapeake Bay surface water temperatures have dropped to the mid to upper 40s. Smaller streams and downwind areas on a sunny day will warm faster and can hold water temperatures in the upper 40s to mid 50s. Such areas  where there is also low salinity will be prime to look for shad and herring on their spawning runs.

Expect above average flows for most Maryland rivers and streams this week. Expect average water clarity in the Bay, with some reduced water clarity in localized areas of some rivers following rains on Thursday. To see the latest water clarity conditions, check Eyes on the Bay Satellite Maps.

There will be above average tidal currents all week as a result of the upcoming new moon on April 1.

Fishing for blue catfish is very good this week in the lower Susquehanna from the Conowingo Dam pool south and out into the Bay. Gizzard shad are piling up near the dam and it can be easy to catch a few in a cast net for fresh catfish bait. The large flatheads tend to hold in the dam pool looking for tidbits of fish coming out of the turbine wash.

White perch are being found in the middle to upper sections of the region’s tidal rivers this week. Most of the white perch being caught are post-spawn and are being caught on small jigs and shad darts tipped with pieces of minnow or grass shrimp. Using a bottom rig baited with grass shrimp or pieces of bloodworm also work well. The Bush, Middle, Back, Patapsco, Sassafras, Bohemia, and Chester rivers all have populations of white perch in them. A mix of blue catfish and channel catfish can also be found in all of the tidal rivers.

The striped bass catch-and-release season will be closed for one month beginning Friday, April 1. The recent string of cold weather and windy conditions have not been favorable to the Susquehanna Flats striped bass catch-and-release fishery. Recent reports are reports of limited success with smaller-sized male striped bass but the larger females tend to be difficult to find. Casting soft plastic jigs, paddle tails, large diving crankbaits, and jerkbaits have been the favored lures to use along the channel edges.

Those fishing with cut gizzard shad or bloodworms on circle hooks are catching a few striped bass but mostly are attracting blue catfish and being pestered by white perch nibbling on their bloodworms. Striped bass catch-and-release resumes May 1.

Recent cold weather has caused water temperatures in the Bay and tidal rivers to drop significantly. Anglers are still catching white perch in the tidal rivers this week; most all are post-spawn and being found in the areas below the spawning reaches. Working small jigs and shad darts in some of the deeper holes is working well, as are bottom rigs baited with grass shrimp or pieces of bloodworm. Now and then a few yellow perch can be part of the mix.

Fishing for channel and blue catfish is good in the Choptank River, from the town of Choptank up towards Denton. The Dover Bridge area recently is one of the best locations for blue catfish. For shorebound anglers who are not familiar with the area, there is a nice access point at the site of the old bridge crossing, with a small parking lot on the east side of the river. Other shore access points include a small area with a parking lot at Gilpin Point, and also at Ganneys Wharf, Martinak State Park, and Crouse Park and boat ramp in Denton. Fresh cut bait of white perch, gizzard shad, menhaden, clam snouts, chicken liver, and whatever bait you can think of will work. Sometimes the list of prepared baits that catfishing anglers invent seems endless.

Dropping water temperature put a chill on recent striped bass activity. Striped bass can be spotted on depth finders suspended near the bottom at the Bay Bridge piers and at times along channel edges. The warm water discharge at the Calvert Cliffs Power Plant is also a big draw for those jigging in the discharge current. All catch-and-release fishing for striped bass is closed April 1 until the spring trophy striped bass season opens on May 1 below the Brewerton Channel to the Virginia state line. 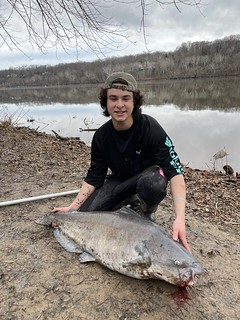 Fishing for blue catfish in the Nanticoke, Patuxent and Potomac rivers is very good, and a popular and fun way to enjoy plenty of action with some hard-fighting and good-eating fish. There is no minimum size and no daily limit for this invasive fish, so it is a dream for anglers who love action and eating what they catch.

The white perch spawning runs are about over in the region’s tidal rivers, but the perch can still be found in the middle to upper stretches of the rivers. They can often be found in the deep pockets and holes in the upper reaches and in the channels of the mid-river waters. It has been a mystifying spawning run this year, most likely due to the up-and-down water temperatures caused by cold weather and even some snow runoff in many areas.

Casting and working small soft plastic jigs and shad darts along the bottom in the upper reaches of the tidal rivers and creeks is a good tactic for post-spawn white perch. Tipping those jigs with a piece of minnow or a grass shrimp helps up the odds of getting their attention. In the middle river sections, fishing the channels with a bottom rig baited with grass shrimp or pieces of bloodworm will do the trick rather nicely.

Reports of the first American shad and hickory shad were heard recently from the tidal Potomac River near the Chain Bridge within the District of Columbia. This is a very popular place to fish for them but you must purchase a D.C. fishing license to fish there.

Northern snakeheads are starting to come to life with warming water temperatures. We still have a ways to go for water to be warm enough for good fishing with lures. Fishing large minnows under a popping float or a bobber is the most successful way to fish with rod and reel. Bow fishing enthusiasts are finding plenty of northern snakeheads and blue catfish in the shallow waters at night and shooting some impressively sized fish. 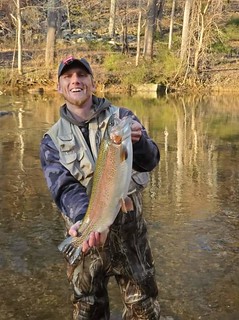 Traditional opening day for trout was last Saturday, and all were happy with the rewards of catching a limit of trout to take home. Many reported limiting out by 7 a.m. with their five trout, and got home in time for breakfast. Others were lucky enough to catch a trophy trout that often weighed more than six pounds. These trophy trout were placed at every put-and-take location last week before Saturday’s open.

The stocking of trout will continue for the next month or so in the trout management waters, with generous numbers of fish being delivered. DNR crews have been continuously producing the best trout possible and in the greatest numbers at our hatcheries, and are working hard to get them out to every location.

Though we are often asked, the department no longer produces and posts an advance trout stocking schedule, for several reasons. Trout stocking is heavily dependent upon weather conditions such as storms, water temperatures, water levels, and on occasion, ice barriers, which means our crews need to be flexible and change their schedules and routes on short notice. Poaching is also potentially minimized when stocking is not advertised in advance. 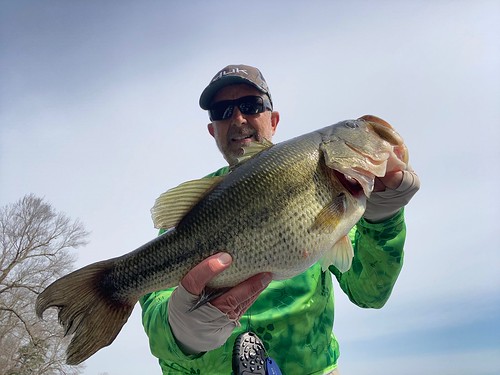 Herb Floyd holds up a hefty Eastern Shore largemouth before slipping here back into the water. Photo courtesy of Herb Floyd

As a service to our trout anglers, we post stocked locations as soon as possible after they have been done. All information regarding trout stocking can be found on our website. Some upgrades to the site include new selections under map tools, allowing one to see when different trout management waters were stocked by date or by the month.

Fishing for largemouth bass has been very good despite the cold weather, and will only get better with warmer weather in the forecast. Most are fishing a little deeper in the morning hours along channel edges, transition zones, and near deep structure. Jigs, crankbaits, and stick worms rigged wacky fashion have been favorites. As the afternoon sun warms the shallows up anglers are having good success with jerkbaits, spinnerbaits, and lipless crankbaits. 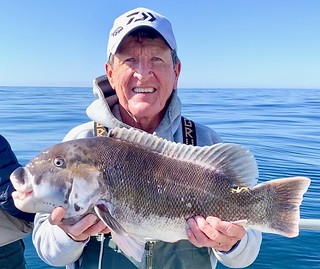 This gnarly-looking tautog was tagged and quickly released back into the ocean. Photo by Monty Hawkins

This past week’s weather has made it difficult for anglers in the Ocean City area,  whether they are trying to fish from shore, the back bay, or offshore, it has been downright cold and windy. Tautog are being caught at the inlet and Route 50 Bridge area near bridge and dock piers as well as bulkheads. Sand fleas and pieces of green crab have been the most popular baits. A high percentage of the tautog being caught are under the minimum size, but there is plenty of action.

Anglers are also catching a few striped bass around the harbor area, the inlet rocks and the Route 90 Bridge. Working soft plastic jigs and paddle tails down deep to where the fish are suspended tends to do the trick. Nearly all of the striped bass fail to meet the 28-inch minimum, but now and then a legal one is caught. Reports are that some persistent angler has caught the first flounder of the season.

The ocean has been stirred up quite a bit lately but there is promise that conditions will improve this week with calmer winds. Anglers are enjoying good fishing for tautog at the offshore wreck and reef sites when boats are able to venture offshore.

“The fisherman even has a phrase to describe what he does when he studies the patterns of a river. He says he is ‘reading the water’, and perhaps to tell his stories he has to do much the same thing.” – Norman Maclean