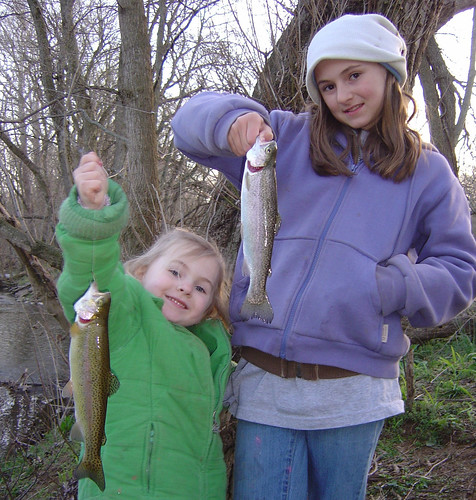 Put-and-take trout anglers will have their day this Saturday, March 26, as the traditional opening day kicks off at 5:30 a.m. throughout Maryland. This is a wonderful time for our younger anglers to achieve success in catching some trout, and for adults to share it with them. Maryland Department of Natural Resources hatchery crews and biologists have been working hard to get all of the trout out this week, and we hope you have a wonderful time!

Remember you can buy licenses and other services online through the DNR COMPASS portal.

The past week’s weather helped warm Chesapeake Bay waters for gamefish including shad and herring which are spawning or preparing to spawn in the next couple of weeks in Maryland rivers and streams. Chesapeake Bay surface water temperatures have risen to the upper 40s and low 50s. Smaller streams and downwind areas on a sunny day will warm faster and can hold water temperatures in the upper 50s. These areas, where there is also low salinity, will be prime to look for shad and herring on their spawning runs.

There will be above average tidal currents Monday and Tuesday as a result of the upcoming new moon on April 1.

For more detailed and up-to-date fishing conditions in your area of the bay, be sure to check out Eyes on the Bay’s Click Before You Cast. 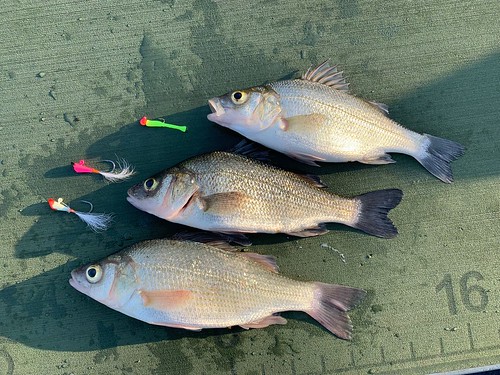 Reports are that Susquehanna Flats fishing has been slow the past couple of weeks, with only a few male striped bass being caught and released. This may change soon as water temperatures warm, and the countdown begins for large female striped bass to show up for the party. There is some rain in the forecast this week but unless it is a deluge it should not affect conditions too much. The Susquehanna Flats catch-and-release season closes on March 31 and will not reopen until May 16, when anglers will be allowed to keep one striped bass between 19 inches and 26 inches per day.

The yellow perch spawn is about over in upper Bay tidal spawning rivers, as evidenced by strings of yellow perch eggs hanging in submerged branches, but there is still an active fishery for post-spawn yellow perch in the middle sections of those rivers. White perch are beginning to arrive in the spawning rivers and the lower Susquehanna; anglers are reporting catching small male white perch. Small jigs and shad darts tipped with a piece of minnow or grass shrimp work well for white perch. Lip-hooked minnows or beetle spins tend to work best for yellow perch.

Fishing for blue catfish is good in the lower Susquehanna River and surrounding areas, and in the tidal rivers of the upper Bay. They offer some fun action, plenty of pull, and excellent table fare if prepared properly. Fresh-cut gizzard shad or white perch make excellent baits, as do chicken liver, gizzards, clam snouts, night crawlers, or prepared baits. 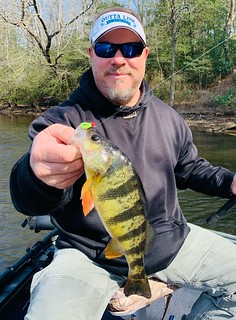 Captain Andy Wayson managed to find this beautiful yellow perch in the upper Choptank on Tuesday. Photo by Rich Watts

Anglers are finding it hard to let warm, sunny, and windless days pass by without venturing out on the Bay to try a little catch-and-release fishing for striped bass. Surface water temperatures have hit the 50-degree mark for the first time this spring. A few boats are trolling but most are jigging with soft plastics over marked fish suspended in the channel areas. The Bay Bridge piers always offer structure for striped bass and many of the resident fish spent the winter hunkered down there in the deeper waters, so naturally the bridge is a good place to check.

The Calvert Cliffs Power Plant warm water discharge is attracting striped bass moving up the Bay, which also attracts a fleet of boats and anglers wishing to drift in the current and jig close to the bottom. Most anglers know that it is a supreme breach of fishing etiquette to anchor up, and holding position with GPS-controlled electric bow motors will get the same amount of stink eye and unmentionable verbal comments.

As a reminder, all catch-and-release fishing of striped bass in all Maryland portions of the bay will close from April 1 to April 30.

The striped bass spawning rivers are closed to all striped bass fishing at this time. The spawning populations of striped bass are arriving and the first faint but familiar scent of spawn was detected in the upper Choptank River, and most likely is in the Nanticoke as well. The most active spawning usually occurs in early April.

The 2022 yellow perch spawning run in the Choptank River system will go down as a mystery that may never be solved. Most yellow perch that are being caught by anglers now are post-spawn and found miles below the traditional spawning grounds. Lip-hooked small minnows on a bottom rig or a small jig or shad dart tend to work best.

Minnows on a bottom rig or small jig will also catch white perch, which are providing most of the action in the upper sections of the tidal rivers. On the upper Choptank, the best fishing is reported to be between Denton and Greensboro. Survey evidence shows that about 75% of the white perch spawn has occurred as of this week. Biologists also report that white perch in the 9.5-inch size range tend to be the most prolific.

Alewife river herring can be seen swirling and splashing in the upper reaches of spawning rivers. They will soon be followed by blueback herring and hickory shad. The alewife herring can be caught by working very small shad darts along the bottom of channels and deep pockets in the spawning areas, and can offer some fun light-tackle catch-and-release fishing fun. The Hillsboro area on the Tuckahoe and the Red Bridges area on the Choptank are good places to find these fish. All river herring and hickory shad are protected and must be returned to the water unharmed.

Fishing for catfish is a fun opportunity this week – channel catfish and white catfish are in the region’s tidal rivers. Blue catfish can be found in the Choptank River in the Dover Bridge area this week. Be advised the Choptank River now holds a lot of striped bass getting ready to spawn, so anglers searching for catfish are urged to use circle hooks. In reality, circle hooks used with a fish-finding rig or a sliding egg sinker are a very efficient way to hook up with catfish, and if a striped bass is caught by accident it can be quickly released without harm. Fresh-cut baits of gizzard shad, white perch, rangia clams, clam snouts, chicken liver, and prepared baits are all good choices. Nightcrawlers usually make good bait but the presence of white perch nibbling on your bait will drive one crazy.

Fishing for white perch in the Nanticoke River and the Marshyhope has been good this week. A fair portion of the white perch have already spawned, but there is nothing wrong with catching them as they leave the spawning stretches of the river and the creeks that feed into it. The main stems of the Wicomico and Pocomoke rivers also offer good fishing for white perch. Casting and jigging with small shad darts and small jigs tipped with grass shrimp or a piece of minnow work well. Other anglers are having good luck with simple bottom rigs baited with grass shrimp or bloodworms.

Several of the tributaries to the Potomac are providing good fishing for white perch this week. Allens Fresh at the head of the Wicomico River is a good place to find white perch. Mattawoman Creek has always been a great place to find white perch during their spring spawning run. Most anglers are fishing the section of the creek behind Indian Head and before Mason Springs. Working shad darts and small jigs along the bottom or using a bottom rig baited with bloodworms or grass shrimp are working well.

Saturday, March 26 is many things to put-and-take trout anglers. Although this last Saturday in March is considered the opening day of trout season, DNR crews have been stocking trout regularly since October. Anglers of all ages will be out in force at their favorite trout fishing location. There is some rain predicted later on this week but should lighten up for Saturday morning. If you have young anglers in tow, it might be wise to have some dry jeans and shoes in your vehicle. Muddy and slippery banks will surely claim a few anglers wearing anything less than waders.

DNR biologists and hatchery staff are working overtime this week hauling trout into trucks and down to your favorite fishing hole. Unfortunately the restriction on volunteer help continues so it is a back-breaking job to move thousands of pounds of trout in a very short time.

Powerbait will be one of the most popular baits for rainbow trout, followed distantly by garden worms. Most any kind of light spinning tackle will do fine and don’t forget a landing net – some might remember a funny video of an angler jumping into the Patapsco years ago to bear hug a 6-pound rainbow trout because he did not have a landing net. Hatchery crews will be loading these holdover or trophy trout on every truck and each location will receive a few to make a lasting memory for some very lucky trout anglers. They are also stocking golden rainbow trout, which tend to thrill our younger anglers. All in all there will be a lot of fun memories made this weekend.

Although trout fishing will take center stage, many anglers will be out pursuing their own favorite fish species. DNR Field Operations Manager John Mullican reports that the upper Potomac River is in good shape this week – the water temperature is about 53 degrees and fishing for smallmouth bass is very good. A new state record muskellunge was caught in the upper Potomac recently by Kyle Mullenix, who was fishing with live bait.

Largemouth bass are one of the most popular freshwater fish in the country, and certainly in Maryland. The tidal Potomac water temperatures are in the 50s, grass is emerging, and the largemouth bass are very active and feeding aggressively. Largemouth tend to be moving freely but are holding in waters close to structure and shallower areas. Often they will be in the shallows later in the day finding warmth in the afternoon sun. Stick worm rigged wacky fashion are a good choice when working structure; lipless crankbaits, spinnerbaits, and jerkbaits are good choices when working open waters. 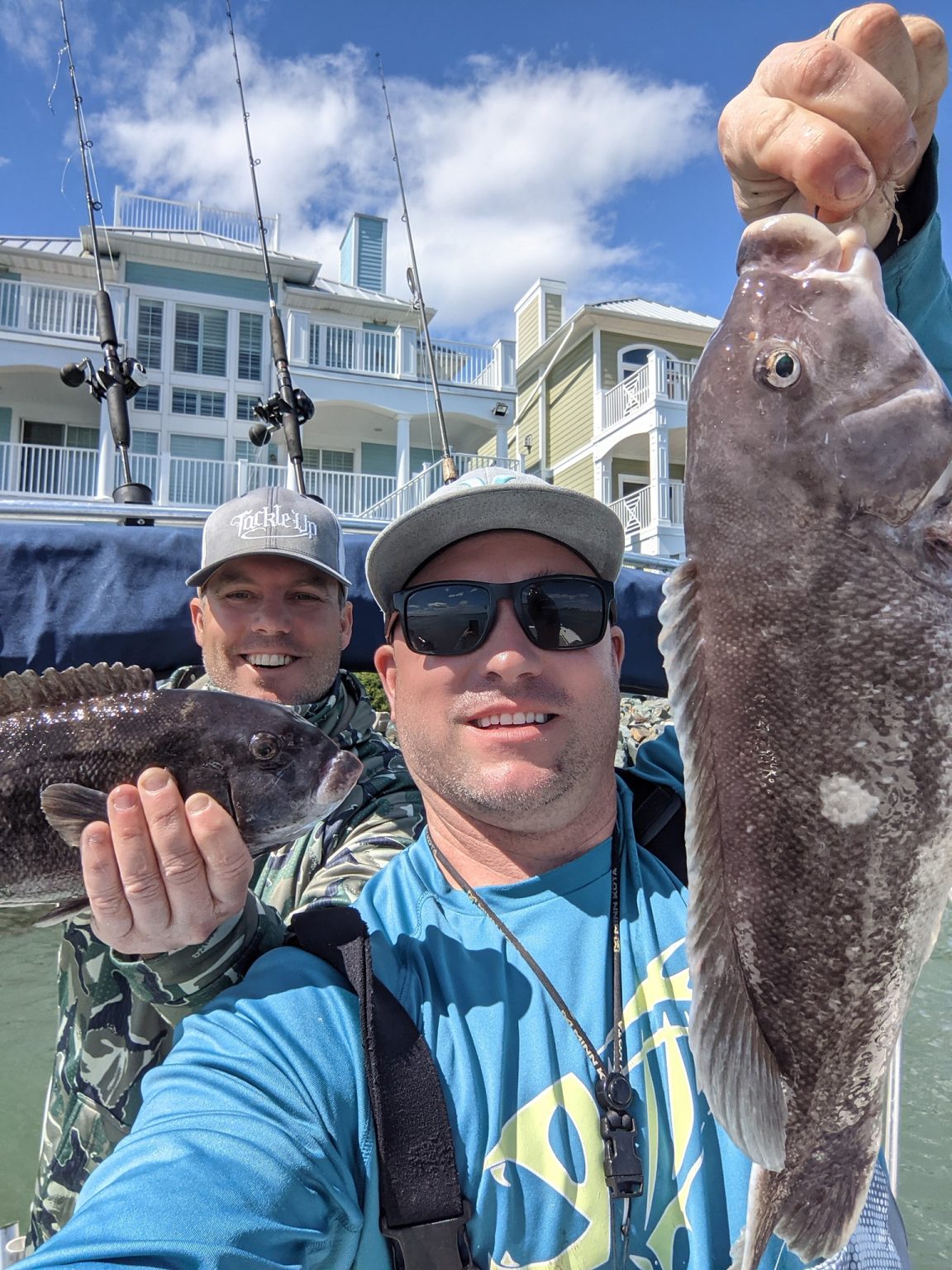 Derek Yobst and Blake Gunther are all smiles with this pair of tautog. Photo courtesy of Scott Lenox

Anglers are enjoying good tautog fishing inside the Ocean City Inlet near the Route 50 Bridge piers, the inlet jetties, and the bulkheads and docks of the commercial harbor. There are a fair percentage of fish that do not meet the 16-inch minimum size but there is plenty of action. Pieces of green crab and sand fleas are the most popular baits.

Anglers casting jigs and swimbaits near docks and the Route 50 Bridge inside of the inlet are also catching and releasing striped bass that fall short of the 28-inch minimum size. There is also some striped bass action being reported at the Route 90 Bridge piers.

The boats heading out to the offshore wreck and reef sites are finding large tautog for their anglers. Weather has affected the ability of captains to venture offshore, but when the winds lay down good fishing is being reported.

“At the commencement of the opening day, and until the young maple are half grown, bait will be found more successful than the fly.” – George W. Sears