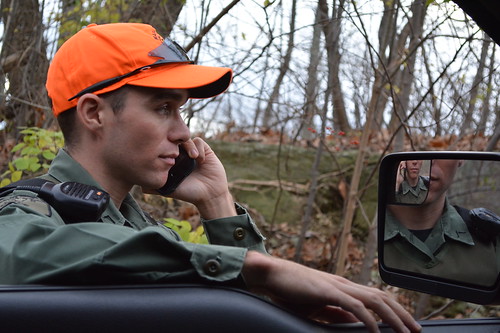 The Maryland Natural Resources Police (NRP) cited numerous individuals for hunting and fishing violations throughout the state in December.

NRP charged a Baltimore County man with trespassing and hunting without permission. On Dec. 18, police investigated a tip that someone was hunting on county property in Ellicott City, and located hunting gear and an unattended tree stand there. Shortly after arriving, officers observed Wesley Peters, 35, exiting the woods. Police say Peters eventually admitted he left the tree stand in an attempt to avoid the officers because he did not have permission to hunt. He also told police that he hid his hunting equipment and bow and killed a deer from the same stand two months earlier. Police charged Peters with hunting without permission, hunting within a safety zone, knowingly recording false information when reporting the harvest of any deer, failing to wear fluorescent clothing, and failing to carry a photo ID. Peters faces up to $1,485 fines if convicted.

Police charged a man with hunting over bait and installing a permanent tree stand in Doncaster Demonstration State Forest in Charles County. On Dec. 5, police investigated an area where they had located a bait pile close to a permanent tree stand a day earlier. While there, they observed Grant Wessinger, 24, actively hunting in the tree stand and not wearing the appropriate daylight fluorescent orange or pink clothing. According to police, Wessinger did not have a photo ID, which is required while hunting in Maryland. Wessinger later admitted to police that he placed the tree stand and bait about two weeks ago. As a result, he was charged with hunting over a baited area, failing to wear appropriate attire during firearms season, hunting on a Sunday where it’s not permitted, and illegally using a permanent tree stand. He faces up to $5,000 in fines.

A Montgomery County man was charged with several violations after police followed tips to discover an elevated hunting blind, feeder, and trail camera in a residential area of Gaithersburg. According to police, they also received tips that someone was using the spotlight at night. While investigating on the night of Dec. 1, an officer observed the spotlight attached to a blind, with the light aimed at a feeder. As the officer approached the blind, he located Jose Rivas, 48, who initially attempted to discard his firearm and initially denied that he was hunting. However, Rivas later told police he was deer hunting, after police located an air rifle with a night vision scope nearby. Rivas, of Sandy Spring, was charged with hunting on private property without permission, hunting without a license and hunter safety certificate, and hunting deer at night. He was also charged with three counts of hunting within a 150-yard safety zone of a dwelling. He faces up to $6,000 in fines, and his air rifle was seized.

A Somerset County man was charged with exceeding the daily oyster limit. On Dec. 17, officers were on boat patrol in Kedges Straits, in the Chesapeake Bay north of Smith Island. They observed a vessel power dredging and approached the operator, Willie Parks, 57, of Smith Island. As the officers pulled close to Parks’ vessel, they could see that he had two five-gallon buckets of oysters on the deck next to the engine box. Parks stated that he had 10 bushels, but police counted an additional two bushels, which exceeds the limit. As a result, parks was issued a citation for exceeding the daily oyster limit with a power dredge gear. Police cited Parks and instructed him to dump a one-bushel basket and two five-gallon buckets of oysters overboard.