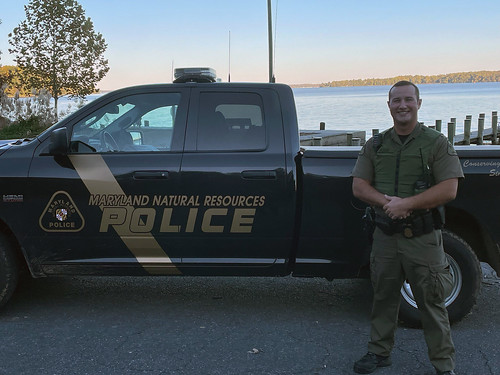 A Maryland Natural Resources Police Officer rescued a suicidal woman who jumped into the Bohemia River in Cecil County.

Officer First Class Jacob Gerczak was on patrol in the Chesapeake City area at about 5:20 p.m. on October 31 when he observed a woman standing on the end of a pier overlooking the Bohemia River. The five-year veteran officer knew something was suspicious. Moments later, the woman jumped from the pier into the river.

Gerczak immediately exited his vehicle and sprinted to the end of the pier. He saw that the woman’s head was barely above water, her eyes were closed, and she was struggling to breathe. In full uniform the officer immediately dove into the rough waters of the Bohemia River, and as he swam closer to the woman and grabbed hold of her, she told him she no longer wanted to live. Gerczak was determined to save her from making a disastrous decision.

While in the cold water at high tide for about 15 minutes, Gerczak reminded the woman that her family and friends did not want anything tragic to happen to her, and that he wanted her to be OK and that he was here to help. The officer successfully removed her from the water by holding her and swimming back to the pier, after which she became more aware and began to cry. He continued to comfort and communicate with her until local emergency personnel arrived to provide her with medical attention.

Gerczak said that although he received calls similar to this during his career, this was his first time jumping into the cold waters to perform a rescue. He is grateful to be at the right place and the right time to save a life.

“We are fortunate to have selfless officers in our agency that would put their lives on the line to save others,” NRP Col. Adrian Baker said. “I commend Officer First Class Gerczak for his selfless and swift action that literally saved a woman’s life.”