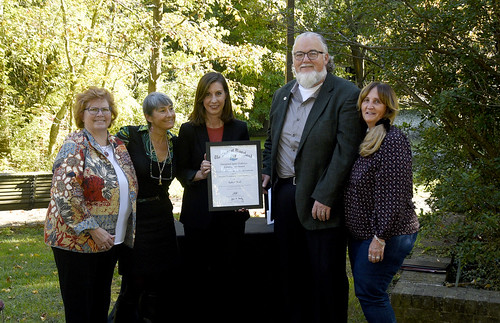 The Maryland Sport Fisheries Advisory Commission and Maryland Department of Natural Resources (DNR) presented annual awards for recreational fisheries lifetime achievement to Robert Wall and the late Joseph W. Brooks. The presentations were made in a ceremony held October 20 at Helen Avalynne Tawes Garden in Annapolis.

The commission recognized Baltimore resident Wall for his ardent support of fishing and education in urban areas and his 45 years of dedicated service with Baltimore City Parks and Recreation. His love of Patterson Park and city recreation began as a volunteer at the age of 11. For more than 25 years with the city, Wall oversaw and organized the annual Patterson Park Boat Lake fishing rodeo.

Wall retired recently from the city, but he still gets involved on a volunteer basis, making sure the next generation of anglers is just as excited as their predecessors.

“I can honestly say that I have never met anyone who has more passion and commitment to providing the youth (and adults) with recreational fishing opportunities,” Maryland DNR fisheries biologist Letha Grimes said.

Brooks was an award-winning fly-fisherman writer, author and conservationist. Joe appeared regularly on the “American Sportsmen” television show with Curt Gowdy in the 1960s, and he was the founder of the Order of the Jungle Cock, an organization that works to bring outdoor recreation to disadvantaged youth.

Brooks pioneered saltwater fly fishing and targeting species that were thought impossible to catch with a fly. He was also the first person to pioneer “adventure fly fishing” by traveling to remote places around the world that had never been fly-fished before. The Baltimore City native died in 1972, and his posthumous award was accepted by Joe Janney on behalf of the Brooks family.

Kreh and Lewis were honored along with Brooks and Wall in the October ceremony, as an in-person presentation could not be held last year due to the pandemic.

Lewis is known for his ardent support of fishing conservation and education and of the Chesapeake Bay’s health and restoration. He began coordinating, supporting and donating to a whole range of activities from government relations, habitat projects, and sustainable fisheries management education all the way to youth fishing events.

Kreh was a world-renowned fly fisherman and conservationist, and a leading face and voice in the Maryland angling community for decades. The posthumous award was presented to Tony Tochterman on behalf of the Kreh family,