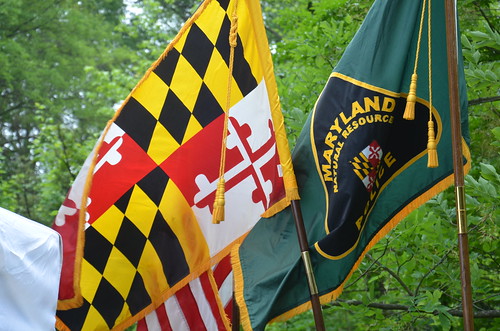 The Maryland Natural Resources Police (NRP) Color Guard is composed of disciplined officers tasked with safeguarding and displaying the flags—known as colors—at ceremonial events for law enforcement officers and civilians, including memorial services, inaugurations, and parades. The color guard honors a tradition that respects those serving in law enforcement, both present and past; and their history is rooted in the military.

In centuries past, soldiers used the colors to mark the location of their regiment on the battlefield, rallying points to be defended with their lives. To lose your colors was the ultimate disgrace; this is why the colors are always guarded, and those who serve in the guard are still regarded with high honor.

Their presence is instrumental in conveying the agency’s appreciation and respect of its duties and mission. Often present during emotional or solemn events like memorial services, a member of the color guard must maintain their bearings, stature, and composure, often standing for long periods of time. 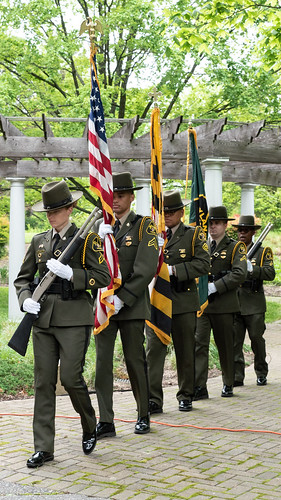 The officers selected to be a part of this group are men and women that exhibit both physical and mental endurance. Each member maintains a primary duty when not performing. The color guard is composed of field officers, supervisors, and special operation officers. They most often hold the rank of sergeant or below, because this detail’s assignments can be sudden and officers must have a flexible schedule to train and attend their functions.

To stay adequately equipped and prepared, members train often. Part of their training includes learning precise movements. When marching, the color guard will move in formation and bear the respective firearm or flag. They must move in unison and be prepared to execute on command, avoiding distractions. Members will often spend time before an event ensuring that their respective uniforms are impeccable.

The men and women of the color guard are poised officers who take their assignments seriously, representing the department. Membership requires devotion, dedication, and commitment. Each event presents an opportunity for members to represent the department with pride and dignity.

Lauren Moses is the Natural Resources Police Public Information Officer in the Office of Communications. Article appears in Vol. 24, No. 4 of the Maryland Natural Resource magazine, fall 2021.