This significant conservation success is the result of a multi-year partnership between the Maryland Department of Natural Resources (DNR), The Conservation Fund (TCF), Harford Land Trust, and Aberdeen Proving Ground.

The property, now known as the Grays Run Tract of Stoney Demonstration Forest, sits between Creswell and Aberdeen with I-95 to the southeast and Carsins Run Road to the northwest. It will be managed by the Maryland Forest Service along with the existing 318-acre James Run Tract of Stoney Demonstration Forest, off Nova Scotia Road.

Altogether, it’s an impressive tract of woodland preserved along the busy I-95 corridor that will remain undeveloped. But for de-cades, development is exactly what was intended for that property. The story of how this property was was preserved as forest land for future generations is one of perseverance and above all, teamwork.

A Simple Task
In 2018, the Maryland Department of Natural Resources reached out to my office at The Conservation Fund with a simple request and directive: “Bill, there are 1,000 acres on I-95 in Harford County. Why don’t you look into it?”

At the time, I had no concept of the incredibly difficult path that lay ahead. The Hollywood One project—named after the limited liability corporation that had once owned the property—would prove to be the most challenging project of my career, full of legal and other twists and turns, including a global pandemic.

The project also provided valuable lessons on how truly fortunate we are in Maryland to have Program Open Space, the innovative program that conserves state and local parks, preserves agricultural and natural lands, protects historic sites, promotes heritage tourism, and provides playgrounds, ball fields, and other recreational opportunities for the benefit of all Maryland residents and visitors.

Program Open Space would provide the funds to protect the property as an addition to the existing Stoney Demonstration For-est. The process of preserving Hollywood One would require the persistence and collaboration of several partners, including DNR, TCF, Hartford Land Trust, Aberdeen Proving Ground, and a very generous and knowledgeable bankruptcy attorney, Bruce Henry of the law firm Henry and O’Donnell. The partners would have to lock arms and work as a team perhaps like never before–and we did just that. The Hollywood Story
Developer Victor Posner purchased the property in the late 1970s to add to his vast real estate holdings. Posner, originally from Baltimore, at one time claimed himself the largest home builder in Maryland. His self-described motto was, “I buy by the mile and sell by the inch.” Following his death in 2002, the property was managed by a Florida-based business associate who also intended to purchase and develop the property. Eventually the ownership entity, Hollywood One LLC, filed for bankruptcy protection in 2018.

In late 2018, TCF found itself holding rights to access the property obtained from the bankruptcy trustee while the property itself was being marketed on behalf of the bankruptcy estate by a global commercial real estate company. This generally is not good in the world of conservation and public funding, as brokered land adds competition to an already unique process. We simply are not as nimble as “real world” commercial buyers with our necessary processes and approvals. However, in the case of Hollywood One, these commercial marketing efforts proved an advantage. The project was being marketed as an “ideal land opportunity for development” in what was characterized by the brokers as a pro-development location with a history of fast-tracking approvals for industrial development. While that description led to a lot of interest from potential commercial buyers, that interest quickly waned once those buyers realized the difficult road to acquisition and development for these unique lands.

Stalking Horse?
After the commercial broker’s nearly year-long marketing effort yielded no results, the bankruptcy trustee decided to sell Hollywood One via a “stalking horse” auction—an auction encouraging offers on a bankruptcy asset by guaranteeing benefits to the prevailing “stalking horse” bidder, like reimbursement of transaction costs. It’s a process known to few outside of the bankruptcy world, and certainly new to those of us working on the project—which led us to call on the bankruptcy attorney, Henry, for his assistance.

We realized that even though TCF was the buyer, we’d need project promotion and local government navigation by Harford Land Trust, who have connections with neighboring Aberdeen Proving Ground. With DNR’s Program Open Space funding at the ready, TCF just needed to prevail as the successful bidder at the auction, which was being held in Miami. Mossy stream on the property

A World Upside Down
In January 2020, TCF took its shot at the stalking horse auction and was qualified as a bidder. Sadly, we were not the highest bid and the role of stalking horse bidder went to a private real estate investor, who turned out to be my best friend from high school! A subsequent live, face-to-face auction was scheduled for the first week of March 2020 just before the pandemic-related shutdowns began.

My high school pal the “stalking horse” didn’t show at the auction, but Posner’s former business partner did, and had cobbled together another group of investors to purchase the property. That group won the auction and went to contract. I came home temporarily defeated, but with the sneaking suspicion that the emergent pandemic meant things could change.

And change they did. The economic uncertainty resulting from COVID-19 caused the contract buyer’s funding to dry up. TCF picked up the contract, and we were in business!

Next we needed to appear before the Maryland Board of Public Works to receive approval to access Program Open Space funding. Our transaction was scheduled to appear before the Board on May 6, 2020. But the economic uncertainty of COVID-19 in the private sector also affected the public sector. Just one month earlier, the governor announced a statewide budget and hiring freeze in response. To qualify as a purchaser at the bankruptcy proceeding, TCF had to remove the contract contingency requiring Board of Public Works approval which put TCF at greater financial risk. We were sweating bullets, but with the local support generated by Harford Land Trust and the support of DNR itself, we received our approval. 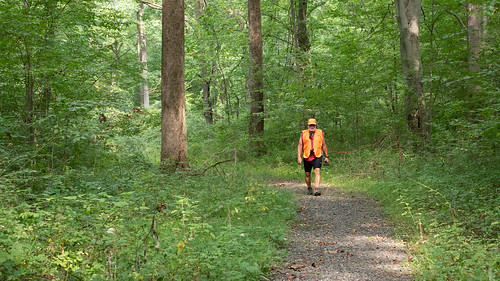 Hiking the trails at Stoney Demonstration Forest. Wearing fluorescent colors like this hiker in blaze orange is always recommended, especially in hunting season.

Final Pieces in Place
A pitfall remained at the property itself before it could be transferred to the state. For the rest of 2020, we needed to resolve three complicated boundary line disputes at the request of DNR. One of the values land trusts bring to the table is the ability to better address issues while the property is in private hands and before state money is committed. Overcoming these obstacles was challenging, particularly when dealing with landowners who may or may not trust you and the added difficulty of the pandemic and teleworking. We were all in uncharted waters for sure.

After numerous visits to landowners despite the pandemic, the team finally reached an agreement with all three landowners and we proceeded to close with DNR. Again, Harford Land Trust helped navigate the complexities of obtaining the required local approvals.

The team that protected Hollywood One was exemplary. The Harford Land Trust navigated local politics, counsel, and surveyors while steadfastly supporting the protection effort. Maryland DNR provided the Open Space funding and its expertise as to the ultimate conservation “home” for the property. Aberdeen Proving Ground stepped in with support and resources to rectify several maintenance issues on the property. The Conservation Fund provided acquisition funding, bankruptcy counsel, and top-notch in-house and outside legal expertise to the table. The result was approximately 1,000 acres in protected and conserved lands—ultimately fulfilling that “simple directive” in a phone call three years earlier.

Bill Crouch is the Maryland State Director for The Conservation Fund. Article appears in Vol. 24, No. 4 of the Maryland Natural Resource magazine, fall 2021.