From the Field: Melissa Acuti, Chief of Interpretation for the Park Service It’s hard to find a bigger fan of Maryland’s state parks than Ranger Melissa Acuti. As Chief of Interpretation with the Maryland Park Service, she creates and supports statewide park-based programs like First Day Hikes, Junior Rangers, Scales & Tales, Es Mi Parque, and Park Quest. Anyone who has participated in any of these programs has enjoyed some of Melissa’s handiwork and passion first-hand. Melissa was even a Maryland Junior Ranger herself as a youngster!

Melissa got her start with the Park Service during college, pairing her studies in biology with an internship and several stints as a seasonal naturalist at Point Lookout State Park at the southern tip of Maryland’s western shore, where the Chesapeake Bay and Potomac River meet. After college, she worked for both federal and county parks and completed a master’s degree in environmental biology. When a full-time ranger and assistant manager position opened up at her beloved Point Lookout State Park in 2010, Melissa eagerly took the job.

“I was fortunate enough to live onsite at Point Lookout State park, which I wouldn’t trade for anything,” she says. Although she sometimes had people knocking on the door of her living quarters looking for the nearest bathrooms, the beautiful Potomac River sunsets and Chesapeake Bay sunrises were two perks of the job. Another of her favorite natural events was the annual monarch butterfly fall migration through Point Lookout, and her enthusiasm for the butterflies spurred the Park Service to begin participating in a citizen-science monarch-tagging project to track the migration. Always the interpretive expert, Melissa urges monarch lovers to visit Point Lookout during the end of September or early October to see the phenomenon. “The best days are after a strong cold front has come through with northerly winds helping to push the butterflies south,” she says. Lucky visitors will spot the butterflies perched in trees in the evening, resting before a long, arduous flight over the water. 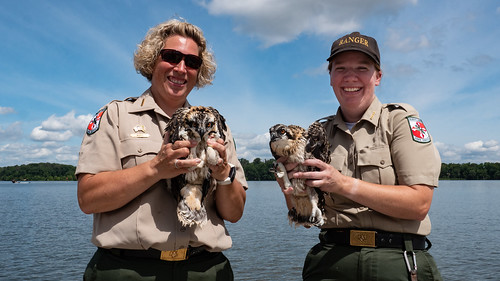 In 2016, Melissa began working at the Maryland Park Service headquarters in Annapolis to lead the Maryland Conservation Corps, the park system’s award-winning AmeriCorps program for young adults aged 17-25. She also assisted with the Conservation Jobs Corps summer program for high school students. “I highly recommend the MCC program for young people looking to gain experience in order to get into the field,” says Melissa. “I wish I would have known about the program myself when I was that age. Many of our graduates are now park rangers—and great coworkers!”

In 2017, Melissa stepped into her current role as Chief of Interpretation. With so many education and outreach programs under her purview, she always has quite a few balls in the air at any given time. But she feels lucky to work in the places most people visit for recreation or vacations. “One of the job perks is being able to spend time at any of our 75 state parks,” she says.

During the COVID-19 pandemic, the Park Service adapted much of their programming to be virtual. Rangers across the state rose to the challenge and created “Virtual Ranger Experiences,” short educational video clips about park topics. Melissa got in on the action, filming several videos about pollinators and native plants from her own backyard. She also led the launching of a popular new program during the pandemic—the Create Your Own State Park program, which encourages Marylanders to turn their own home or backyard into a “state park.”

Whether planning park programs or tagging monarchs, Melissa strives to make Maryland’s parks sources of education and inspiration for all visitors. Check out the Maryland Park Service website to learn more about interpretive programming.

Annalise Kenney is the Publications and Design Manager for the Department of Natural Resources. Article appears in Vol. 24, No. 4 of the Maryland Natural Resource magazine, fall 2021.