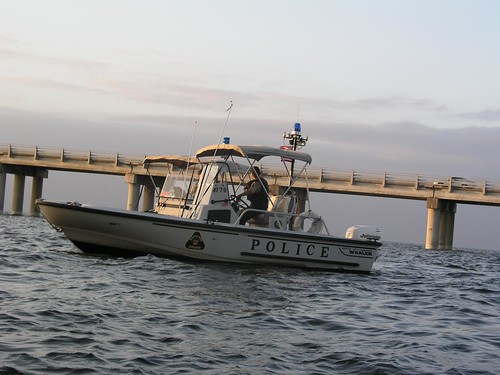 NRP charged a Hanover man with trespassing and hunting on private land without permission. On Sept. 10, police were conducting patrol in the Elkridge Landing Road area of Anne Arundel County when they observed Wyatt Bauman, 25, in a tree stand with archery equipment. Police quickly learned that Bauman did not possess written permission to hunt on the private property. According to police, Bauman had failed to report a deer that he harvested in September 2020, and illegally hunted deer on private property that year also. Police cited Bauman twice for hunting without written permission and for failing to check in a deer within 24 hours. He faces fines of up to $3,000. Police seized the remnants of the harvested deer.

Police charged a Middle River man for impaired boating in Baltimore County on Sept 3. Officers on night patrol in Frog Mortar Creek stopped a boat traveling without its required 360 navigational lights and conducted a safety inspection. Police say the operator, Charles Sanza, had difficulty producing any safety equipment on his vessel. Officers said they detected an odor of alcohol coming from Sanza and that he had bloodshot eyes and difficulty standing; Sanza reportedly admitted to consuming five alcoholic beverages before operating the vessel. After conducting a field sobriety test, police issued Sanza two citations for negligent operation, three safety violations, and a citation for operating while under the influence of alcohol. Sanza faces up to $890 in fines and is scheduled to appear in court at a later date.

Police conducting commercial seafood inspections in Manchester, Carroll County, on Sept. 4 cited a roadside seafood seller for health and other violations. John Wentz, 59, of Pennsylvania, told police that he was selling one bushel of male hard crabs and one-half bushel of oysters sitting in a wooden basket. Police noted that neither were stored in a cooler or refrigerated area, which violates ordinances of the Maryland Department of Health and the National Shellfish Sanitation Program, a federal-state cooperative program. Wentz also failed to tag the oysters and did not know where they were obtained. Officers charged Wentz and seized the oysters. Wentz faces up to $2,000 in fines and is scheduled to appear in court at a later date.

Police charged three individuals for possessing live snakeheads and illegal gear in Dorchester County. On September 5, officers responded to Little Blackwater River after receiving a tip that three people were camping on federal property. When police arrived, they were met with three fishermen who admitted to harvesting multiple live northern snakeheads and catfish using bank poles, which are illegal in Maryland’s tidal waters. Police found and seized 61 snakeheads and 245 bank poles with lines and hooks. Officers charged Jason Ngo Tran, 29, of Tennessee; Khoi Ky Tran, 54, of Silver Spring; and Dinh Hanh Ho, 55 of Laurel, with three citations each for: failing to kill an invasive snakehead upon possession, catching fish with illegal gear, and failing to use circle hooks while fishing in the Chesapeake Bay and tidal tributaries. They face up to $3,000 in fines. Tran was issued an additional charge for possessing a firearm on federal property. All three are scheduled to appear in court at a later date.

Police charged three Baltimore men with poaching striped bass at Kent Narrows in Queen Anne’s County as part of an ongoing effort by officers to target illegal fishing. Officers on patrol September 19 observed Oscar Ramirez-Pena, 35; Díaz Montecinos Isauro-Misael, 24; and Perez Morales Luciano, 44; fishing under a bridge marked “No Trespassing.” During their investigation, police located a five-gallon bucket containing 24 undersized striped bass, which the men later admitted to harvesting. Police charged all three men with illegally possessing striped bass, fishing without required registration, and violating time restrictions of possessing striped bass while fishing. They each face fines up to $3,000 and will appear in court at a later date. The fish were returned to state waters.