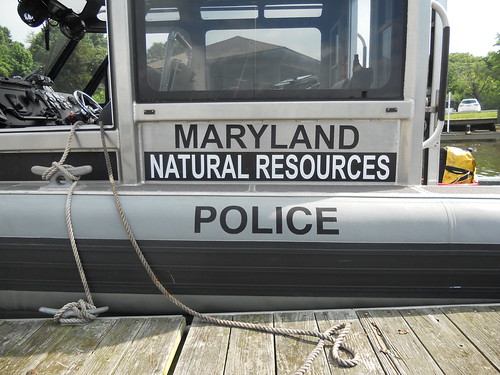 The Maryland Natural Resources Police (NRP) recently charged several individuals throughout the state for illegal activities including impaired boating, having a concealed machete, illegally harvesting striped bass during the season closure, and other violations.

NRP in Baltimore County arrested an Essex man for drunken boating and speeding July 3 on the Middle River. While on midnight patrol, police spotted a vessel exceeding the 6-knot speed limit in place on weekends during boating season. Officers stopped the boat to speak with the operator, Cole Ostendarp, 24, who had bloodshot eyes and slurred speech. Ostendarp admitted to police that he consumed five alcoholic beverages before operating his vessel. After taking a standard sobriety test, Ostendarp received two citations for negligent operation, four citations for impaired operation, and one citation for exceeding 6 knots. He faces up to $2,500 in fines and 14 months in jail.

Two Delaware men were charged with illegally harvesting undersized striped bass following a vehicle stop July 3 in Dorchester County. Officers on road patrol stopped a car that was speeding, and during the stop observed several fishing poles in the vehicle. When asked by police, the car’s two occupants confirmed they had harvested fish in their car, and consented to a search of the vehicle. Police found 15 undersized striped bass, and issued citations to Jose Luis Landeros-Valenzuel, 36, and Geronimo Silvar Ocampo, 31, for possessing undersized striped bass. Ocampo was issued an additional charge for fishing without a license. Landeros-Valenzuel faces up to $3,000 in fines and Ocampo faces up to $4,000 in fines.

Police charged a Silver Spring man for impaired boating in Garrett County on July 24. Officers on patrol at Deep Creek Lake observed a man standing on the back deck of a pontoon boat, outside the boat’s gate, and suspected he might be under the influence. Upon approaching the boat, police twice instructed boat operator Parth Patel, 29, to place the boat in neutral gear. Both times, Patel brought it to a slower speed and once put it in reverse. Officers escorted him back to shore and administered a field sobriety test. After obtaining the results, police issued Patel three citations for drunken boating and one citation for negligent operation. Patel faces up to $2,500 in fines and 16 months in jail.

An Abingdon man faces weapons charges after police stopped him for tossing litter out of his car window. On July 27, officers on patrol in Harford County observed a driver toss an object out of the window and onto the road. Police immediately conducted a traffic stop and identified the operator as Kyle Hawks, 30. When questioned if he had any weapons in his vehicle, Hawks admitted to having a machete tucked between the door and driver’s seat. Officers learned that Hawks was prohibited from possessing any weapons and placed him under arrest for concealing a dangerous weapon. Police also charged him with littering and failing to display a driver’s license, and seized the machete. Hawks faces up to $1,190 in fines and three years in jail.

Officers in the Kent Narrows area of Queen Anne’s County charged three Annapolis residents with poaching striped bass during the July 16-31 closure period. Shortly after midnight on July 25, officers observed three fishermen harvesting striped bass and also caught one of the fishermen transporting the fish into a vehicle. Additional fish were located hidden in the spare tire compartment in the car. Nelson Reyes-Canales, 21, and Fredy Salmeron-Canales, 32, were each issued one citation for the illegal possession of striped bass, which is a must-appear violation due to the number of fish involved. Each faces up to $1,000 in fines. Alexander Canales,18, was also cited for fishing without a license and faces up to $2,000 in fines.

Two Hyattsville men were charged with poaching striped bass in Kent Narrows as part of an ongoing effort by officers to target illegal fishing. Officers on patrol July 24 observed Ricardo Antonio Garcia, 29, and Jasson Yanes Fuentes, 22, fishing with a cast net and placing striped bass into a backpack. While searching the bag, officers located 12 striped bass. Police charged both men with illegally targeting and taking striped bass during the closed season, and fishing without a license. Each man faces up to $3,000 in fines.