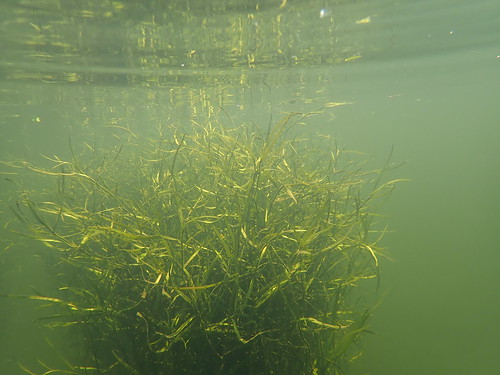 Record high rainfall and stream flows into the Chesapeake Bay in 2018 and 2019 led to higher levels of nutrient and sediment pollution, changes in salinity, and poorer water clarity in many of Maryland’s waterways. Habitat conditions remained poor in 2020, and underwater grass abundance declined 13% overall from the previous year.

After years of significant gains, more than 3,000 acres of underwater grasses were lost in the mid-Bay region, specifically the lower Chester River, Eastern Bay, the mouth of Choptank River, and the Little Choptank River. These declines were primarily in widgeon grass, a species that can rapidly increase or decrease from year to year with changes in water quality.

Some areas of Maryland’s portion of the Bay showed improvements in underwater grass abundance. The iconic beds in Tangier Sound and the Susquehanna Flats, along with those on the Potomac River, including Mattawoman and Piscataway creeks, increased in 2020.

Underwater grasses were observed in the Wicomico River on the Eastern Shore for the first time since the survey began in 1984.

“Efforts underway by Maryland and our Bay partners to reduce nutrients in our waterways remain critical to our goal of increasing submerged aquatic vegetation in the Bay,” Maryland Natural Resources Secretary Jeannie Haddaway-Riccio said. “While extreme weather has had a real impact on our state’s underwater grasses, SAV are aiding in improving water quality and do provide important habitat in many of our waterways.”

“The improvements seen in Tangier Sound and on the Susquehanna Flats highlight the resilience of Maryland’s large, stable underwater grass beds, and emphasize the importance of protecting and preserving them,” said Becky Raves Golden, Living Resource Assessment Program Manager for DNR. “Many of the losses observed in 2020 were in areas where gains had been made in recent years, suggesting that recovering populations are more affected by the stress of poorer water quality than stable, resilient beds. There is still work to do to mitigate the impacts of multiple stressors on Maryland’s recovering underwater grasses.”

Despite the overall decline in statewide underwater grass abundance, underwater grasses in all or part of four Maryland rivers surpassed their restoration goals. These included the Northeast River at 122%; the Bush River at 127%; the middle Chester River at 287%; and the tidal fresh portion of the Chester River at 16,554% (the percentage of the goal attained is so high due to a very small segment restoration goal). An additional six river segments in Maryland reached 75% or more of their restoration goals, including the northern Chesapeake Bay, the upper Chesapeake Bay, Gunpowder River, Northeast River, Mattawoman Creek, and Wicomico River.

About 17 species of underwater grasses are common throughout the Chesapeake Bay and are distributed primarily based on their salinity tolerance. Most species — more than a dozen – are found in the less salty and freshwater regions of the upper Bay and tributaries. In the moderately salty waters of the mid-Bay, only about four species of grasses are commonly observed; and in the saltiest regions of the lower bay, only widgeon grass and eelgrass are found.

Also known as submerged aquatic vegetation (SAV), underwater grasses are a critically important bay habitat that provide multiple ecosystem benefits. Underwater grasses remove nutrients and sediment from the water column, reduce shoreline erosion, provide habitat and protection for species like the blue crab and largemouth bass, and support and sustain migrating waterfowl. The loss of mid-Bay grasses could have been a contributing factor to a reduced number of juvenile blue crabs, which rely heavily on underwater grass beds for habitat and protection from predation.

The 2020 distribution of SAV in the Chesapeake Bay and its tributaries was mapped during the Baywide annual aerial survey conducted by the Virginia Institute of Marine Science, using multispectral digital photography. Images were acquired between May and October 2020, with a resolution of 24 centimeters, encompassing 193 flight lines. WorldView 2 satellite imagery, acquired from Digital Globe through the NGA NextView program, was used to augment the aerial imagery for the Anacostia River and a portion of the Potomac River near the District of Columbia.