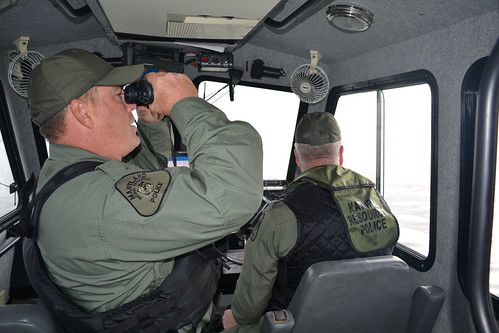 The Maryland Natural Resources Police recently charged several individuals throughout the state for illegal activities including weapons charges at a state park, operating watercraft while intoxicated, illegal fishing, and more.

A Delaware man was charged with operating a personal watercraft while intoxicated and speeding June 19 on the Bohemia River in Cecil County. Officers on boat patrol observed the watercraft exceeding the 6-knot speed limit and stopped the driver, identified as Craig Logan, 25, of Dover. Police believed Logan to be impaired by alcohol and conducted a field sobriety test, after which he was arrested and additionally charged with negligent operation of a vessel, and exceeding the 6-knot speed limit on the middle Bohemia River. He faces up to $3,000 in fines and a year and four months in jail.

NRP charged a Cecilton man for impaired driving June 11 after he nearly struck a police car head-on. Officers on patrol near the fairgrounds in Cecilton observed a car driving negligently and after nearly being struck, they conducted a traffic stop. Officers say they detected a strong odor of alcohol on the driver, Perez Gustavo, 28, and that his eyes were reportedly bloodshot and glassy. After conducting a field sobriety test, police arrested Gustavo for driving a vehicle while impaired by alcohol. Additional charges included negligent operation, failing to display a license and registration, and reckless driving. He faces up to 3 years of imprisonment and $6,500 in fines.

A Boonsboro man faces multiple charges, including operating a boat while impaired, after fleeing an NRP boat patrol on June 18. Officers patrolling the Potomac River in Frederick County spotted a vessel traveling without its required navigational lights. When police instructed the operator, Joel Weaver, 38, to dock his boat, he replied that he had too much to drink and then fled. After a brief pursuit, officers observed Weaver on Meadow Island, where he attempted to board his boat and run again. Police say they detected an odor of alcohol on Weaver, his eyes were bloodshot and glassy, and his speech was slurred. After Weaver refused to take the field sobriety test, police placed him under arrest for operating while under the influence of alcohol. Additional charges reckless operation, negligent operation, and failure to display navigation lights. He faces up to $3,270 in fines and a year and four months in jail.

Police charged a West Virginia man June 11 with bringing a loaded handgun to a Garrett County state park, after he reported leaving it in a cabin. Officers say Brent Mallek, 30, reported that he left the gun in a cabin at Herrington Manor State Park; he informed staff about it after he had left and the cabin was occupied by new residents. Park rangers safely and immediately removed the gun. Officers learned that Mallek was prohibited from possessing firearms due to a prior conviction. After confiscating the weapon, police charged Mallek with felony possession of a firearm, illegal possession of ammunition, and possession of a weapon in a state park. Mallek could face up to 16 years in prison and $1,500 in fines.

Three men were charged with violating size and creel limits for striped bass June 13 at Kent Narrows in Queen Anne’s County. Officers on boat patrol say they observed the men fishing on a vessel just north of the Kent Narrows drawbridge and conducted a conservation stop. The officers say they found a plastic bag containing nine undersized striped bass hidden in a corner of the boat. The three fishermen were identified as Jose Remberto Pereira Lizama, 40, of Hyattsville; Jose Issac Mungui Panameno, 37, of Gaithersburg; and Walter Exavier Gonzalez Rivera, 37,also of Gaithersburg. All three were charged with exceeding the striped bass possession limit, striped bass size limit, striped bass while fishing. Each man faces up to $3,000 in fines.

NRP charged two Washington County men with illegal possession of smallmouth bass after investigating a case that began in May. On May 30, police received information that Kevin Murphy, 28, and Casey Shank, 26, were in possession of seven smallmouth bass that were caught out of season. Both men later admitted to catching the bass in a creek in Washington County and using them for bait in a catfish tournament in Pennsylvania several days later  Police charged the pair on June 24 with seven counts of possessing smallmouth bass during the closed season; each man faces up to $7,000 in fines and suspension of their Maryland recreational fishing privileges.