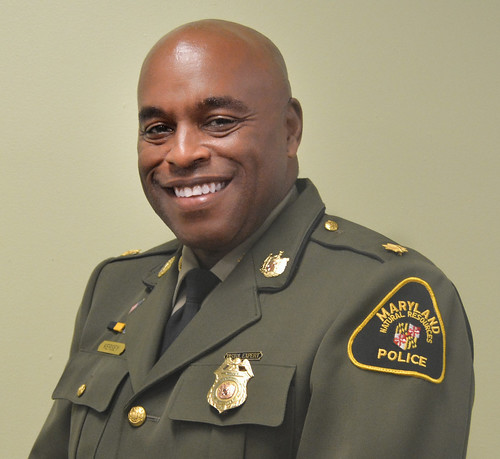 Additionally, Kersey is a graduate and member of the National Association of Conservation Law Enforcement Chiefs, a member of the NRP Black Officers Association, and is active in community outreach efforts including the popular “Shop With a Cop” program during the holiday season.

“Major Kersey’s tenure and extensive professional experience will be a great benefit to our department, especially given NRP’s unique mission of protecting both Maryland’s citizens and natural resources,” Department of Natural Resources Secretary Jeannie Haddaway-Riccio said.

“Major Kersey has my full confidence to help lead the men and women of our agency in our important conservation mission,” Col. Baker said. “He is well respected by his subordinates, peers, and others in the department and our allied agencies. Maj. Kersey is already a valued member of our leadership team and I’m proud to have him on board as deputy superintendent.”

“It is with great pride, honor, and enthusiasm that I accept this prestigious position; I thank Governor Hogan for this appointment and extend my gratitude to the Secretary and the Colonel for their support,” Kersey said. “I am committed to continuing the strong traditions of my predecessors, and to continuing to educate the public and enforcing Maryland’s laws and regulations to preserve our natural resources presently and for future generations.”

An integral part of the state’s natural resources agency, the Natural Resources Police is one of the oldest conservation law enforcement agencies in the United States, and the oldest statewide law enforcement agency in Maryland. With a dedicated staff of civilian and volunteer personnel, including reserve and retired officers, NRP is responsible for enforcing conservation and boating safety laws, protecting state parks, public lands, and waterways.