In Our Hands: Giving Local Box Turtles a Boost

During this time of year, box turtles are on the move. Why? They are looking for love and are laying eggs. These mid-sized turtles often don’t travel far from their typical homes, but they will cross roads and other obstacles to get back to their breeding grounds.

Box turtles have a high-domed shell that has a hinge on the underside. They are capable of pulling their entire bodies up into the shell if they feel threatened. The patterns on the shell and on the turtle can greatly vary by individual. Some turtles are bright orange and black while others appear to be duller in color. Some indigenous American cultures also use turtle shells as rattles and other musical instruments for ceremonies. Some of the oldest known box turtles have lived over 100 years! Most wild box turtles, however, typically live around 50 years. Researchers sometimes mark the edges of a turtle’s shell to identify individuals or attach tiny tracking devices. Because the turtle’s shell can easily be damaged, it is not recommended to mark turtles at home. However, you can take pictures of your turtle visitors and can distinguish individuals by their intricate shell patterns.

Home is Where the Heart Is

Interestingly enough, box turtles have a homing instinct that functions like an internal GPS. They can easily navigate through their home territories. However, if they are moved outside of where they live, it can cause confusion. Because of this issue, it is best not to move box turtles from where you have found them.

Box turtles are omnivores, meaning that they like to eat both plants and animals. In particular, fruit-producing plants like raspberries, blackberries, mayapples, elderberry, black cherry, persimmon, pokeweed, and the like are often appetizing to roaming turtles. Significantly, box turtles are very important for mayapples and serve as the main seed dispersers for this plant. In addition, mushrooms, insects, and worms provide extra nutrition for the box turtle. 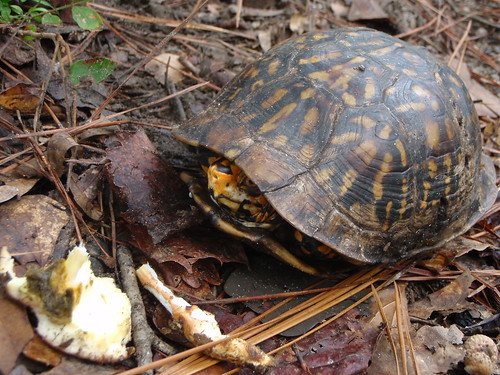 Box Turtles on the Decline

Unfortunately, box turtles have been declining in Maryland and in other states over the last decade. These declines are due to habitat loss, diseases (like Ranavirus), and illegal collection. The good news is that there are simple steps to help box turtles out in your own backyard or in your neighborhood!

How to Help Box Turtles in Your Backyard

For more information on local turtles in Maryland, check out our website here.

Wow! What an emergence for Brood X! While I enjoyed the periodical cicadas for the most part, I am happy to have a bit of reprieve from the noise.

In addition to Brood X, we also have been receiving reports of sick birds around the region. Since the initial reports in May, the reports have come in from Maryland, Washington, D.C., Virginia, Pennsylvania, Ohio, and Kentucky. At this time, not much is known and we are suggesting people temporarily cease feeding birds until more is known about the causative agent and how it spreads. Please see the USGS Interagency statement for more information. For Maryland residents, if you encounter sick or dead birds, please contact the DNR/USDA Wildlife Services hotline (877-463-6497) or (410-349-8130) for those with numbers outside of Maryland. If you must remove dead birds, place them in a sealable plastic bag to dispose of with household trash. Additional information will be shared as diagnostic results are received.

This issue is a bit bittersweet. After almost ten years of writing for HabiChat and running the Wild Acres program, I will be heading out to work on new initiatives. I have very much enjoyed working with backyard wildlife habitat enthusiasts across Maryland and hope you continue to work on creating wildlife friendly spaces! The Wild Acres program and HabiChat newsletter will still be available.

In this summer issue, learn a little more about the beautiful and often overlooked rosy maple moth as well as other royal silkworms in Maryland. In addition, black walnut is our native plant featured this month. This species supports several species of royal silkworm moths as well as more than 100 other butterfly and moth species. With the summer heat and rains, our wild turtles are also on the move, so you can read about how to give local box turtles a boost in your backyard.