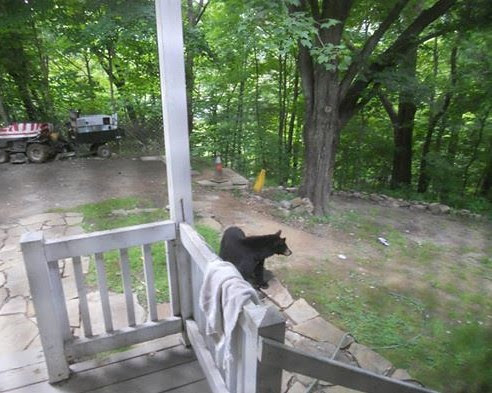 Throughout June and July, visitors and residents of Maryland’s bear country may encounter more bear sightings than they would at other times of the year. The Maryland Department of Natural Resources (DNR) is receiving active reports of bears in suburban counties, which is a normal occurrence and no cause for concern.

This time of year, juvenile bears continue to disperse — seek out a territory of their own — and may travel throughout Maryland’s suburban areas. Young male bears have been documented traveling more than 100 miles in search of a suitable habitat that includes the presence of other bears.

At the same time, adult black bears are also increasing their movements in search of mates during the breeding season, which will continue through the end of July. During the breeding season, both male and female black bears may travel well beyond their normal home ranges to seek a mate. These large and usually wary bears may throw caution to the wind and travel into areas where people can catch a glimpse.

So while bears are most common in Maryland’s four westernmost counties – Allegany, Frederick, Garrett, and Washington — it is not uncommon to see them in central and southern Maryland. DNR recommends that residents be proactive and exercise good judgment to avoid creating man-made attractions for bears as they move about the landscape.

For those who live in bear country or in any area where a bear has been spotted recently, DNR advises:

“Keeping bears wild is a community effort that benefits bears and people,” said Wildlife and Heritage Service Director Paul Peditto. “Being aware that bears are on the move and limiting the human foods available to them will help to keep Maryland’s bears wild.”