Maryland’s Wild Turtles Are on the Move

Help Turtles Cross the Road, But Keep them Wild 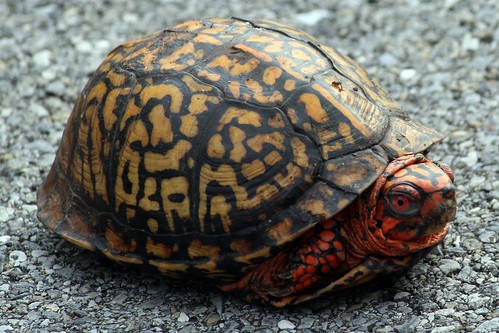 Eastern box turtles are among those commonly found crossing – or sitting on – Maryland’s roads. Photo by Ranger Elena Gilroy/Maryland Department of Natura Resources.

Wild turtles are currently heading to their breeding and nesting sites throughout Maryland. During this time of year, wild turtles can often be seen crossing roads and the Maryland Department of Natural Resources urges drivers to be cautious and give turtles a “brake.”

If a passerby wants to help a turtle cross the road, they should check for traffic and move the turtle in the direction it was traveling, until it is safely out of vehicle lanes. The turtle should never be returned to the side it started from or taken far away from where it is found. Turtles have specific home ranges and moving them too far away can cause more harm than good. All Maryland turtle species lay their eggs on land, so moving a gravid — or pregnant — female to water can impact her ability to lay eggs.

Handling turtles should be done with caution. Extra care should be taken with snapping turtles, which can inflict a serious bite. The animal should only be picked up gently at the back of the shell using two hands, with your thumbs on the top of the turtle’s shell and other fingers supporting the underside of the shell. Handle the turtle only as long as needed to get it to safety.

While it may be tempting to take a wild turtle home, it is important for both the well-being of wildlife and people to keep wildlife wild. Like all animals in the wild, turtles can carry diseases and parasites. Turtles also can live a long time and often need specialized care. They also need large areas to roam, something that cannot be provided in captivity.

To protect turtles, the law prohibits the removal of some species from the wild. It is also illegal to possess any turtle under four-inches in length. Reptiles that have been bred in captivity, or which are not native to Maryland, may not be released into the wild. Releasing captive and nonnative turtles may spread disease and parasites to the wild population. Only individual animals that were taken from the wild may be released back into the wild, and only if:

People who are interested in keeping a turtle as a pet can obtain more information from the Mid-Atlantic Turtle and Tortoise Society, which provides opportunities to adopt turtles and tortoises that cannot be released into the wild

More information about permits for captive reptiles and conditions for release into the wild, as well as species lists, is available online.