Tracking the Blue Cat: Learning to Beat the Invasive Fish 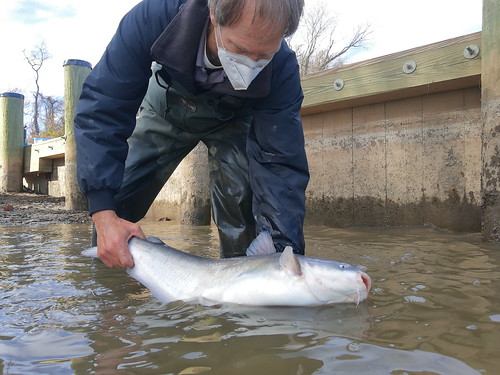 Hidden below the surface of the calm waters of the Patuxent River lies a vast ecosystem. Over time, this aquatic environment has gradually changed, ebbing and flowing like the tide. However, along with natural change, this fragile ecosystem has been disturbed by human activity, very notably within the past century by the arrival and proliferation of invasive species.

The blue catfish (Ictalurus furcatus) was introduced in Virginia decades ago to provide an exciting angling experience to East Coast anglers. As an unexpected consequence, the species thrived in the Chesapeake Bay watershed and expanded into Maryland’s tidal waters and tributaries. The blue catfish has today become more of a nuisance than a trophy catch.

With a ferocious appetite, blue catfish will indiscriminately and opportunistically eat anything. To better understand their impact on the local ecosystem, the department’s Fishing and Boating Services is taking a close look inside the belly of the beast, asking exactly what species blue catfish consume in the course of their scavenging.

Examining the blue catfish’s stomach contents will give biologists a better understanding of the fish’s diet. Even more, biologists are curious whether the blue catfish is consuming some of our native aquatic life like blue crabs, striped bass, American shad, and yellow perch.

In addition to studying catfish’s stomachs, scientists have new technology at their disposal to track and tag blue catfish throughout the Patuxent River watershed. This tracking technology will give biologists the fullest view yet of this species’ lifestyle, habitat, and migration patterns.

Lonely fisherman on the Patuxent River by Terry Thomas

Starting in the fall of 2020, biologists began tagging blue catfish using both radio and acoustic transmitters. Acoustic tags function well in deep, brackish water like the Chesapeake Bay and river mouths, while radio tags are especially useful in shallow water with thick vegetation, such as upper Patuxent River habitats. For the Patuxent River study, biologists used a combination radio/acoustic tag that should function well throughout the entire study area. 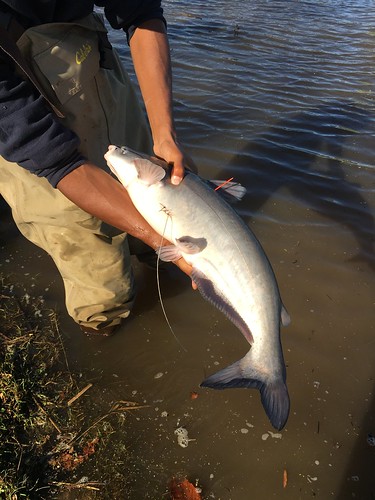 These transmitters are small. They weigh less than an ounce and are roughly the size of a standard AA battery. Each transmitter is surgically implanted in the fish’s stomach cavity. To help identify each fish, biologists also implanted an external streamer just below the back portion of the dorsal fin. Each tag has a unique fish identification number, instructions, and a contact phone number. After each tag is implanted, the fish are released back into the water, ready to be monitored. 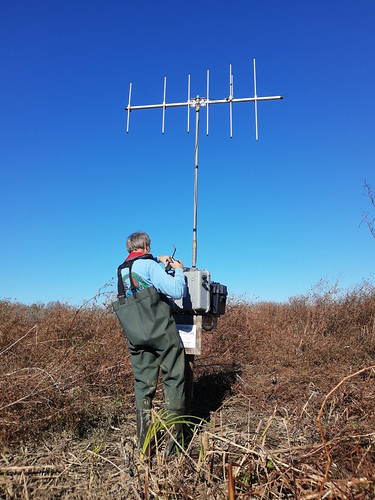 To help aid in tracking the movement of blue catfish, 10 stationary radio receivers along the upper Patuxent River log the movement of blue catfish when they swim by. Due to the importance of the study, biologists are encouraging anglers in the Patuxent River who happen to capture a tagged blue catfish to report the tag number, call the phone number listed on the tag, and release the fish immediately back into the water. Like the radio transmitters, anglers’ reports are an important element in helping biologists gain an understanding of these fish.

These tracking and tagging efforts are expected to last a few years. At that point, the data will be analyzed to determine where populations of blue catfish are thriving and how they are affecting the environment. Ultimately, survey results will provide guidance for both recreational and commercial anglers who can use this information to harvest blue catfish.

While it may be too early to determine the lasting impacts of blue catfish in Maryland waters, continuing studies like these are an important first step in keeping tabs on our ecosystems.

Eric G. Wilson is a public affairs officer for DNR’s Fishing and Boating Services. Article appears in Vol. 24, No. 2 of the Maryland Natural Resource magazine, spring 2021.