As boat building becomes a dying art, I was recently thinking about my ancestors, all of whom worked in some way with forestry, fisheries, or both. My mother’s father worked on the water as a commercial fisherman, was a farmer, cut pulpwood in his younger years, and built boats in his later years. My father’s family were farmers and sawmill workers and owners.

Our forests’ historical ties to working the water and managing the land go back even further than my family’s European roots. Before European settlers arrived on these shores, my Native American ancestors were maintaining forest health by use of fire, as well as cutting trees for poles to hang nets from for catching fish. Larger trees were cut, then hollowed out by burning and scraping the center, to make a “dugout” canoe. This canoe was not only used for fishing but also as a means of travel to other villages. When the Europeans arrived, they saw the vast reserves of oak, which were eventually harvested and sent to New England for the shipbuilding industry there.

The Europeans learned from the Native Americans how to fashion pound nets or “weirs” to catch fish, a practice that is still used to this day by commercial fishermen. Pine trees with a 6-inch to 8-inch top that can range in length from 24 feet to 36 feet in length are cut, knotted (de-limbed to a point of stability), and pointed. This harvested forestry product is then taken to a waterway and placed in the bottom, with nets hung from them to funnel and corral the fish in the “pound,” hence the term “pound net. 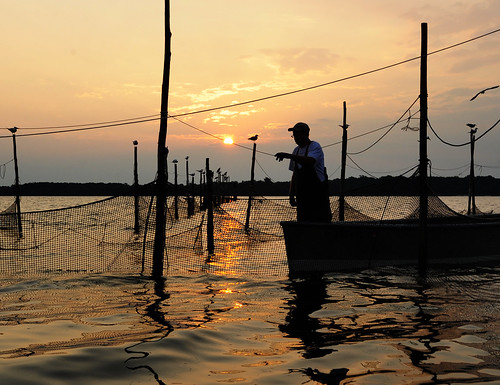 The Europeans also refined the dugout canoe and developed sailing log canoes by hewing and fastening several logs together, leading to development of the patent stern bugeye. This sailboat had a sharp bow and stern, made up of eight or nine logs hewn and fastened together to form the hull. The rest of vessel, which was usually double-masted, was built up from that. The “patent” stern was a squared-off area built out over the actual stern of the boat. These sailing vessels were used for not only oystering in the winter but hauling crops and lumber to the Baltimore and Annapolis markets in the summer.

Vessels of Timber
Forests provided materials for the many schooners that were built for the lumber and freight trade between Maryland and the Caribbean. With a need for a cheaper, reliable vessel for the oyster harvest, the well-known skipjack—the state boat of Maryland—was developed in Dorchester County. This lower Eastern Shore area has a rich history of shipbuilding, with some of the finest craft on the Chesapeake Bay built here with timber and lumber from local forests. The skipjack is a two-sail vessel with a shallow draft, allowing it to harvest oysters from the more shallow waters that the larger bugeyes and schooners could not get. Once numbering in the hundreds, there are only a handful of skipjacks left and still working today.

With the advent of the internal combustion engine, the builders went from crafting sailing vessels to harnessing power. As with the sailing vessels, these workboats started with a pine keelson (or backbone), white oak stems, and transoms with pine ribs, which had white oak knees added for strength and rigidity. The sides were pine or, in some cases, white cedar sourced either from New Jersey or North Carolina.

Many local builders like my grandfather had timber reserves on their family property, just for building boats—trees with the right curvature for the keelson and old growth pine from which to get lumber. The tree that was to be the keelson was taken to the shop and shaped. The old-growth trees were cut and either milled into lumber onsite or sent to local mills like the former Spicer Lumber in Golden Hill. Though no longer in business, Spicer provided keelsons and lumber for the constructions of boats throughout the Delmarva peninsula. Before closing at the beginning of this century, Spicer’s mill also supplied lumber for the upkeep of the floating fleet at the Chesapeake Bay Maritime Museum in St. Michael’s. Dorchester County boasted the last wooden barrel factory in the country until it closed in the early 2000s. The stave and shook mills were in operation well into the 20th century, when the cardboard box overtook the market for barrels and wooden boxes. Even so, local forests continued to provide raw material for the cardboard and paper.

A Symbiotic Relationship
Centuries later, forestry products, fisheries, and the bay are still intertwined. Harvesting trees to support the seafood industry has allowed the timber industry to support and manage our forests and promote forest health, which also provides the benefit of clean water, contributing to a healthy bay. In turn, healthy water promotes the growth and strength of our seafood industry. It is important from both an economic and environmental standpoint that these two industries continue and thrive.

Tom Bradshaw is the Forest Industry Development Specialist for the Maryland Department of Natural Resources Forest Service in Salisbury, Maryland. He can be contacted at thomas.bradshaw@maryland.gov. Article appears in Vol. 24, No. 2 of the Maryland Natural Resource magazine, spring 2021.