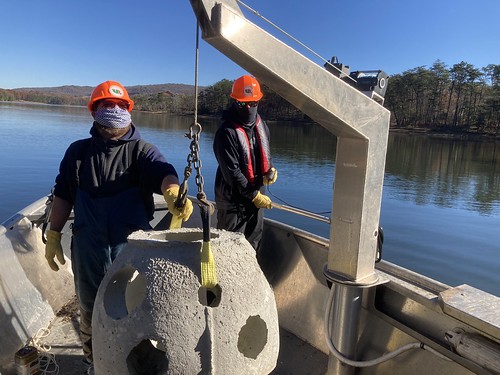 Habitat and water quality are the two pillars upon which healthy fish populations are built. If either becomes unsuitable, the foundation of the system is unstable, causing fish populations to tumble. Many people are familiar with the importance of clean, well-oxygenated water for fish, but an abundance of quality habitat is just as crucial.

Most fish require different habitats throughout their lives, and sometimes habitat needs change with the seasons. Largemouth bass, Maryland’s most popular freshwater sportfish, and many other popular sportfish like black crappie, bluegill, chain pickerel, smallmouth bass, and walleye prefer areas with physical structure most of the year. Put simply, they like a roof over their heads. Physical structure in freshwater environments may include both natural and manmade structures, such as fallen trees, submerged aquatic vegetation (SAV), boat docks, bridges, and rock piles. Physical habitat can change or degrade over time, and needs to be replaced through natural processes or by human intervention.

Staff actively design, construct, and deploy a variety of structures into our lakes to improve the physical habitat available to fish and attract fish for anglers. Most often these structures are made of wood. For example, recycled Christmas trees are wired into bundles and deployed at varying depths. These habitat improvement activities are funded through Sportfish Restoration Funds, which is federal money derived from excise taxes on fishing tackle, boats, and boat fuel and distributed to the states for fisheries management activities. 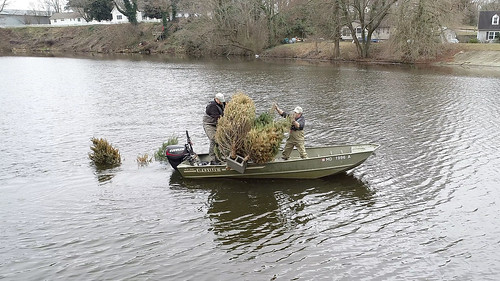 Concrete reef balls for habitat have been used for many years in the Chesapeake Bay and Atlantic Ocean. In November 2020, the department began the freshwater initiative with 50 reef balls delivered to Rocky Gap State Park and deployed in Lake Habeeb. The structures were placed in seven popular fishing locations around the lake. The project used “mini-bay” reef balls that are approximately two times the size of a normal bushel basket and weigh about 300 pounds each. The structures were maneuvered and loaded using heavy equipment operated by Rocky Gap State Park staff. The structures were deployed using a buoy-tending boat captained by Hydrographic Operations staff within Fishing and Boating Services. Additional deployments into Hunting Creek Lake and Blairs Valley Lake will occur in the spring of 2021. When completed, similar maps to the Maryland Artificial Reef Initiative will be available to anglers on Freshwater Fisheries’ website.

Additionally, several reef ball “molds” were purchased as a partnership between Freshwater Fisheries and the Maryland Park Service through grants from the State Lakes Protection and Restoration Fund. The molds will allow staff to build and deploy large numbers of reef balls into Deep Creek Lake, St. Mary’s Lake, and other impoundments in perpetuity. Although heavy and cumbersome, concrete reef balls do not degrade like wood structures and resist the impacts of siltation due to their height. They should provide good juvenile and adult fish habitat for dozens of years into the future.

Brett Coakley is the eastern regional manager for the department’s Freshwater Fisheries Program. Article appears in Vol. 24, No. 2 of the Maryland Natural Resource magazine, spring 2021.