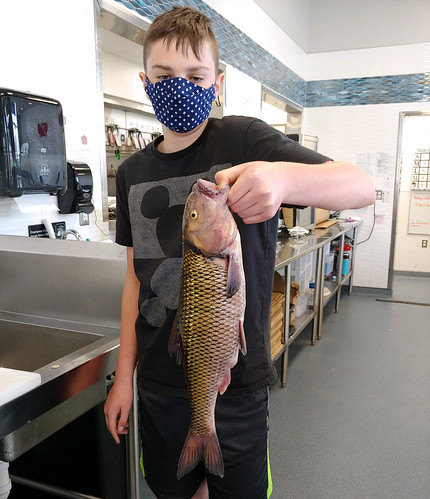 A Harford County youth angler has officially been recognized by the Maryland Department of Natural Resources as a new state record holder for fallfish in the nontidal division. Maxwell Diegel caught the 2.14-pound fallfish — Semotilus corporalis — on April 19 while fishing in Broad Creek, his local stream.

The 13-year-old angler was fishing from shore with corn and worms when he hooked his record catch.

“I knew I had something big when the rod bent in half,” said Diegel.

Diegel’s catch broke the previous state record fallfish of 2.07 pounds by Adam Aghion in 2019. The fallfish weight was officially certified by Ashley Reimer of Conrad’s Crabs and Seafood in Bel Air. A Maryland Department of Natural Resources biologist confirmed the catch.

After Diegel realized he had a new state record, he “danced around and did a celebration,” and said the catch even led to a summer job opportunity at the seafood market that weighed the fish.