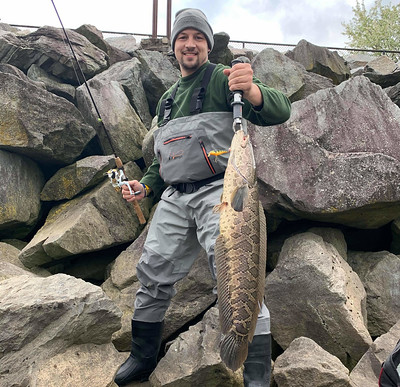 There are a lot of exciting fishing opportunities in Maryland right now — the trout stocking crews are busy stocking trout in the put and take areas, hickory shad runs are underway, and warming waters have many fish species active.

A reminder to anglers that all fishing for striped bass, including catch-and-release, is prohibited in the Chesapeake Bay or any of its tidal rivers — except the main stem of the Potomac River — for the month of April. The main stem of the bay will open to striped bass fishing on May 1 south of the Brewerton Channel.

Please join us on April 29 at noon for a Maryland Fishing Roundtable webinar with guest biologist Jim Thompson of the Maryland Department of Natural Resources fish passage program. We will discuss the efforts to encourage anadromous fish populations to reach their spawning grounds via fish ladders and dam removals. Details for joining the webinar are on the department’s online calendar.

Moderate and windy conditions for the upcoming week will continue the slow warming of bay waters for gamefish, including the white perch spawning or the shad run going on the next couple of weeks in Maryland lower salinity waters. Bay surface water temperatures are approaching the upper 50s, although smaller streams and downwind areas will warm faster on a sunny day and can hold temperatures in the upper 50s and low 60s.  In addition, the main bay still has slightly warmer bottom waters, so anglers may want to scan these areas for other gamefish.

Expect average flows for most Maryland rivers and streams. There will be above average tidal currents Friday through Tuesday as a result of the upcoming full moon on April 27. Expect average clarity for the bay and rivers. To see the latest water clarity conditions, check Eyes on the Bay Satellite Maps. 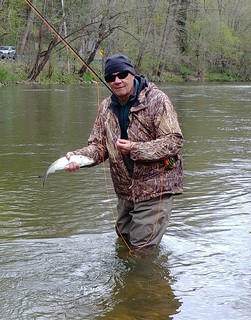 Joe Evans holds up an Octoraro hickory shad for a quick picture before releasing it. Photo by Tom Parham

The flows from the Conowingo Dam continue to be very low, causing occasional low water levels and moderate flow conditions in the lower Susquehanna River. The hickory shad are beginning to show up and anglers are enjoying good catch-and-release fishing opportunities at Octoraro Creek. Deer Creek has been quiet but the action should start there shortly as water temperatures keep warming. Anglers fishing with spinning gear are having good success by casting shad darts and small flashy spoons. Those fly fishing are using colorful flies and enjoying the action.

Fishing for a mix of channel and blue catfish is high on the list of many anglers in the lower Susquehanna River and surrounding tidal rivers of the upper bay. The channel catfish can be found in every tidal river; blue catfish are thick in the lower Susquehanna and Chester rivers and can show up in many of the other tidal rivers at any time. Fresh cut gizzard shad, white perch, or bluegill sunfish are popular baits, and if you can obtain fresh menhaden they work well also. Frozen fish often does not do too well, but clam snouts and chicken liver can be good baits at times. Nightcrawlers and bloodworms are enticing to catfish but marauding white perch will make short work of those baits.

White perch can be found in the middle to lower sections of the region’s tidal rivers, and most anglers are using bottom rigs baited with bloodworms or grass shrimp with good results. The white perch are entering the lower Susquehanna River this week and their numbers will increase in the near future. Casting small jigs and shad darts tipped with grass shrimp or pieces of bloodworm or minnow help improve the attraction of your lures. 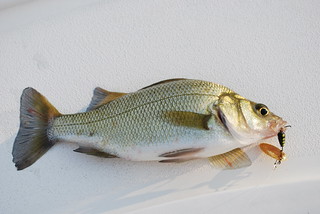 Anglers in the middle bay are focusing on fishing for white perch and catfish. The white perch are moving down the tidal rivers towards their spring and summer habitat. After a busy schedule of spawning in the upper reaches of the tidal rivers, they are eager to build up lost body stores. Fishing with bottom rigs near any structure is a good place to start. Dock and bridge piers, oyster reefs, and rock piles are all good places to fish with bottom rigs baited with grass shrimp or pieces of bloodworm. Some of the shallower locations such as shorelines with some reasonable depth and structure will also be good places to cast beetle spins and small spinners, and this type of white perch fishing will only get better with time. The early morning and evening hours are the best time for this kind of fishing.

Fishing for catfish is gaining more attention as mild weather and the striped bass closure cause anglers to look at other options. All of the tidal rivers hold healthy populations of channel catfish, and the Choptank River has quite a few blue catfish. Fresh cut menhaden, gizzard shad, or white perch make the best and most versatile baits when fished on a bottom rig.

The northern snakehead fishery has kicked into high gear with warmer water temperatures. This is perhaps one of the best times of the year to fish for northern snakeheads in the tidal rivers and creeks of southern Dorchester County. The thick grass of summer is still at a minimum, the mosquitos have not emerged in force yet, and the weather is mild. Casting white or pearl paddle tails rigged weedless with a 3/0 weighted hook makes one of the best lures time of the year. Large minnows fished under a bobber and dead-sticked is a good option to up the odds of picking up a northern snakehead in open water while fishing the shorelines from a small boat, kayak, or canoe. 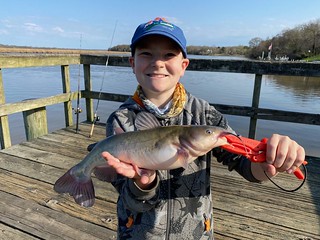 Fishing for hickory shad, northern snakeheads, white perch, and blue catfish are at the top of the list for anglers in the tidal waters of the lower bay. Hickory shad are still present in the tidal Potomac within the District of Columbia line. This catch-and-release fishery will not last too much longer, so if it is on your bucket list, this is the week to make the trip. There are a limited number of places to fish from shore, but endless possibilities for kayakers, small boats, or rental row boats. Casting heavy shad darts in the fast-moving water is the most popular way to fish, but small gold spoons and weighted flies also work well.

Blue catfish can be found in the tidal Potomac. The Fort Washington area tends to be one of the more popular places to fish and there is a good boat ramp there at a private marina. Fresh cut gizzard shad, white perch, or menhaden are the preferred baits. Stout tackle and heavy weight is needed when fishing for the larger blues that can easily top 50 pounds. The smaller blue catfish can be found on channel edges and nearby flats and shoals, and they make excellent eating. Blue catfish are also very prolific in the Patuxent, as well as the Nanticoke and Wicomico rivers on the Eastern Shore. Channel catfish can be found in all of the lower bay region’s tidal rivers.

White perch are showing up in the lower portions of the region’s tidal rivers. When fishing the deeper waters of the tidal rivers and creeks, use bottom rigs baited with grass shrimp or pieces of bloodworm. Gradually the white perch are moving into their typical late spring and summer habitats, and will be found near dock and bridge piers, sunken rocks, and wood and prominent points.

Fishing for northern snakeheads is very good this week as the warmer water temperatures have the fish on the move and aggressively feeding. A variety of baits are popular, particularly white or pearl colored paddle tails rigged with a large hook and cast near shoreline brush and snags. Chatterbaits are becoming more popular with warmer water temperatures. Live minnows are a good choice when fished under a bobber, they can be allowed to drift about in open water, while casting lures work along shorelines. The tidal Potomac, Patuxent, Nanticoke, and Wicomico rivers and their tributaries are all excellent places to fish for northern snakeheads.

The trout program stocking crews are busy placing as many fish in various trout management waters as possible, with special emphasis on the put-and-take areas. Flow conditions are very good in most areas of moving water, and the small community ponds that are stocked have cool water temperatures which help with trout surviving until lucky anglers catch them. The rainbow trout being stocked in the put-and-take areas can be caught on a variety of baits, but synthetic scented baits such as Powerbait top the list. More rainbow trout are caught on these baits than the traditional garden worm of yesterday. The crews will be stocking every weekday until April 30. The stockings will be posted each day after the trout are stocked on the trout stocking website. 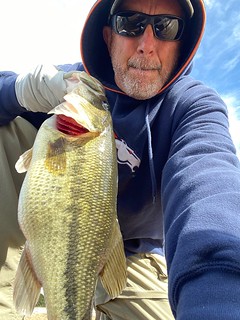 Herb Floyd takes a selfie with a chunky largemouth bass before releasing it. Photo by Herb Floyd

Deep Creek Lake is slowly warming up and fish such as largemouth bass are being found in the shallower areas along shorelines near emerging grass beds, sunken wood, and floating docks. Grubs, jigs, and crankbaits tend to be good choices for largemouth bass holding in the transition areas, while spinnerbaits and jerkbaits are a good choice in the slightly shallower waters. Smallmouth bass can be found along rocky points and sunken wood along the deeper shorelines. Walleye are active and can be caught along deep grass lines by drifting live minnows. Large yellow perch can be part of the mix when fishing this way. Northern pike are holding in the mouths of coves, and crappie are near bridge piers.

April is a good month to target crappie which are schooled up near structure. Marina docks, fallen tree tops, and sunken wood are all good places to check. The tidal rivers, reservoirs, lakes, and ponds usually hold good populations of crappie. The areas around the Wilson Bridge area of the tidal Potomac, the Nanticoke, Wicomico and other tidal rivers all hold crappie. Reservoirs such as Loch Raven, Triadelphia, Rocky Gorge, Deep Creek Lake, and smaller lakes and ponds all hold crappie. Fishing with small minnows or marabou jigs under a bobber is a proven tactic to catch them. The DNR website provides a list of various freshwater impoundments to fish for a variety of species. 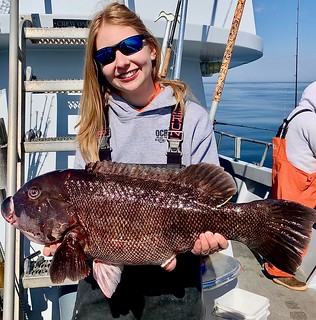 Surfcasters are enjoying mild weather at the beaches and good fishing for black drum. Clams and sand fleas tend to be the most popular baits. There are also sub-legal striped bass being caught along with the ever present clear-nosed skates.

Flounder are beginning to move through the inlet and into the coastal bay areas. This is just the beginning for those who love their flounder fishing. Since the water is a bit chilly, a falling tide which would bring warmer water off the shallower areas might offer some of the best fishing opportunities.

Fishing for tautog continues to be good to excellent on the offshore wreck and reef sites. A fair portion of the tautog being caught are reported to be in the double-digit category.

“Which of these is the wisest and happiest- he who labors without ceasing and only obtains, with great trouble, enough to live on, or he who rests in comfort and finds all that he needs in the pleasure of hunting and fishing?” — Attributed to a chief of the Miꞌkmaq nation.