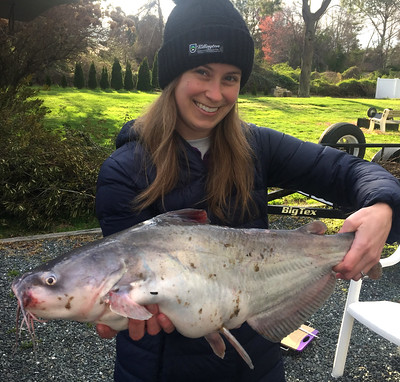 Angler Kate Morrison holds an invasive blue catfish she caught on the Nanticoke River — and destined for the dinner table. Photo by Sean Morrison

April offers many fishing opportunities to anglers, ranging from trout to invasive species such as northern snakeheads and blue catfish.

A reminder to anglers that all fishing for striped bass, including catch-and-release, is prohibited in the Chesapeake Bay or any of its tidal rivers — except the main stem of the Potomac River — for the month of April. The main stem of the bay will open to striped bass fishing on May 1 south of the Brewerton Channel.

A warm week ahead will help paint Maryland’s bay country with the blooms of redbud trees and spring flowers. It will also help warm up bay waters for striped bass, the yellow perch spawn, and the shad run in Maryland’s lower salinity waters. Bay surface water temperatures are approaching the mid 50s, although smaller streams and downwind areas will warm faster on a sunny day and can hold temperatures in the upper 50s. Little Falls on the Potomac River has water temperatures that have already reached 58 degrees, so hickory and American shad are there now. In addition, the main bay still has slightly warmer bottom waters, so anglers may want to scan these areas for other gamefish.

Expect average flows for most Maryland rivers and streams. There will be above average tidal currents all week as a result of the upcoming new moon April 12. Expect average clarity for the bay and rivers. To see the latest water clarity conditions, check Eyes on the Bay Satellite Maps.

Daily releases from the Conowingo Dam are below the average flow rates for this time of year, so shoreline fishing is easier at Fishermen’s Park and other access locations. All striped bass fishing is off limits, including catch and release, so anglers are targeting catfish. Flathead catfish can be caught in the dam pool by casting from downriver with heavy spinning tackle using fresh gizzard shad baits on a circle hook. Blue catfish can be caught in the lower river, the Susquehanna Flats, and near the mouth of the Elk River. If you are using cut bait for catfish, circle hooks must be used until May 1 in the upper bay, unless you are using a J-style hook with a gap of less than a half-inch.

Channel catfish are also numerous and will always make up a fair portion of the catch. Fresh gizzard shad, cut white perch, chicken liver, and clam snouts all make good baits. Channel catfish can be found in all of the upper bay region’s tidal rivers. Blue catfish can also be found in the Chester River from Chestertown up to Crumpton.

In several of the region’s tidal rivers, fishing for white perch continues to be fair to good depending on each particular river. The Bush and Magothy rivers have been offering good fishing for white perch, while reports from the upper Chester and Bohemia indicate fair results. At this point of the white perch spawning runs, there tends to be larger numbers of small fish, and even those will begin to move downriver soon.

As a reminder to everyone, no fishing of any kind is allowed for striped bass in any portion of the Chesapeake Bay’s middle bay region until May 1. Striped bass will spawn soon in the upper Choptank River, depending on warming weather.

The white perch spawning runs are still in gear in the upper Tuckahoe and Choptank rivers this week but are showing signs of slowing down. The upper spawning reaches are packed with smaller white perch, which are often males, and the large female white perch above 10 inches are becoming harder to find. Casting small shad darts, often in tandem and tipped with grass shrimp or a piece of bloodworm or minnow have been the most popular ways to fish. Those more adventurous may try to intercept the larger post-spawn female white perch farther downriver as they head towards the bay. Post-spawn yellow perch can also be encountered when fishing below the spawning reaches. 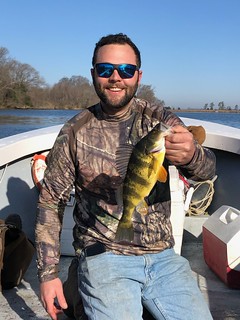 Fishing for a mix of channel catfish and white catfish are providing plenty of fun fishing in the tidal rivers of the middle bay region this week. The Choptank River in addition offers opportunities to catch blue catfish in the Dover Bridge section of the river. The old Dover Bridge has been converted into a shoreline fishing area on the east side of the river –be sure to not try to access the west side. The continuation of the area for fishing depends on anglers not trespassing on the west side, for safety reasons. There is plenty of parking on the east side and is handicap accessible.

Fresh cut bait of white perch makes one of the easiest baits to acquire, just bring a few bloodworms or garden worms with you to catch bait. Other good baits to use are clam snouts and chicken liver. Anyone fishing for catfish in the tidal rivers must use circle hooks until May 1, unless using a J-style hook with a gap of less than a half-inch.

Fishing for northern snakeheads has hit high gear in the rivers and creeks of southern Dorchester County, with warm sunny weather that has the snakeheads in an aggressive feeding mode. Casting light colored paddle tails with keeled wide gap hooks has been the most popular way to fish for them –white and pearl are the two most outstanding colors. Fishing with large live minnows under a bobber is another good method, but keep in mind circle hooks must be used until May 1, unless you are using a J hook with a gap of less than a half-inch.

The lower bay is closed to all striped bass fishing and targeting, including catch and release, until May 1, so many anglers are focusing their attention on other fish species or continuing touch-up work on their boats. The main stem of the Potomac River is open to catch-and-release during April, but anglers need to take note that the Maryland tributaries to the Potomac are closed during that time. 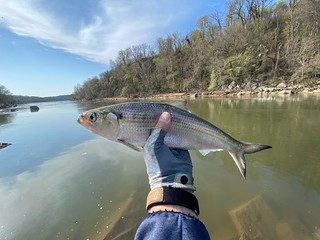 The annual Hickory and American shad spawning runs are in full gear in the tidal portion of the river within the District of Columbia boundary lines, so Maryland anglers will need to purchase a D.C. fishing license.

Casting shad darts and small flashy spoons are two of the most popular ways to fish, either from shore, kayaks or rowboat rentals, at Fletcher’s Landing. Fly fishing with weighted lines and brightly colored flies is always a fun option. This is strictly a catch-and-release fishery so take care when handling and releasing fish.

Fishing for blue catfish in the tidal Potomac is a great opportunity for anglers to enjoy some exciting action and excellent table fare as well. Fresh cut baits of gizzard shad and white perch are two of the most popular baits, but clam snouts, chicken liver, and prepared catfish bait can work well also. The Nanticoke and Patuxent rivers also hold large numbers of blue catfish.

White perch can still be found in the upper reaches of the region’s tidal rivers and creeks. The peak of spawning activity has passed in many areas but there are still plenty of white perch available. Casting shad darts tipped with grass shrimp or pieces of bloodworm or minnow are the most popular way to catch them. Fishing with a bottom rig baited with pieces of bloodworms works well in deeper waters.

Trout anglers continue to enjoy fishing in the put-and-take areas as well as other management waters, such as delayed harvest and catch-and-release. The stocking crews placed more than 130,000 trout for the traditional opening day March 27, so there should still be good trout fishing to be found. The next trout stocking burst will take place April 19-30. Details on all stocking operations can be found at the department’s trout stocking website. 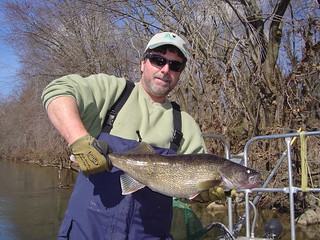 Maryland DNR fisheries biologists recently conducted the annual spring walleye survey on the upper Potomac River at Taylor’s Landing. More than 80 walleye were collected by electrofishing during their spring spawning run up to Dam 4. Fish ranged in size from 10 inches to 25 inches. Roughly 75 percent of the collected fish were in the 15-inch to 20-inch slot range. Thirty adult fish were transported to Manning Hatchery, where they will serve as broodfish for this year’s statewide juvenile production. Supplemental stocking of hatchery produced juvenile walleye is important to maintain this popular fishery on the Potomac River. The adult walleye broodfish will be returned to the upper Potomac.

Fisheries biologists also tagged 19 muskellunge as part of a radio tracking study on the upper Potomac River. Fish were collected in the section of river downstream from Dam 5. Each fish was implanted with a small internal radio transmitter. This project is part of ongoing work looking at the movement and survival of muskie post-angling. Fish were also tagged with an external yellow dart tag. Anglers who catch a tagged muskie are asked to report the four-digit number by calling the phone number on the tag.

Largemouth bass in the central, southern, and eastern regions are beginning to approach their spawning time. In many areas, male largemouth bass are preparing spawning nests. Last week’s cold spell did push the timing back a bit, but warmer weather will bring female largemouth into shallower waters. Submerged grass beds are expanding and emergent plants along shorelines and flats are growing. A wide variety of baits will work this time of the year since the fish are feeding so aggressively. Jerkbaits, spinnerbaits, soft plastic, and crankbaits all work well in transition areas, and grubs and jigs are a good choice for bass holding to deep submerged wood.

Northern snakeheads will be a common species to encounter for anglers fishing for largemouth bass in the fresher tidal waters in the central, southern, and eastern regions of Maryland. They will crash the same lures used for largemouth bass and do provide a good eating fish to take home. 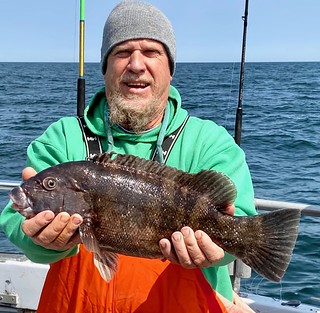 The Ocean City fishing scene is beginning to respond to spring. In the surf along the Ocean City and Assateague beaches, anglers soaking clam, sand flea, and cut baits are catching some medium-sized black drum.

In and around the inlet and back bay areas, the first flounder of the season are being caught. The fishery is just beginning but it is a good start. Reports of good crabbing are coming from the back bay areas, as the crabs finally felt it was warm enough to wake up from their winter’s sleep. There has also been some catch-and-release fishing with striped bass near the Route 90 Bridge. Most of the striped bass being reported are well below the 28-inch minimum but still offer some fun on light spinning gear.

The offshore wreck and reef sites continue to provide good to excellent fishing for tautog depending on favorable weather conditions. Many of the tautog being caught are impressive in size, and there tends to be plenty of room along the rails. Captains do mention that they have to move from site to site at times, and once the current gets ripping fishing success drops.

“Every day I see the head of the largest trout I ever hooked, but did not land.” — Theodore Gordon 1914