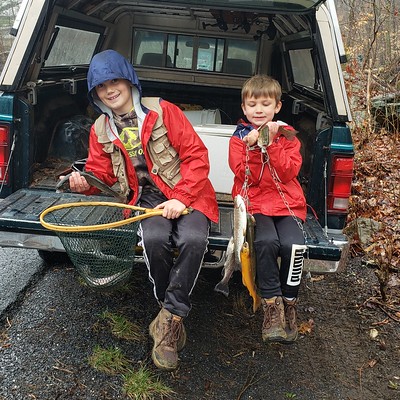 To anglers and hunters, a traditional opening day can be described as Christmas and your birthday rolled into one. This Saturday, March 27, marks what many consider the opening of the spring trout season in Maryland. The trout hatchery and stocking program has worked hard under some tough conditions to bring the public the best trout possible so don’t miss the fun this weekend and for the next couple of months. This is a wonderful way for families and our younger anglers to enjoy fishing.

With a string of warm March days, Chesapeake Bay waters will continue to slowly warm up for gamefish activity, like the shad run in the next couple of weeks in Maryland’s lower salinity waters. Main Bay surface water temperatures have risen to the upper 40s, although smaller streams and downwind areas will warm faster on a sunny day and can hold temperatures in the low 50s. For example, Little Falls on the Potomac River has water temperatures that have already reached 54 degrees, so the hickory and American shad should be spawning very soon. Also, there are still slightly warmer bottom waters so anglers may want to scan these areas for other gamefish. 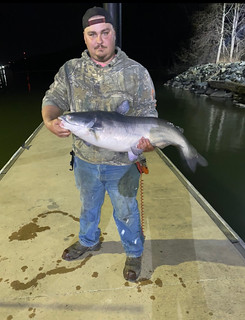 Water releases at the Conowingo Dam have been steady, just above average, which is good for stable water flows in the lower Susquehanna River. It is still a little early for the white perch run in the lower Susquehanna, but anglers are geared up for the yellow perch spawning runs in the North East River. The action was reported to be slow last weekend, but this week’s warm weather should spur them into action.

North East Community Park is a popular place to fish for yellow perch, with good parking and access to the water. One of the most productive ways to fish from there is out on the docks, casting lip-hooked minnows on shad darts or drop shot rigs retrieved very slowly along the bottom.

Most of the yellow perch action tends to be in the Sassafras, Bohemia, Chester, Bush, and Magothy rivers, but post-spawn yellow perch can be caught in areas below the spawning reaches. Minnows rigged on shad darts or bottom rigs tend to be two of the best ways to catch them. White perch are staging in these same rivers, and water temperatures are expected to rise enough to present good fishing opportunities in the upper reaches of the rivers.

The Susquehanna Flats striped bass catch-and-release season is starting to gain the attention of anglers looking for some early striped bass action. The season is open until March 31 and then will be closed to any kind of striped bass fishing until May 16. The northernmost boundary of this fishery is a line drawn from the Susquehanna State Park boat ramp across the river to Twin Rocks, to Tomes Wharf in Port Deposit and the North East River. The southern boundary is a line drawn from Turkey Point to Sandy Point.

At this time anglers are seeing mostly smaller male striped bass. Casting soft plastic jigs and topwater lures in the morning and evening hours are producing some of the best results. The large female striped bass will begin to arrive soon. Since this is a catch-and-release fishery with pre-spawn striped bass, great care and preparation are required when handling fish. Have a plan in regard to releasing fish in the water and if a picture is to be taken, someone should be ready ahead of time. The fish should be handled horizontally and supported, and returned quickly. 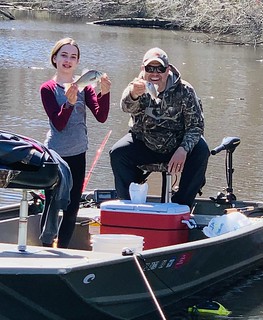 Grace Ziegler got to spend a fun day fishing for white perch this week with her dad on the Choptank River. Photo by Rich Watts

Anglers are reporting excellent catches of white perch in the upper sections of the Choptank and Tuckahoe rivers this week. Most are casting shad darts tipped with grass shrimp or bloodworms and jigging along the bottom in the deeper holes in the rivers. There tends to be a lot of small perch, but most anglers can put together a catch of nice white perch by the end of an outing.

Those fishing near Denton and the lower Tuckahoe are also catching post-spawn yellow perch. Minnows on a bottom rig are best to use for yellow perch, but more than a few anglers are catching them on shad darts and bottom rigs tipped with grass shrimp and pieces of bloodworm, which is meant for white perch.

A few boats are venturing out on the bay exploring striped bass catch-and-release possibilities this week. Most will be trolling the required six lines or less, usually pulling parachutes or bucktails without stinger hooks. Others will be light-tackle jigging along channel edges when fish can be seen on depth finders, or jigging at the Calvert Cliffs Power Plant warm-water discharge. The striped bass catch-and-release season for the Maryland portion of the Chesapeake Bay is open through March 31 and then will be closed the month of April. The spring trophy striped bass season will open May 1, with a limit of one fish per person per day at a minimum length of 35 inches. The Maryland Department of Natural Resources will soon post the regulations for the summer-fall striped bass season.

There is plenty of fun fishing action for channel catfish in all of the middle bay tidal rivers. They can be caught on fresh cut baits of white perch, gizzard shad, clam snouts, chicken liver, or nightcrawlers, although with white perch in the neighborhood nightcrawlers tend to get chewed up fairly rapidly. Blue catfish can be found in the Choptank River near the Dover Bridge. The Sharpstown area of the Nanticoke River is also an excellent place to fish for blue catfish. 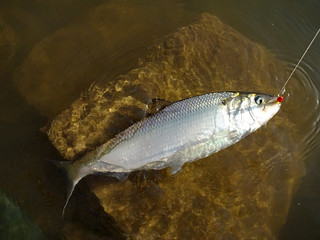 The tidal Potomac River is coming alive with the first American shad and hickory shad. The vanguard has arrived and with extremely warm temperatures by the end of the week, this catch-and-release fishery may very well be in good shape by the weekend. The area known as Fletchers is one of the best places to access the fishery from shore, a rowboat, or a kayak. One will need to purchase a Washington, D.C. fishing license to fish there.

Fishing for blue catfish is very good in the tidal Potomac, and now that pre-spawn striped bass are moving into the river, care must be taken when fishing with fresh cut baits of white perch and gizzard shad. Non-offset circle hooks need to be used when fishing for catfish in case a striped bass picks up a bait. You need to release any striped bass while it’s still in the water. The tidal Patuxent and Nanticoke rivers also have large populations of blue catfish. All of the region’s rivers hold good populations of channel catfish which can be caught on a variety of baits.

White perch are ascending all of the tidal rivers within the lower bay region. The fishing has been excellent in the Nanticoke, Wicomico, and Pocomoke rivers on the Eastern Shore. The Potomac and Patuxent as well as their tributaries are also experiencing white perch spawning runs this week. Casting shad darts tipped with grass shrimp or pieces of bloodworm or minnows are one of the best ways to target them.

With the warm daytime temperatures predicted, boats will be loaded with those trying their luck with some striped bass catch-and-release fishing in the bay. Most boats may opt to troll and will be working the steep channel edges with parachutes and bucktails — they must be limited to six lines or less, and lures must not have stinger hooks. Light-tackle anglers will be exploring channel edges with depth finders looking for opportunities to jig over concentrations of striped bass.

A lot of trout anglers will spend a sleepless night this Friday, and no doubt will be watching their alarm clocks. All Closure 1 and 2 trout management waters will be open to put-and-take trout fishing at 5:30 a.m. on Saturday, March 27. Many know exactly where their favorite spot is, and plan to get there early to be ready to go at the opening of the traditional opening of trout season.

All of the Closure 1 and 2 areas have been stocked with generous numbers of rainbow and golden trout. There will also be trophy-sized trout stocked at each location. With the pandemic, trout anglers will need to understand that stocking crews have been under some severe restrictions — only one staff member per vehicle, and no volunteers to float stock and spread trout over wider areas. Anglers may find trout in greater numbers than they’re used to near the stocking truck access points. Those who cannot wait for Saturday have the opportunity to fish many of the Closure 0 ponds that were stocked this week. Check out the trout stocking website to see which ones are near you and get out and enjoy the beautiful weather. The upper Potomac River is in good shape with water levels, and fishing for smallmouth bass and walleyes is looking good. Water temperatures are in the mid 40s and water clarity is good. Small soft plastic jigs and suspended jerkbaits have been excellent choices for smallmouth bass. These same lures can work well for walleyes, as can live minnows. 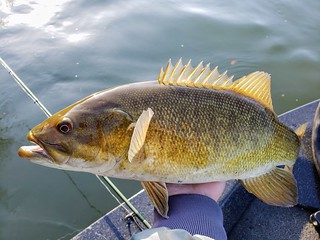 John Mullican takes one last look at a beautiful smallmouth bass before slipping it back into the river. Photo by John Mullican

Largemouth bass are becoming very active as water temperatures increase and they begin pre-spawn behavior. They are holding in transition areas that are shallower than the deeper channels and holes where they spent the winter months. Targeting fallen treetops, sunken wood, and creek mouths are good bets. Grass beds and emergent plants are beginning to show progress, but right now there are few places for bait to hide and the bass are taking advantage of that situation. Spinnerbaits, lipless crankbaits, jerkbaits, and a variety of soft plastics are all good choices for baits.

Northern snakeheads are reacting to the warmer water temperatures, and daytime air temperatures are predicted to be even higher by the weekend. This weekend could very well be a kickoff to the northern snakehead fishing season. Fishing with large minnows under a bobber or casting white paddle tails will be two of the most popular ways to fish. The tidal Potomac and its creeks are traditional areas to fish, but the lower Dorchester County rivers and creeks hold large populations of snakeheads. The tidal Patuxent, Chester, Nanticoke, Wicomico, and Pocomoke rivers also hold populations of snakeheads. Just about every tidal river system in the Chesapeake holds the chance to catch snakeheads, often while fishing for largemouth bass. 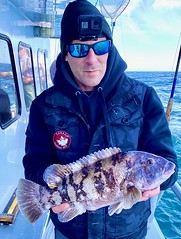 Recent calm weather has allowed charter and party boats to venture out to the reef and wreck sites in search of tautog, and some large ones have been caught. Many are being tagged and released to better understand population dynamics and migration patterns.

“For every fisherman there’s a ghost fish that, along with the memory of the knot that slipped, the line that snapped, or the hook hold that gave, will haunt his dreams forever.” — Luke Jennings