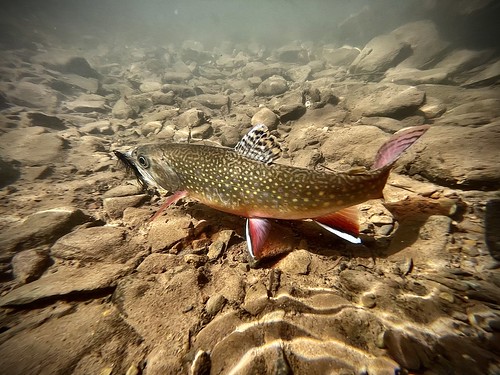 The picture reveals why the brook trout is one of the most beautiful trout species. Photo by Ryan Cooper

The brook trout is Maryland’s only native trout and because it demands cool, clear water its range has been greatly impacted by environmental changes, natural and manmade. It is now mostly found in the most pristine waters of western Maryland. Fishing for brook trout is restricted to catch and release only and fishing tackle is often limited.

A reminder to shad anglers that are looking forward to the upcoming spring run –  The Maryland Department of Natural Resources is recruiting participants for the shad volunteer angler survey. This brief online survey is smartphone compatible and provides valuable information for the restoration of these prized fish. Anglers are invited to log their shad fishing trips, even if you don’t catch any shad.

Boaters should note that beginning April 1, the U.S. Coast Guard will require kill switches on all boats that are less than 26 feet in length with outboard motors of 3hp or more and the helm is not in an enclosed cabin. This law is applicable to all tidal waters that are under the jurisdiction of the Coast Guard and is an attempt to prevent runaway boats when the driver is thrown from the vessel. More information is on the Coast Guard website.

Variable temperatures and winds continue typical March conditions. With these longer and increasingly warmer days, Chesapeake Bay waters will continue to slowly heat up for gamefish such as yellow perch, which are spawning or preparing to spawn in the next couple of weeks. Main Bay surface water temperatures have risen to the mid 40s, although smaller streams and downwind areas will warm faster on a sunny day and can hold temperatures in the upper 40s. Areas with these temperatures and low salinity will be prime locations for spawning yellow perch as they move up from their wintering areas in the downstream portion of rivers. Also, there are still slightly warmer bottom waters so anglers may want to scan these areas for other gamefish.

To see the latest water clarity conditions, check Eyes on the Bay Satellite Maps. There will be above average tidal currents on Wednesday and Thursday as a result of the March 13 new moon.

Last week’s warm weather spurred yellow perch to ascend the upper bay’s tidal rivers to complete their spawning activity. Anglers in the North East, Bush, Magothy, Sassafras, Bohemia, and Chester rivers enjoyed good fishing over the weekend. That can be continued this week with fishing for males and post-spawn females. Small live minnows on a bottom rig and shad darts tipped with a small minnow or fish bait scent all work well.

White perch are moving towards the spawning areas about midway up the tidal rivers. The only exception is the lower Susquehanna River where water temperatures are traditionally colder due to the deep-water discharge from the Conowingo Dam. The best baits for white perch in the deeper waters of the tidal rivers are grass shrimp and bloodworms on a bottom rig. Once they enter the shallower waters of the spawning reaches, using shad darts is a great way to fish and save on bait when tossing back a lot of small perch. Tipping the shad darts with a grass shrimp or a piece of minnow helps entice the perch. 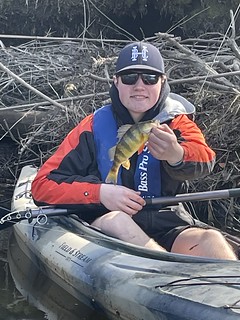 Tommy O’Connell holds up a male yellow perch for a quick photo. Photo by Tom O’Connell

Many anglers hoped the yellow perch spawning runs in the Tuckahoe and Choptank rovers would hold off until the weekend, but alas the yellow perch had other ideas, as water temperatures in the spawning reaches jumped to 50 degrees. For those who could not get free during the week, it was a classic case of “you should have been here yesterday”. Those who arrived at Hillsboro on Friday found strings of egg cases hanging in submerged branches and large post-spawn female yellow perch, and plenty of 10-inch male yellow perch still ready to party. The same could be said for the upper Choptank River.

Those fishing with small minnows in the upper Tuckahoe and Choptank rivers were able to put together catches if they worked hard in the deeper wood debris-choked holes. Small to medium-sized largemouth bass and chain pickerel can also be part of the mixed bag when fishing with live minnows.

The white perch began to show up in the Denton to Greensboro area on the upper Choptank, with the best catches coming in the Greensboro section of the river. Shad darts tipped with grass shrimp tended to be the best tactic when fishing for white perch. As the numbers of white perch increase this week, it will be easy to burn through a supply of grass shrimp. A piece of minnow on a shad dart will often provide enough smell and taste enticement during the height of the spawning runs.

If you can find a section of the river with good depth and generally clear of snags, cast upstream at a 45-degree angle and allow the shad dart to sink to the bottom. All the while keep slack line and gently jig as the shad dart sweeps along the bottom, until it is positioned downstream at a 45-degree angle — then repeat. Most strikes will occur as the shad dart sweeps past you. Other options include fishing with pieces of bloodworm or grass shrimp on a bottom rig, or using a slip bobber baited with grass shrimp and allowing it to drift in the current.

It is delightful to see recent alewife herring spawning along the river banks of the Tuckahoe and Choptank rivers. They have been busy chasing each other in swirling schools in the main river and its smaller tributaries. The alewife herring will soon be followed by blueback herring, and finally by hickory and American shad.

Other fishing options are blue catfish in the Choptank River, in the general area around the Dover Bridge. Channel catfish can be found in most of the upper areas of the Severn and Choptank rivers. All can be caught on fresh cut bait of white perch or gizzard shad. Channel catfish can also be caught on nightcrawlers, clam snouts, or chicken liver.

White perch are showing up right behind last week’s yellow perch in all of the tidal rivers within the region. Anglers fishing the Pocomoke, Wicomico, and Nanticoke rivers are all reporting good catches of white perch. The Potomac River and its tributaries as well as the Patuxent River are also reporting white perch moving towards the upper regions of the rivers.

Finally, a reminder that DNR biologists are tagging blue catfish in the Patuxent River to learn about their movements. Anglers are asked to not remove the tags but report location and date of catch to the phone number listed on the tag. More information is available on the department website.

Although the Closure 1 and 2 put-and-take trout fishing areas are closed until March 27, the Closure 0 areas continue to be stocked with trout. Most of these trout waters are lakes and ponds and they are getting generous stockings. The ponds offer safe and easy access for our younger anglers, and some are set aside for their exclusive use. Be sure to check the trout stocking website to see the areas stocked this week.

Warming water temperatures are driving largemouth bass to aggressively feed in transition zones between the deeper channels and the shallow areas. They are beginning to feel the pre-spawn urge to stock up on prey to build up body stores. Grass beds are beginning to emerge slowly, and in the meantime sunken wood will draw the attention of largemouth bass, as will creek mouths. A variety of crankbaits, spinnerbaits, jerkbaits, and soft plastic craws will all be good choices for largemouth bass.

Northern snakeheads are waking up from a winter of inactivity and are slowly becoming available to anglers. Fishing with large minnows under a bobber is a proven way to entice sluggish northern snakeheads. Casting white paddle tails is another alternative as waters warm.

Crappie are slowly moving out of their winter deep-water haunts and can be found holding near structure such as bridge piers, marina docks, and fallen tree tops in deep water. They will be holding at 6 feet or so. A small minnow or a marabou jig on a slip bobber are two of the best ways to catch them. 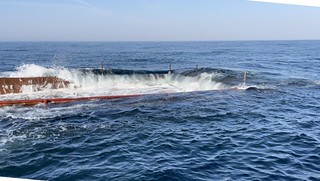 The boats that have been heading out to the wreck and reef sites continue to bring back catches of tautog.

The Ocean City Reef Foundation, with the help of financial contributors, has been making substantial progress in creating new fishing habitat off Ocean City. The latest contribution was a 200-foot barge that was sunk recently on Crocker’s Reef.

“No angler merely watches nature in a passive way. He enters into its very existence.” — John Baily