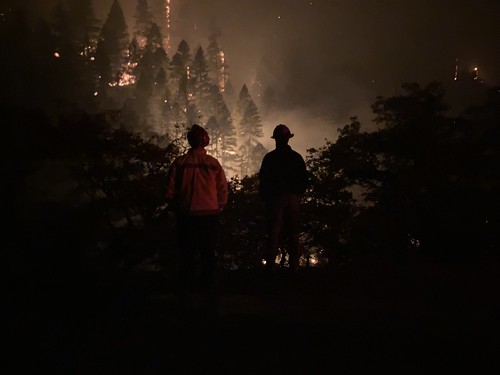 Last year, 65 Maryland fire crew members participated in 103 assignments, working on 28 different incidents in 11 states. The 2020 Interagency Wildfire Season began early in the year, with new protocols developed to  mobilize firefighters in the midst of the COVID-19 pandemic. Crews also served an exceptionally long season, serving in deployments as late as November.

“You worked long hours, spent weeks away from your loved ones, braved extremely dangerous conditions, and truly risked life and limb to save lives, homes, and precious natural resources,” Governor Hogan said. “When our fellow Americans face unthinkable natural disasters, Maryland stands ready to come to their aid … thanks to your bravery and dedication.”

Interagency Wildland Firefighters are mobilized through the state’s interagency agreement with the U.S. Forest Service, in which multiple states’ personnel and resources deploy to wildfire incidents across the country as needed. In 2020 they included the Maryland Forest Service fire management team, a mobilization/demobilization team, firefighter modules and crews, engine and dozer operators, and single resources, who are individuals with specific skills who serve in both overhead and support functions.

“It was an extraordinarily long and tough wildfire season with over 58,000 wildfire incidents across the United States, but you rose to the occasion,” said Secretary Jeannie Haddaway-Riccio. “In fact many times you were deployed for so long that we had to switch out crews to give you respite. While many of us were working from the comfort of our homes, you were battling the elements to protect our nation’s natural resources.”

As the Maryland Department of Natural Resources begins preparing for the 2021 wildfire season, they are also being called upon to assist with the nation’s response to COVID and the need to expedite vaccinations. For 2021, Maryland’s interagency team has already received its first mobilization request from the U.S. Forest Service, and will send two EMT-certified individuals to Delaware to support a COVID vaccination center at Dover International Speedway

Maryland Department of Natural Resources staff comprise the majority of those deployed — in 2020 they included 30 employees from the Maryland Forest Service, 14 from the Maryland Park Service, and one staff member from Fishing and Boating Services. In addition, members of Volunteer Fire Departments, retired DNR staff members, an employee of the U.S. Fish and Wildlife Service, and others comprised the team.

The Interagency Wildfire team for 2020 included the following individuals, along with their home county:

During 2020, other members of the Forest Service mobilization/demobilization team were:

In Maryland, the Forest Service responds to an average of 200 wildfires per year that burn about 2,200 acres. These incidents are typically larger than fires in the urban areas and often require specialized equipment and tactics to contain and control. Maryland’s busiest wildfires seasons typically occur in the spring and fall.