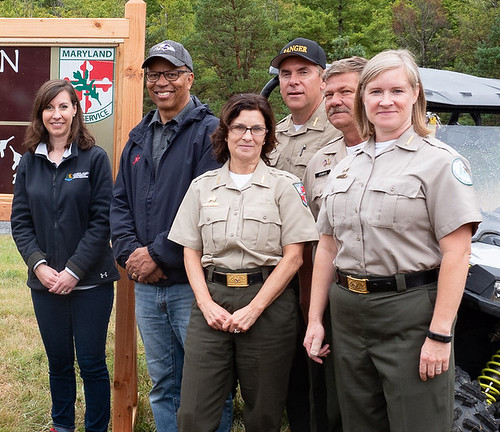 Superintendent Settina has led the Maryland Park Service since 2008, when she became the first woman to lead the state’s park system since its establishment in 1906. The Distinguished Service Award is presented to a state park director who has demonstrated a long-term, sustained record of professional accomplishment in the field of park and recreation management.

On Superintendent Settina’s watch, several new state parks have been added or expanded, including Harriet Tubman Underground Railroad, Newtowne Neck, Wolf Den Run, and Sang Run, and all-time attendance records have been broken almost yearly — including a remarkable 21 million visitors in 2020. In presenting the award, the NASPD also noted her work with underserved communities, including the creation of the Conservation Jobs Corps, which now provides jobs for 300-400 youth each year, and her leadership role in establishing the Children in Nature initiative. In addition, Nita was lauded for her work in resource management, including the protection of tens of thousands of hemlock and ash trees from deadly invasive forest pests, such as the hemlock woolly adelgid and emerald ash borer.

“Nita has been deservedly honored among her national peers — her success can be measured in many ways, perhaps none more telling than the 21 million visitors who safely enjoyed Maryland State Parks this year,” said Maryland Secretary of Natural Resources Jeannie Haddaway-Riccio. “Nita has overseen a Maryland park service that has expanded access and broken barriers. Her recognition is most fitting in a year that was declared Year of the Woman by Governor Larry Hogan.”